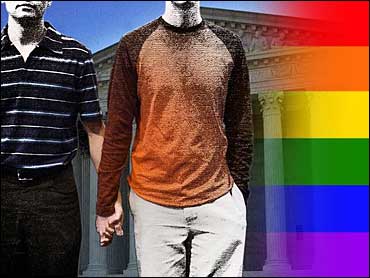 Opponents of gay marriage went to court Friday to stop an extraordinary act of ongoing civil disobedience in which San Francisco has issued nearly 100 marriage licenses to gay couples.

Weddings were continuing Friday and over the long holiday weekend — despite the effort by the Campaign for California Families to obtain a restraining order that would prevent the city from issuing more licenses or performing more ceremonies inside City Hall.

But under normal legal procedures and because of Monday's President's Day holiday, it appeared unlikely that anyone would succeed in blocking the gay marriages before Tuesday.

"Frankly it was a brilliant strategy. They got it done. The unfortunate fact is that these people who think they are married may find out Tuesday they are not," Richard Ackerman, an attorney for the conservative group, said Friday.

Around the country, gays and lesbians emboldened by San Francisco's move and by the constitutional debate over gay marriage in Massachusetts went to courthouses Thursday and Friday demanding their own marriage licenses — and getting summarily rejected, since every state in the nation bans gay marriage.

Massachusetts lawmakers, unable to reach a decision on the amendment, agreed to postpone further debate until next month.

The constitutional convention reconvenes on March 11th. It's important to remember that if an amendment goes through, there is still a long way to go before it would become law, reports Dan Rea, News Correspondent for CBS Boston affiliate WBZ.

The amendment will have to survive another constitutional convention next year. If it passes then, it would then go to the voters of Massachusetts, as a referendum on the ballot in 2006.

But in San Francisco, with the blessing of newly elected Mayor Gavin Newsom, the county clerk has issued nearly 100 marriage licenses to gay couples. Many of the weddings have taken place in quick civil ceremonies inside the ornate City Hall, and the clerk's office planned to remain open Saturday in observance of Valentine's Day.

"I'm not interested as a mayor in moving forward with a separate but unequal process for people to engage in marriages," Newsom said in an interview Friday on ABC News' "Good Morning America." "I think the people of this city and certainly around the state are feeling that separate but unequal doesn't make sense."

In all, 87 couples took their vows on the spot Thursday. By Friday morning, 300 more had lined up to get their licenses, many of them driving from as far as Los Angeles.

"Even people who are anti-gay marriage might shift their thinking now and realize it's most harmful to take something away when someone already has it," said Virginia Garcia, 40, after wedding Sheila Sernovitz, 50, her partner of 14 years.

They city's bold move, however, caused an outcry from elected officials and groups opposed to gay marriage.

Campaign for California Families asked that a Superior Court judge issue a restraining order that would prevent the issuance of any more licenses to the same-sex couples, to void any licenses that have been granted, and to require city officials to abide by the rules that govern changes in law.

"Apparently, Mayor Newsom felt he's above the law and like a dictator, could simply dictate what the law should be. And he has no authority to do that, either under the city charter or state law," Ackerman said.

While it remains unclear what practical value the marriage licenses will carry, their symbolism was self-evident as lawmakers in Massachusetts debate a constitutional amendment that would ban gay marriage but legalize civil unions.

City officials tried to keep the first marriage — between longtime lesbian activists Phyllis Lyon, 79, and Del Martin, 83 — confidential so they could complete it before any court intervention. The pair, who will celebrate 51 years together on Valentine's Day, were wed by San Francisco Assessor Mabel Teng at 11:10 a.m. in a closed-door ceremony.

Afterward, Lyon said she "never dreamed" that she and Martin would be wed within their lifetimes, but that she was excited "to make it legal." Newsom was not present at that ceremony, but later presented the couple with a signed copy of the state constitution with sections related to equal rights highlighted.

"I don't think there is anyone in good conscience who can tell me that denying the same rights my wife Kimberly and I have to same-sex couples is anything but discrimination," said Newsom, who maintains the equal protection clause of the California constitution obliges the city to grant marriage licenses to gay and lesbian couples.

As word spread about the marriages, couples rushed to City Hall, most dressed casually in jeans with hastily assembled witnesses, and holding hands as they waited in a long line to pay their $82 license fee. The marble passages beneath City Hall's ornate golden dome echoed with applause as jubilant couples breezed through brief ceremonies, promising to be "spouses for life" instead of husband and wife.

"There is a part that doesn't feel romantic at all, but obviously it feels historic," said Guillermo Guerra, 29, who married Andrew Parsons, 39, his partner of eight years.

Many state officials, including Gov. Arnold Schwarzenegger, shied away from commenting on the events. Attorney General Bill Lockyer said through a spokeswoman he has not been asked to issue an opinion on the legality of same-sex marriages under California law.

But Lockyer has asked his civil rights enforcement section to review how Massachusetts' legal debate might apply to California law.

The Massachusetts Legislature, to undo the high court ruling by rewriting the state constitution, must pass an amendment with at least 101 votes in two consecutive legislative sessions — this year and in 2005-06 — before it winds up on the ballot before voters in November 2006. The most votes any of the varying amendment proposals received Wednesday and Thursday was 98.

Thirty-eight states and the federal government have approved laws or amendments barring the recognition of gay marriage.