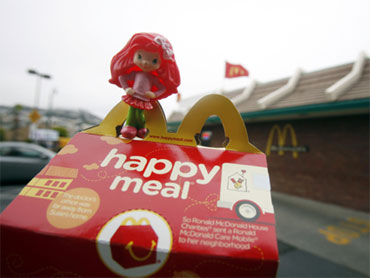 It's a happy moment for people who see the Happy Meal as anything but. San Francisco has become the first major American city to prohibit fast-food restaurants from including toys with children's meals that do not meet nutritional guidelines.

The city's Board of Supervisors gave the measure final approval Tuesday on an 8-3 vote. That's enough votes to survive a planned veto by Mayor Gavin Newsom.

The ordinance, which would go into effect in December of next year, prohibits toy giveaways in fast-food children's meals that have more than 640 milligrams of sodium, 600 calories or 35 percent of their calories from fat. The law also would limit saturated fats and trans fats and require fruits or vegetables to be served with each meal with a toy.

"Our effort is really to work with the restaurants and the fast-food industry to create healthier choices," said Supervisor Eric Mar, the measure's chief sponsor. "What our kids are eating is making them sick, and a lot of it is fast food."

The legislation is a big victory for activists and public health advocates who have charged food marketers with being complicit in the country's growing childhood obesity rates. They hope other cities and counties nationwide will follow their lead.

"This will be a sign to the fast-food industry that it's time to phase out its predatory marketing to children at large," said Deborah Lapidus, a senior organizer with Boston-based Corporate Accountability International, a watchdog group that supported the legislation.

Supervisors and activists who support the measure say they hope obesity-curbing efforts like the one approved Tuesday will eventually spread to other cities, states and the country. A similar ordinance has already been approved in California's Santa Clara County, where it affected about a dozen restaurants.

Newsom, meanwhile, said he plans to veto the ordinance, which he called an "unwise and unprecedented governmental intrusion into parental responsibilities and private choices."

The mayor issued a statement after Tuesday's vote saying the city must continue to combat childhood obesity but the ordinance takes the wrong approach.

"Parents, not politicians, should decide what their children eat, especially when it comes to spending their own money," Newsom said.

The industry, which favors self-regulation, says there is no evidence that San Francisco's law will halt the expanse of children's waistlines and the diseases associated with obesity, such as hypertension, diabetes and heart disease.

McDonald's and Burger King Corp. are among 17 major food and beverage marketers who have signed on to the Children's Food and Beverage Advertising Initiative, a self-regulation effort run by the Council of Better Business Bureaus.

McDonald's says its meals advertised to children meet government nutritional standards, limiting total calories to 600 per meal and capping fats and sugars. The company also agreed to curtail advertising in schools and promote healthy lifestyles in all marketing efforts directed at children.

"McDonald's remains committed to responsible marketing practices, including advertising and promotional campaigns for our youngest customers," McDonald's senior vice president for marketing, Neil Golden, said in a statement to The Associated Press.

McDonald's sent several senior executives and others to San Francisco to oppose the measure in person.

As it was being drafted, amended and discussed over several months, Corporate Accountability ran a local newspaper advertisement signed by physicians, community activists and small restaurants that called on Board of Supervisors swing voter Bevan Dufty to support the measure.

Dufty eventually did so, saying San Francisco should not wait for the federal government to act and should serve as an example to other cities.

"I don't care how much they say, 'It's San Francisco, they're whacked out there, it doesn't matter,' the reality is they're taking notice," Dufty said.

Scott Rodrick, who owns 10 McDonald's restaurants in San Francisco, is worried the new ordinance could hurt his business because families account for many of his customers and they could drive a mile away to another city to buy Happy Meals.

"I think this legislation on the margin is a lot of misplaced energy," Rodrick said. "For the government to step in and tell me where I feed my kids and how I feed my kids is not a good day for parents in the city, including for me."

Fast-food restaurants spent $161 million advertising to children under 12 and an estimated $360 million on toys distributed with their meals in 2006, according to a 2008 Federal Trade Commission report.

"They're only really promoting it halfheartedly," said Schwartz of healthier food options. San Francisco's law "is making the restaurants practice what they preach."

The lure of such items is all too familiar to parents like Carmen Sanchez, who was at a San Francisco McDonald's on a recent evening and said she sometimes hears children beg for Happy Meals.

"If the babies don't get what they want, then they won't stop crying," Sanchez said.