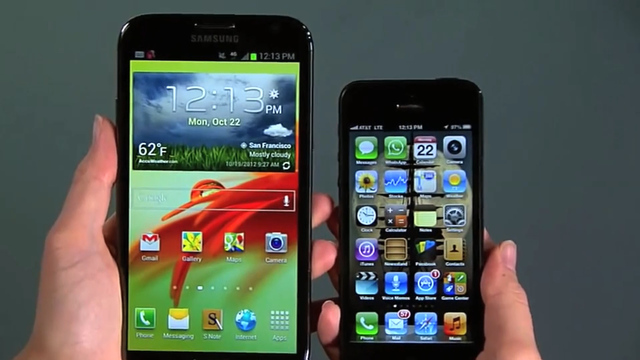 Adding a new twist in the Apple-Samsung legal battle, the South Korean tech giant rebuffed Apple's claims that it had committed patent theft. Instead, Samsung insisted it hadn't written any of the Android software on its smartphones and tablets -- Google did.

In the latest courtroom drama between Apple and Samsung, the lawyer for Samsung told jurors that Apple's gripe is with Android, a Google-developed smartphone operating system that now makes up about 70 percent of the global market.

Both companies accuse each other of stealing ideas from one another. The trial got underway this week at U.S. District Court in San Jose, Calif.

There are seven patents at issue in this latest case, and a lot of money at stake: $2 billion if Samsung loses; about $6 million if Apple loses.

Apple's lawyer, Harold McElhinny, anticipated that tactic, telling jurors that they shouldn't be misled by that.

McElhinny said that Samsung realized it "simply did not have a product that could compete successfully against the iPhone," citing internal Samsung documents. He also added that a Samsung memo stated the electronics company was suffering a "crisis of design" and was trying to figure out how to respond to Apple, CNET reported.

McElhinny added that an Apple expert will testify that 10 percent of people who bought a Samsung device would have brought an iPhone, if the Samsung device wasn't available. When Apple marketing chief Phil Schiller took the stand, he said that Samsung copying Apple's features had hurt the company, according to CNET.

"I believe it has caused damage for Apple in the marketplace. It has caused people to question some of the innovations we've created and Apple's role as the innovator," Schiller said. "That challenge is made harder in the copying."

As a result, Apple is demanding that Samsung pay an average of $33 for each of the reported 37 million Samsung devices running software allegedly conceived by Apple, and $40 per high-end device. The figure is well above past precedents, but Apple's legal team said it's fair compensation for the losses.

Samsung strongly disagreed. "I'll prove to you that is a gross, gross exaggeration, and an insult to your intelligence," Quinn told jurors.