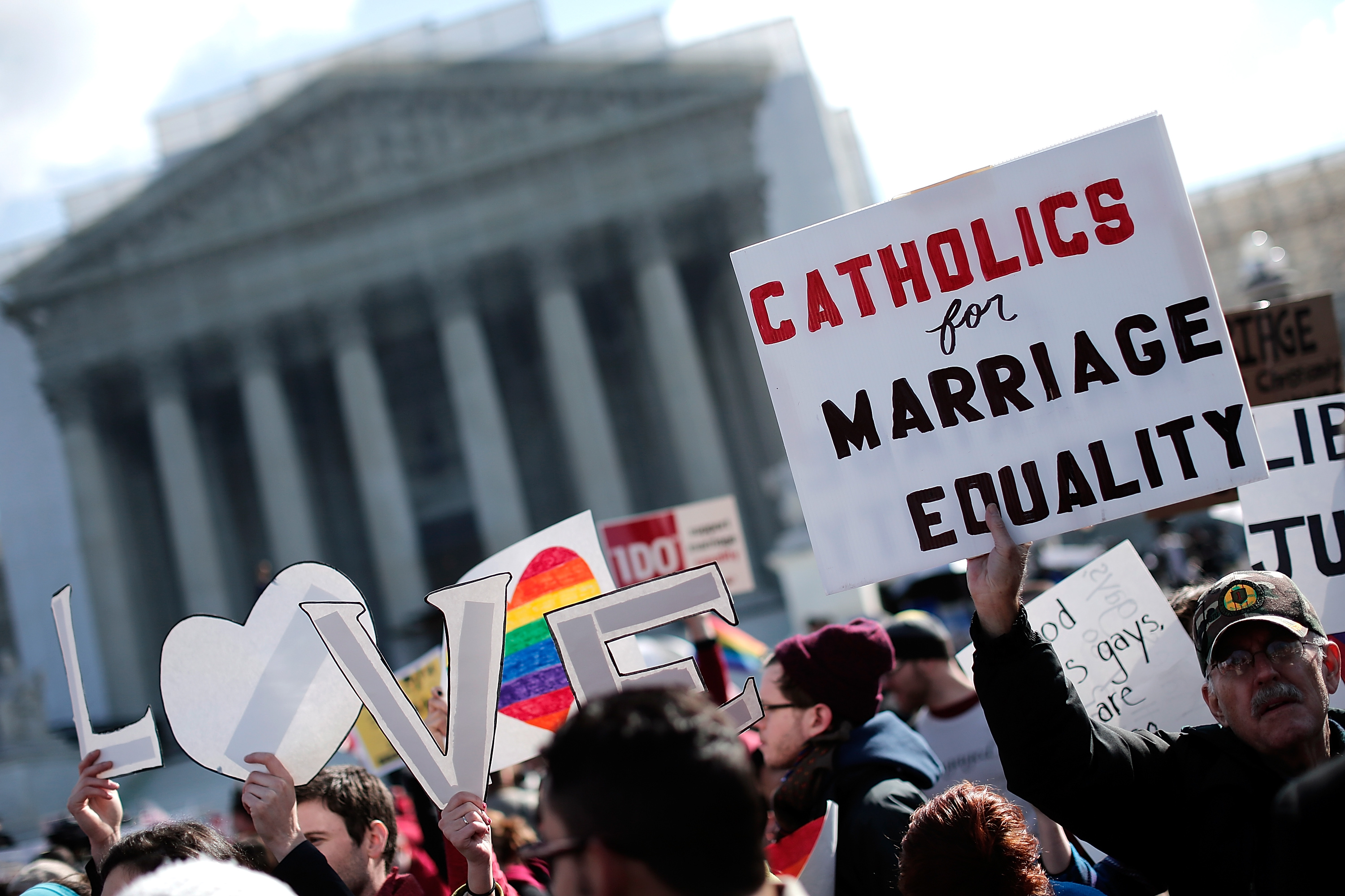 After the first day of Supreme Court deliberations over same-sex marriage, it's unclear exactly where the justices come down on the issue. It is clear, however, where public opinion is headed: A CBS News poll released this week provides the latest evidence that voters are increasingly accepting of same-sex marriages.

The tide of public opinion could arguably work in the favor of gay rights activists as they await decisions from the Supreme Court on two different cases relating to same-sex marriage. At the same time, the quickly changing public sentiment on gay rights goes to the heart of the conservative argument in both cases -- that the issue of marriage should be left up to voters and the legislative branches of government.

Charles Cooper, the attorney for Prop. 8's supporters, did not open his argument with any mention of protecting traditional marriage or its role in society -- rather, he began by urging the justices to protect the democratic process.

"The accepted truth...is one that is changing and changing rapidly in this country as people throughout the country engage in an earnest debate over whether the age-old definition of marriage should be changed to include same-sex couples," he said. "The question before this court is whether the Constitution puts a stop to that ongoing democratic debate and answers this question for all 50 States."

Today, the court hears arguments in United States v. Windsor, the case against a section of the Defense of Marriage Act (DOMA) that denies legally married same-sex couples federal benefits, such as Social Security benefits.

In its brief defending the law on behalf of House Republicans, the Bipartisan Leadership Advisory Group (BLAG) argues, "DOMA permitted states to perform their role as 'laboratories of democracy,' while at the same time ensuring that no one state's experiment would be imposed on other states or on the federal government. DOMA thus reflects an interest in ensuring that, at a time of unprecedented reconsideration of the traditional definition of marriage, each sovereign in our federal system may decide this important issue for itself."

Given the vigor of the ongoing debate over same-sex marriage, some gay rights activists were at first concerned taking California's Prop. 8 to the Supreme Court could backfire. "They were fearful it was too early, too soon and that an adverse decision on gay rights could set back the cause for years," explained UCLA School of Law professor Adam Winkler.

To a certain extent, the justices yesterday did seem to suggest it may be too early for a broad, national ruling on same-sex marriage.

"The one thing that the parties in this case seem to agree on is that marriage is very important," Justice Samuel Alito said. "It's thought to be a fundamental building block of society and its preservation essential for the preservation of society. Traditional marriage has been around for thousands of years. Same-sex marriage is very new... So there isn't a lot of data about its effect. And it may turn out to be a -- a good thing; it may turn out not to be a good thing, as the supporters of Proposition 8 apparently believe. But you want us to step in and render a decision based on an assessment of the effects of this institution which is newer than cell phones or the Internet?"

Justice Anthony Kennedy, who may be the swing vote in the Prop. 8 case, seemed to agree "there's substance to the point that sociological information is new."

The case for change

On the other hand, Kennedy seemed sympathetic to the fact that, in spite of existing same-sex marriage bans, same-sex couples are well accepted in places like California. They run households and start families just as opposite-sex couples do.

"There are some 40,000 children in California... that live with same-sex parents, and they want their parents to have full recognition and full status," Kennedy said. "The voice of those children is important in this case, don't you think?"

In the latest CBS News poll, one-fifth of Americans who have come around to supporting same-sex marriage said they changed their minds after getting to know someone who is gay. Personal connections to gays and lesbians are also prompting leaders and public officials -- like Sen. Rob Portman, R-Ohio, whose son is gay -- to come out in support of same-sex marriage. A number of other politicians including Sens. Mark Warner, D-Va.; and Claire McCaskill, D-Mo.; and former Secretary of State Hillary Clinton have also recently declared their support for same-sex marriage. Even President Obama came around on the issue just last year.

With same-sex marriage quickly gaining support among the public and political leaders, the Supreme Court justices may not want to be left behind.

"Justice Anthony Kennedy and Chief Justice John Roberts may be very concerned about how their votes contribute to their legacy," Winkler said. The relatively young Roberts may be on the court for another 25 years, Winkler noted. "He must know that by the time he resigns, gay rights will be much stronger than they are today. Does he want to be on the wrong side of history? His vote to uphold Obamacare may be a sign that he is cognizant of the judgment of history."

"Outside of the marriage context, can you think of any other rational basis, reason, for a state using sexual orientation as a factor in denying homosexuals benefits or imposing burdens on them?" she asked. "Is there any other rational decision-making that the government could make?"