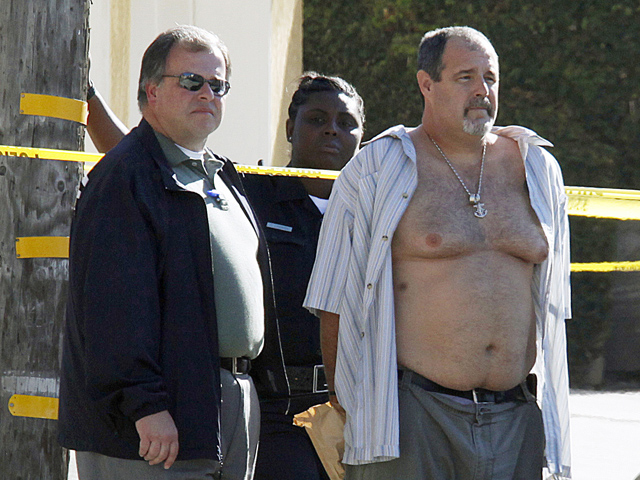 SEAL BEACH, Calif. - Scott Dekraai's neighbors considered him one of the friendliest guys on the block, a man who invited them over for pool parties and played catch with his son in his yard. Friends of his ex-wife, though, say she lived in fear of the man now accused of gunning down her and seven other people at the hair salon where she worked.

He suffered post-traumatic stress disorder from a 2007 tugboat accident that mangled his leg and left a colleague dead. His marriage to Michelle Fournier was falling apart even before that, and the court battle over their 7-year-old son was still raging Wednesday, when Dekraai is accused of spraying the Salon Meritage with gunfire.

Among those killed was Fournier, his ex-wife. The salon's popular owner, Randy Fannin, also died.

Fournier's boyfriend, Michael Warzybok, said that at a court hearing Tuesday a judge had pressed Dekraai to explain why he needed more time with his son than his current custody arrangement called for. Warzybok said a court-appointed psychologist had found the roughly 50-50 arrangement was working.

"All of a sudden, he didn't get his way," said Warzybok, who was interviewed by the psychologist along with Fournier's co-workers.

Dekraai had also asked Fournier to meet for coffee Wednesday, the day of the shootings, but she turned him down.

Fournier had indicated to friends and in court documents that she was afraid of her ex-husband. Her friend Sharyn White said that just weeks before the killings, she told her that Dekraai had stopped by the salon and threatened to kill her and others.

White, who is also Dekraai's step-aunt, said Fournier told her she took the threat seriously though others in the salon laughed it off. She said Fournier also had told her that when they were still married Dekraai had once held a gun to her head.

There is no sign that Fournier sought a restraining order against her ex-husband, though other friends agree she was afraid.

"As recently as a month ago, she told me how scared she was and I offered to hire her bodyguards," said Tim Terbush, a longtime friend. He said she turned him down because she feared that would only make Dekraai more angry.

Six women and two men were killed in the shooting in the quaint seaside town of Seal Beach, which had had only one homicide in the previous four years. A wounded woman was hospitalized in critical condition, although police Sgt. Steve Bowles said Thursday she was showing signs of improvement.

Police released the names of the dead Thursday evening, shortly before about 300 people gathered for a prayer service near the salon to honor their memory.

The Rev. Peggy Price of the Center for Spiritual Living, addressed the mourners.

The prayer service included time for residents to voice their thoughts and ended with people receiving roses as they exited the service. It was followed by a candlelight vigil.

Officers who arrived within minutes of reports of shots fired encountered a horrific scene, with bodies of victims scattered throughout the salon and a man bleeding in the parking lot outside.

Ron Sesler, working the lunch rush at his restaurant next door, said he thought the rapid "pop, pop, pop" he heard was a jackhammer until a terrified woman ran in screaming, "They're shooting people."

He said the man killed outside was a regular at the restaurant who just happened to park next to the gunman as he was running back to his truck.

"If he was late, the guy would have driven away. If he was early, he would have been in here," Sesler said.

Fournier's brother, Butch Fournier, said he saw footage of the salon on TV and immediately sensed the horror.

"The worst part about it was seeing the news and seeing the awning and knowing exactly what happened without even hearing a word," he said.

Police arrested Dekraai, 41, about a half-mile from the scene. He put up no resistance and was being held without bail Thursday.

Throughout Seal Beach and the nearby city of Huntington Beach, where Dekraai lived, his bitter custody battle with Fournier was common knowledge among friends of both.

"It was a very difficult battle," said Jo Cornhall, who lives across the street from Dekraai.

Still, neighbors were stunned that the friendly man who held pool parties in his backyard and doted on his son might be responsible for what police said was the worst tragedy in the city's 96-year history.

"I'm like, `No, not this neighbor, no way. He's the nicest guy ever,"' said Stephanie Malchow, who lives next door.

In court documents filed in February, Dekraai said he had 56 percent custody of his son and his ex-wife had 44 percent. He wanted the court to grant him "final decision making authority" when it came to matters involving their son's education and his medical and psychological treatment.

In court documents filed in May, Fournier described her ex-husband as "almost manic" when it came to controlling their son.

She said then that giving Dekraai such authority would be akin to "a situation where the inmates are running the asylum."

Fournier also alleged that Dekraai had called 911 at least once and "advised that he was going to kill himself or someone else."

Board-certified psychiatrist Ronald Silverstein told the court that he had diagnosed Dekraai, a former tugboat operator, with post-traumatic stress disorder that he determined was caused by the 2007 accident.

Dekraai had a successful maritime career until the injury.

He had the joined ferry boat company Catalina Express 20 years ago as a deckhand and worked his way up to captain of one of its boats, ferrying tourists to and from the picturesque island 26 miles off the coast. He left in 2000 to work on tugboats, company spokeswoman Elaine Vaughn said Thursday.

Dekraai said in court papers that he was unable to work after the accident. He said he received $5,157 a month as part of an insurance settlement, as well as $1,610 in retirement benefits.

Court records show a temporary restraining order was obtained by Dekraai's stepfather in 2007 after the man said Dekraai attacked him, leaving him with cuts and bruises on his face and right arm. The order, which Dekraai did not contest, also said his young son had witnessed the attack.

Dekraai said in court documents that his ex-wife had poor parenting skills and a drinking problem. She called him several times a day, Dekraai said, often screaming at him over the phone and in front of their son. He said she addressed him by an expletive instead of his name and made racist references to his current wife.

At the strip mall where the shooting occurred, people streamed by a memorial to pay their respects Thursday. Amid the flowers and candles someone had left a poem asking, "Where was God? Was he looking the other way?"

Susan Davenport choked up as she spoke of Fournier.

"She was a loving mom. She was a wonderful woman. She was kind. She was generous. She was all of those things," she said.

"Our community is devastated," she added. "We know all the people. We know the people in the salon and I know Scott."