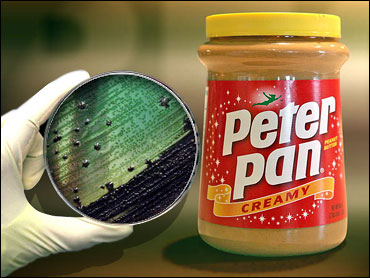 A salmonella outbreak that has slowly grown to nearly 300 cases in 39 states since August has been linked to tainted peanut butter, federal health officials said.

It is believed to be the first salmonella outbreak associated with peanut butter in U.S. history, said officials with the Centers for Disease Control and Prevention.

About 20 percent of the 288 infected people have been hospitalized, but none has died, said Dr. Mike Lynch, a CDC epidemiologist.

How salmonella got into peanut butter is still under investigation, Lynch said.

The brands pulled from the shelves are Peter Pan and Wal-Mart's Great Value peanut butter — both made by ConAgra — if the jar's product code began with serial number 2111, reports CBS News correspondent Mark Strassmann. Health inspectors traced the problem to a peanut butter factory in southern Georgia that has since been closed.

Great Value peanut butter made by other manufacturers is not affected, according to the Food and Drug Administration.

"Although none of our extensive product tests have indicated the presence of salmonella, we are taking this precautionary measure because consumer health and safety is out top priority," spokesman Chris Kircher said. "We are working closely with the FDA to better understand its concerns, and we will take whatever additional measures are needed to ensure the safety, quality and wholesomeness of our products."

The largest number of salmonella cases were reported in New York, Pennsylvania, Virginia, Tennessee and Missouri.

Symptoms of salmonella can include diarrhea, fever, dehydration, abdominal pain and vomiting.

The salmonella scare comes on the heels of two nationwide outbreaks last fall of the E. coli bacteria, linked to produce.

The new outbreak began in August, but just two or fewer cases have been reported each day, CDC officials said.

It was only in the past few days that investigators were able to hone in on a particular food, Lynch said.

ConAgra is destroying all affected products the company still has, the FDA said.

The company will cease production until the exact cause of contamination can be identified and eliminated. Meanwhile, ConAgra advised consumers to destroy any Peter Pan and Great Value brand peanut butter beginning with product code 2111.

The FDA sent investigators to ConAgra's processing plant in Sylvester where the products were made to review records, collect product samples and conduct tests for salmonella.

A recent CBS News poll found that only 15 percent of Americans have a great deal of confidence in the government's ability to protect from food-borne illness.

"There's no one in charge in the federal food safety system," Mike Taylor, a former USDA and FDA food safety official told Andrews.

Taylor says most food safety money — 80 percent — goes to the USDA, which visually inspects meat in slaughterhouses, while millions of Americans actually get sick from the invisible germs in produce.

During the past 10 years, Congress has been warned again and again that the food safety system is an organizational mess that does not fully protect consumers, reports Andrews.

But the spinach outbreak last year led to new calls for reform. One idea: Create a single food agency to finally put someone in charge.

Sen. Dick Durbin, the second-ranking Democrat in the Senate, says he thinks a single food agency would have traced the last outbreak more quickly. He says under one agency, money could be focused on disease prevention.