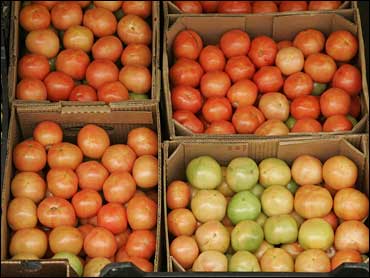 In the heart of Florida's tomato country, restaurant owners are worried.

"It's been paying bills every week, hoping you can pay them and not buying any extras," Cheryl Moore, owner of the Tomato Café in Havana, Fla., said.

And growers are fighting off their anger.

Said one grower: "I've got a sour taste in my mouth about it."

That's because nearly three months after the first case of salmonella, people are still getting sick. At the Tomato Café, Moore has been trying to reassure customers about her key ingredient for weeks. It's hard to reassure diners, she said.

"Sure, because you don't know if you're going to be the next case," Moore said. "You don't know where it's coming from."

The latest case was reported on June 20 - 12 days ago. And because a tomato's shelf life is about two weeks, it means the source of the outbreak is still out there. In fact, the FDA isn't even sure it's tomatoes. They're now looking at other produce often served with tomatoes.

They won't say what.

Today, the FDA tried to put the scare into perspective.

"It really is criminal that the FDA has not acted sooner to get regulations in place and mandatory tracking systems for these products," said Caroline Smith DeWaal of the Center for Science in the Public Interest.

Tomato grower Virgil Butler is still struggling to sell his crop. Sales of tomatoes in June were down 40 percent nationwide.

"Do you think the FDA failed in its mission?" Cobiella asked.

"Yes, I really do," Butler said. "And I don't think they know how to fix it. The damage has been done. How they gonna fix it now?"

Butler isn't waiting around to find out. After 30 years, he's getting out of the tomato business altogether. He's decided to grow grass instead.