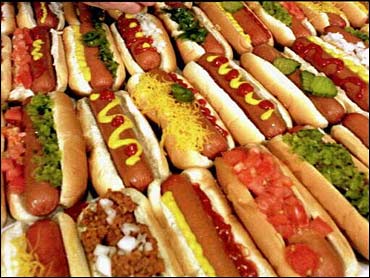 Months after a deadly outbreak of listeria, the Agriculture Department says it will require 2,500 companies that make hot dogs and deli meats to come up with plans for preventing the harmful bacteria from tainting their products.

Companies also must test areas such as walls, equipment and countertops and share the results with inspectors, said Elsa Murano, head of the department's food safety division.

"The rule is tough, it's fair, it's based on science," she said Wednesday.

Plants that don't comply could be shut down by inspectors, Murano said.

Under the regulations, companies will have flexibility in their prevention efforts. They are allowed to add germ-killing ingredients such as sodium lactate to the meat or to use a hot wash. Those that do both can tout it on their product label. Those that do only one procedure will face greater testing by government officials.

Federal inspectors will continue to randomly test plants for listeria.

The bug is difficult to control because it can appear in ready-to-eat meats after they are precooked at the plant. Consumers can prevent sickness by cooking the meat.

Companies aren't allowed to use irradiation to kill germs on such meats because the Food and Drug Administration has not approved it for those products. The technology, which involves using gamma rays or electricity to sanitize meat, is allowed on ground beef.

The Agriculture Department has been working on the listeria rule since 2001, when it first was proposed by the Clinton administration.

Consumer groups have criticized the department for taking so long to come up with the regulation, arguing that it could have sped up recalls of products linked to a listeriosis outbreak last fall. The outbreak sickened 53 people, killed eight and caused three miscarriages.

Murano said it took months to finish the rule because the agency was completing studies that would determine the best way to prevent listeria.

Advocates complained that the new regulations don't specify how often companies should test surfaces and products. They also said the rule should require companies to warn pregnant women and people with weak immune systems to reheat products before eating them.

"The weaknesses in the final rule mean that USDA risks having another hocus pocus food safety regulation that puts each company in charge of designing their own food safety systems without adequate government oversight," said Caroline Smith DeWaal, head of food safety at the Center for Science in the Public Interest.

The meat industry said it was pleased the rule allows companies to use technology or ingredients to prevent contamination.

"We hope that this regulatory approach, coupled with the scientific strategies employed by meat and poultry companies, will help us achieve our mutual goal: producing ready-to-eat meat and poultry products that consumers can enjoy with confidence," said J. Patrick Boyle, president of the American Meat Institute.

Because it's an interim rule, the industry and public can comment on the rule and the government can make changes over the next 18 months. However, it is slated to go into effect in September.