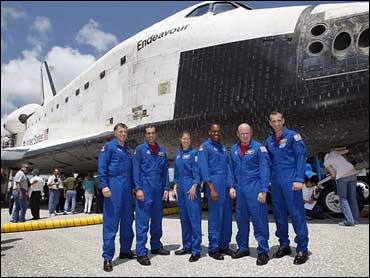 Space shuttle Endeavour returned to Earth safely Tuesday, ending a nearly two-week orbital drama that centered on a deep gouge in the shuttle's belly and an early homecoming prompted by a hurricane.

The gouge looks only slightly worse than it did in orbit, said Bill Gerstenmaier, NASA's space operations chief. The exposed felt material, the last barrier before the shuttle's aluminum frame, did not char, he said.

"The teams will pop these tiles off, we'll take a look at the underlying material to make sure that there's no damage, there's nothing going on," "Gerstenmaier said

The 3½-inch-long gouge to Endeavour's protective tiles caused by falling debris during liftoff was the main concern for much of Endeavour's mission.

The shuttle swooped out of the partly cloudy sky and touched down on the runway at 12:32 p.m. as the astronauts' families cheered.

NASA officials quickly gathered under Endeavour, still parked on the runway, pointing and gazing up at the gouged tiles. At the same time, cameras focused on the damage, offering detailed close-up views.

Six of the seven astronauts climbed out and inspected their ship, but Morgan did not emerge from the crew transport vehicle.

Morgan, still wobbly from the effects of gravity, was unable to stand and walk outside in the heat. NASA Administrator Michael Griffin reported she was doing fine, but feeling "just a little bit under the weather."

Over the past few days and right up until landing, NASA had stressed that the in Endeavour's belly would not endanger the shuttle during its landing, but it did not want the shuttle to suffer any structural damage that might require lengthy repairs.

Repairing the damage involved a lot of unknowns. "They've never done anything like that," reports CBS News Space Consultant Bill Harwood. "The risk was greater than simply returning as is."

There was zero chance of a Columbia-style disaster this time, NASA managers insisted, although they acknowledged re-entry was always risky. In 2003, a chunk of fly-away foam had damaged the shuttle Columbia's wing, allowing hot gases to seep in during the re-entry and tear the shuttle apart.

The much smaller damaged area on Endeavour was also subjected to 2,000-degree temperatures during the hottest part of atmospheric re-entry, but engineers were convinced after a week of thermal analyses and tests that the spacecraft would hold up.

With its pilots reporting no problems, Endeavour zoomed over the South Pacific, crossed Central America and Cuba, then headed up the Florida peninsula into Kennedy Space Center. Its trip spanned 13 days and 5.3 million miles.

The shuttle wasn't supposed to return until Wednesday, but mission managers decided to cut its space station visit short because of Hurricane Dean. At the time, NASA was uncertain if Dean would veer toward Texas and threaten Houston, home to Mission Control. Even though forecasters later put Houston out of harm's way, NASA held to a Tuesday landing.

A half hour after landing, Mission Control jokingly asked commander Scott Kelly if he wanted to turn the shuttle around and "set up for another quick one."

"Give us the weekend off and maybe next Monday," Kelly replied.

During Endeavour's liftoff on Aug. 8, a piece of foam insulation or ice had broken off a bracket on the external fuel tank, fell onto a strut lower on the tank and then bounced into the shuttle, gashing its tiles.

The astronauts inspected the especially vulnerable areas Sunday, after undocking from the international space station. NASA on Monday cleared Endeavour for landing after engineers finished evaluating the latest laser images of the shuttle's wings and nose and concluded there were no holes or cracks from micrometeorites or space junk.

Brackets have shed debris in launches since Columbia, but it wasn't until Endeavour's flight that such debris caused noticeable damage again. NASA is considering possible modifications to the brackets and will decide what, if anything, should be done before the next shuttle launch, targeted for late October.

Gerstenmaier noted that each fuel tank is covered with 4,000 pounds of foam while each bracket only has ounces on it.

"We've really taken this huge complex problem ... and we've really shrunk it down to just very, very few areas, essentially ounce-size pieces of foam that we need to go work with," he said.

While in orbit, the astronauts attached a new truss segment to the space station and replaced a failed gyroscope needed for keeping the outpost headed in the right direction. They also delivered 5,000 pounds of supplies.

The crew completed four spacewalks, two of which were cut short. One was halted after a spacewalking astronaut noticed a cut in his glove. The other was abbreviated to give the crew enough time to prepare for an early departure from the space station.

Among those pacing and holding their breath during the landing was June Scobee Rodgers, the widow of Challenger's commander. She watched the landing on TV at her home in Tennessee, through tears of joy and relief.

"I am so proud and happy for the entire crew, but especially for Barbara. We love her," Scobee Rodgers said.