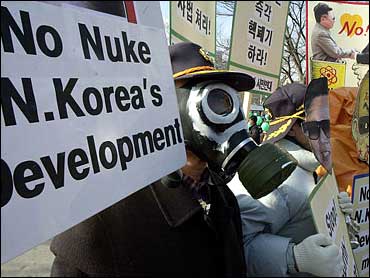 Thousands of South Koreans staged a pro-U.S. rally Sunday, prayed for North Korea to give up its nuclear ambitions and an envoy of South Korea's president-elect urged Washington to hold direct talks with the communist nation.

Returning from a visit to Washington and Tokyo, President-elect Roh Moo-hyun's envoy said he had made the case for dialogue.

President Bush believes the standoff can be resolved peacefully, but said Friday that "all options are on the table," suggesting that Washington would consider military action.

Relations between the United States and North Korea deteriorated in October, when U.S. officials said North Korea had admitted developing nuclear weapons in violation of a 1994 agreement. The United States then backed out of its part of the bargain, cancelling fuel oil shipments.

"North Korea must stop nuclear development," said a statement by the National Council of Churches in Korea, which organized the rally.

But there is little sign of an end to the standoff after the North suggested it reactivated nuclear facilities that U.S. officials say could produce weapons within months.

North Korea accuses the United States of inciting the current nuclear tension as a pretext to invade the communist county, and has warned that a "total war" could break out to devastate both Koreas.

Secretary of Defense Donald H. Rumsfeld said in Munich, Germany, that most intelligence services know the North Koreans have "one or two nuclear weapons," and that by May or June "they may have enough nuclear material to make an additional six to eight nuclear weapons."

Sunday's demonstration was in contrast to the wave of anti-U.S. protests in South Korea late last year over the road deaths of two South Korean girls hit by a U.S. military vehicle.

North Korean media have urged the South Koreans to support the North in a joint struggle against the United States in an apparent attempt to drive a wedge between Seoul and its key ally, Washington.

"Once the U.S. imperialists unleash a new war on the Korean Peninsula, it will soon develop into a nuclear war and both the North and the South of Korea will suffer from it," North Korea's official newspaper Minju Joson said Sunday.

Despite the crisis, Seoul wants to expand inter-Korean exchanges. On Sunday, the two Koreas exchanged the names of long separated family members who are available for temporary reunions on Feb. 20-25. The two Koreas have held five reunions since a historic inter-Korean summit in 2000.

Millions of Koreans remain separated by a tightly sealed border after the peninsula's division in 1945 and the 1950-53 Korean War, for which there still is no peace treaty.