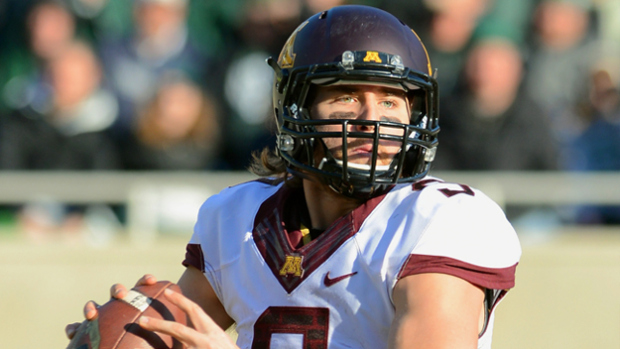 A police statement said officers came across the injured man, Isaac Dallas Kolstad, 24, of Mankato, while patrolling Mankato's downtown entertainment district around 2 a.m. The 20-year-old Nelson was arrested at the scene and taken to the Blue Earth County jail, the statement said. He is reportedly being held on possible charges of third-degree assault.

Nelson left the Minnesota Gophers in January to transfer to Rutgers, which is moving into the Big Ten next season.

"We are in the process of gathering information on the situation and reserve comment until the legal process is complete," Rutgers athletics spokesman Jason Baum said in a statement.

Nelson was going to sit out the 2014 season and then would have had two seasons of eligibility left. Nelson was a star at Mankato West High School, where he was named Minnesota's Mr. Football and the Associated Press Player of the Year in 2011, according to the station.

Kolstad, who previously played football for North Dakota State and then Minnesota State, recently graduated and was out Saturday night celebrating with friends, his father said, according to CBS Minnesota. Following the altercation, the 24-year-old was taken to Mayo Clinic Health System in Mankato, where he remains in critical condition, according to the station.

"We are extremely grateful for the outpouring of support we have received during this difficult time," Kolstad's family said in a statement. "Isaac is a very strong and determined young man, who is dearly loved by his family and friends. We would respectfully ask for your continued prayers."

Police say they are looking for a second suspect involved in the assault, reports the station. Anyone with information in regards to the incident is asked to notify police.

"It's an ongoing investigation and as more information becomes available we'll be releasing it," city spokeswoman Shelly Schulz said.