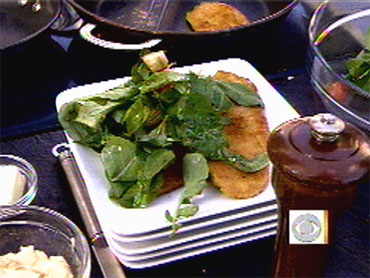 The old adage says, "When in Rome, do as the Romans do."

And Matthew Accarrino did - as a young apprentice chef in Italy, visiting local farms for the freshest local ingredients every day.

That's been an Accarrino guiding principle ever since.

He brought his love of rustic cuisine to the finest restaurants in America, such as several critically-acclaimed eateries in New York and now, SPQR in San Francisco, where he's executive chef.

Matthew headed back to New York after accepting "The Early Show on Saturday Morning"'s "Chef on a Shoestring" challenge of making a delicious, three-course Italian-inspired meal for four on our meager $40 budget.

And his chef's hat was automatically tossed into our "How Low Can You Go?" competition.

The "Shoestring" chef whose ingredients cost least will be invited back to prepare our year-end holiday feast!

Split Peas: Also known as field peas, a variety of yellow or green pea grown specifically for drying. These peas are dried and usually split along a natural seam. Whole and split dried field peas are available packaged in supermarkets and in bulk in health-food stores. Field peas do not usually require presoaking before cooking. Source: Epicurious.com

Ham Hock: The hock is the lower portion of a hog's hind leg, made up of meat, fat, bone, gristle and connective tissue. In the market, ham hocks are often cut into 2- to 3-inch lengths. Most have been cured, smoked or both, but fresh hocks can sometimes also be found. Ham hocks are generally used to flavor dishes such as soups, beans and stews that require lengthy, slow cooking. Source: Epicurious.com

Milanese: A term meaning "in the style of Milan," referring to food (usually meat) dipped in beaten egg, then into a bread crumb-Parmesan mixture and fried in butter. Source: Epicurious.com

Wash the peas and drain. In a large sauce pan over medium-high heat, heat one tablespoon of olive oil and sweat onion, carrot, celery and garlic with a pinch of salt until transparent. Add the peas, bay leaf, ham hock and water. Bring to a simmer and season with salt and pepper. Cover and cook until peas are tender, about one hour.

Meanwhile, preheat oven to 350ºF. Toss bread in a bowl with olive oil to coat and season with salt and pepper. Spread bread onto sheet trays in one layer and bake until golden brown. Remove from oven and let cool.

When the peas are tender, remove from heat. Remove ham hock and bay leaf. Discard bay leaf. Reserve meat and dice into quarter-inch cubes. Puree soup in a blender and emulsify in olive oil if desired. Return pureed soup to a clean pot over medium heat and season with salt and pepper to taste. Reheat and serve the hot soup garnished with diced ham hock, croutons and a drizzle of olive oil.

For more of Matthew's recipes, go to Page 2.

Set up an assembly line of eggs, flour and breadcrumbs in separate dishes.

Taking one chicken cutlet at a time, dip meat in flour to coat, pat to remove excess flour. Next, dip meat in beaten eggs, let excess egg drip off. Finally, dip in seasoned bread crumbs to coat on all sides.

Heat 1/4 cup olive oil in a large sauce pan over medium-high heat. When the oil moves quickly across the pan, add as many cutlets to fit pan, without crowding. Cook cutlets, flipping once, until golden-brown on both sides. Repeat until all cutlets are fried, season with salt, keep warm.

To make salad dressing, combine 1/2 cup extra-virgin olive oil with 1/2 cup of vinegar. Combine arugula, tomatoes and cucumber and drizzle with as much dressing as desired, season with salt and pepper. Squeeze fresh lemon juice on cutlets and serve green salad on top.

Pour mixture into prepared loaf pan and bake until golden-brown and a knife poked through middle of the loaf comes out clean.

Meanwhile, beat cream in a mixer with one tablespoon of sugar until soft peeks form. Serve a dollop of whipped cream with bread.


So, how did Matthew do in our "How Low Can You Go?" competition?

That earned Matthew a spot on our Leaders Board!: