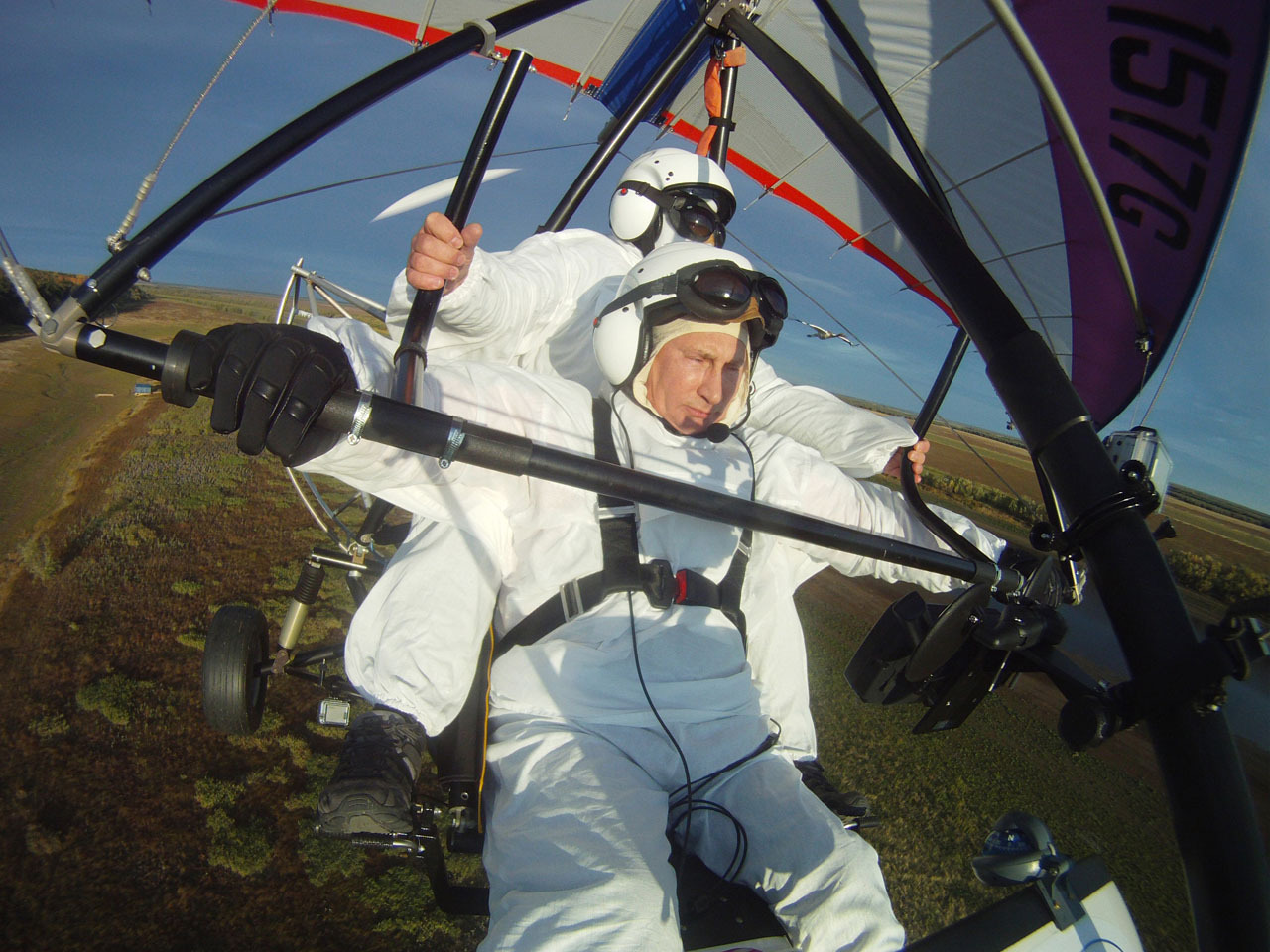 Dressed in a white costume meant to imitate an adult crane, Putin took part in a project to teach the endangered birds who were raised in captivity to follow the aircraft on their migration to Central Asia.

RIA-Novosti news agency reported that only one crane followed Putin on his first flight, which he attributed to high winds that caused the hang glider to travel faster than usual. On the second flight, five birds followed Putin, but after a few circles only two had stuck with him for the full 15-minute flight.

Putin stopped off at the Kushavet ornithological research station en route to an international summit in Vladivostok; once at the station, he took the hang glider flight.

Click for a Russian news video of Putin flying with cranes

The flight, given many minutes of airtime on Russian television, provoked an array of contemptuous jokes on the Internet, one of the most popular being "So Putin is off to wintering with cranes. Does this mean he's not going to be back before spring?"

Putin has become alternately notorious and beloved for an array of adventurous stunts, including posing with a tiger cub and riding a horse bare-chested.

Some of the stunts, such as petting a polar bear tranquilized in the wild, have purported scientific connections. But Putin last year was caught short when one of the events was revealed to be a set-up.

In that case, Putin was shown scuba diving and bringing up fragments of ancient Greek amphorae. But his spokesman Dmitry Peskov later admitted the artifacts had been planted on the sea floor for Putin to grab.

The stunts irritate Putin's opponents, who regard them not as benign political entertainment but as part of an establishment of a cult of personality lionizing an authoritarian leader.

Marat Guelman, one of Russia's most well-known art gallery operators, wrote in a blog on the Echo Mosky radio station website that the flight shows Putin "has lost faith in us. He sees our treachery, greed, cowardice and cruelty. There's nothing to love in us anymore. Dolphins, cranes, horses — that's a different thing."

Masha Gessen, author of a book critical of Putin, left her post as editor of the travel and science magazine Vokrug Sveta (Around the World) this week, claiming she was fired for refusing to send a reporter 3,500 kilometers (2,200 miles) northwest of Moscow to Yamal Peninsula to cover Putin's flight with the cranes.

A statement from the magazine Tuesday said she left by agreement with management because of "differences" on the separation of editorial and publishing powers.

Vokrug Sveta works closely with the Russian Geographical Society, whose board of trustees is chaired by Putin.