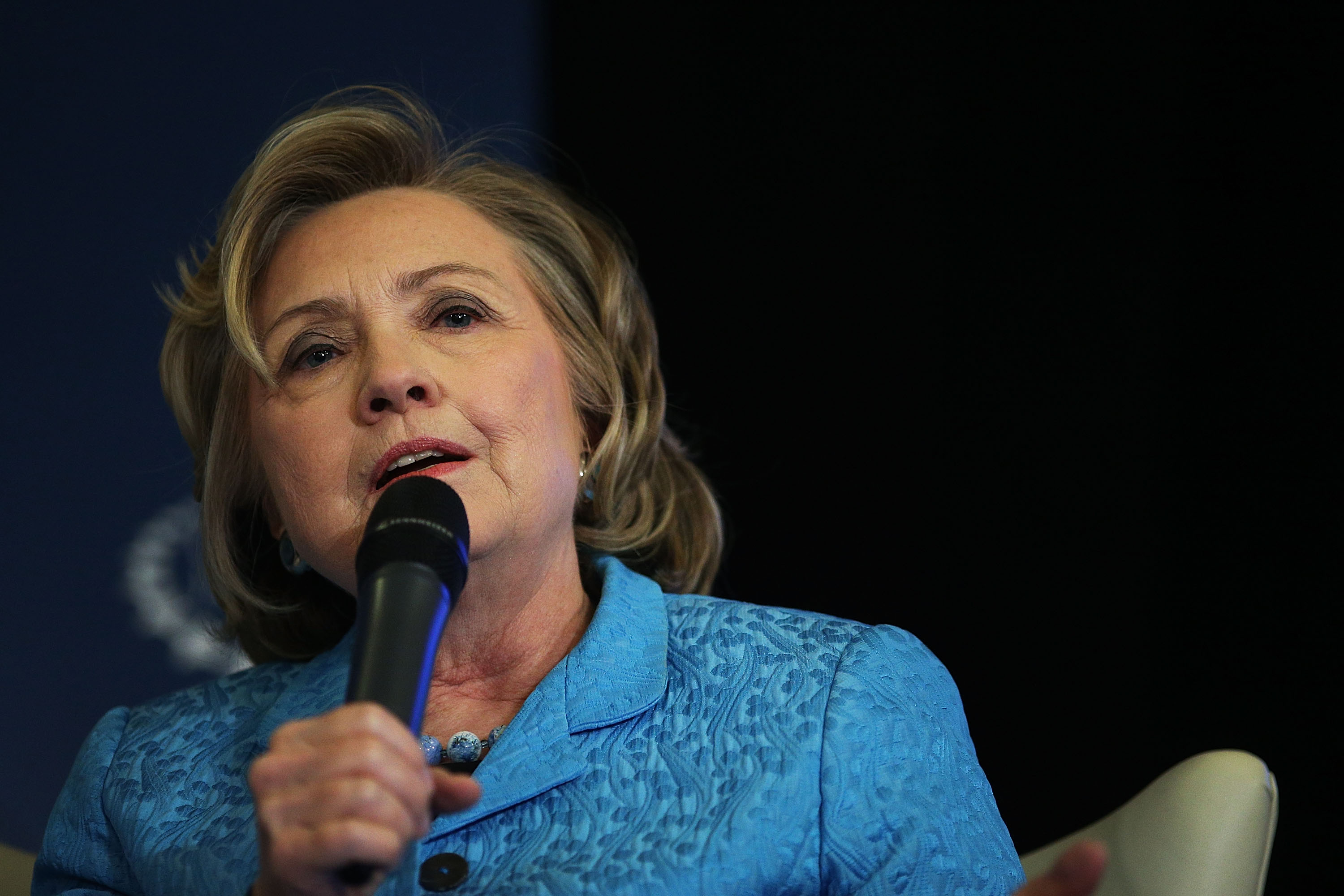 STORRS, Conn. -- Hillary Rodham Clinton said Wednesday she believes the outcome of the standoff in Ukraine will be a bad one for Russia.

Speaking at a University of Connecticut issues forum, the former first lady, U.S. senator and secretary of state said she believes the sanctions against the Russian government must be "tightened and widened" to prevent the crisis from escalating.

"I think Russia will pay a big price for this," Clinton said. "But that is an endpoint that we've got to get to as peacefully as possible without seeing the total disintegration of Ukraine as a country with territorial integrity and opportunity to have the relationship it wants with the West."

Clinton, who is considering a run for president in 2016, said she believes Russian President Vladimir Putin would like to see a return of a Russian era that no longer exists and said the U.S. and Europe need to be "very clear, strong and to some extent patient" to make that outcome unaffordable to him.

"I think the outcome for him and Russia will not be good, which is deeply unfortunate," she said. "Russia should be a much more dynamic and much more successful country and could be if Putin weren't trying to turn the clock back to the Soviet Union days."

Also on Wednesday, new signs emerged that Congress might heed Clinton's advice and strengthen the penalties levied against Russia to prevent any further aggression. Sen. Bob Corker, R-Tenn., the top Republican on the Senate Foreign Relations Committee, called for sanctions to be widened and strengthened during a trip to Ukraine.

"The greatest immediate threat to the people of Ukraine realizing a better future is the external threat of Russia," Corker said, according to the Washington Examiner. "When I return to Washington, I will continue urging the Obama administration to push back on Russia in a much more forceful way by imposing sanctions against portions of the banking and energy sectors ... to deter further Russia aggression."

He urged the administration to expand the sanctions to include Gazprom, a giant energy company under the control of the Russian government.

During Clinton's speech, which was delivered before a group of about 2,300 students, faculty and staff and was not open to the public, she also praised young people's activism and community service, and she called on UConn students be part of what she called the "participation generation."

She was then asked questions submitted in advance and spoke on issues ranging from congressional gridlock to immigration reform.

She urged the students not to vote for any leader who does not believe in compromise. But she did not say whether she would be a candidate for president.

Clinton also had little to say about her political future earlier in the day at a women's leadership conference in Boston. But she offered a strong message to a largely female audience estimated at 3,500.

"There are times in all of our lives when we're either given an opportunity or we see one that we could seize. And we get nervous. We worry. We're not ready to dare anything. But I hope you will," she said at the Simmons Leadership Conference set along the Boston waterfront. "Women have to dare to compete."

It's a familiar refrain from Clinton, who has focused on gender equality, among other issues, in a series of public appearances since leaving the Obama administration last year.

In a speech and subsequent question-and-answer session, Clinton thanked the thousands of runners who competed in the Boston Marathon earlier in the week for sending "a message of hope, resilience and determination one year after the vicious attack." Three people died and hundreds were injured in twin bombings near the finish line of last year's marathon.

Clinton also drew on her experience as secretary of state, listing her biggest regret as the deadly 2012 attack on a U.S. diplomatic compound in Benghazi, Libya, that killed four Americans. She called it "a terrible, senseless, terrorist action."

Clinton's proximity to New Hampshire, which traditionally hosts the country's first presidential primaries, was as noteworthy as her remarks.

While potential Republican presidential candidates have begun aggressively courting New Hampshire voters in recent weeks, Clinton has avoided the state altogether since the 2012 elections. Despite her absence, the vast majority of New Hampshire's top Democrats have lined up behind Clinton, the overwhelming Democratic front-runner should she run.

She has said she will make a decision about the 2016 presidential contest by the end of the year.

Massachusetts doesn't have the same political significance as New Hampshire, but Massachusetts activists make up a significant portion of the volunteer armies needed for get-out-the-vote efforts when the New Hampshire primary season begins in earnest.