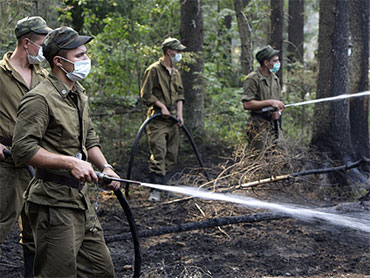 At least six wildfires were spotted in the Bryansk region this week - the part of Russia that suffered the most from the Chernobyl catastrophe in what was then Soviet Ukraine - and fire crews quickly extinguished all of them, Emergency Situations Ministry spokeswoman Irina Yegorushkina said. Her agency also had reported sporadic wildfires last week, saying all had been put out.

Hundreds of soldiers dug a trench over the weekend around the Sarov nuclear base, one of Russia's primary nuclear weapons facilities, as a precaution against advancing fires. Officials said Sunday that the situation was "stabilized," according to a report in The Guardian. Russia's first atomic bomb was built at Sarov in 1949.

On Tuesday, the operator of Russia's nuclear waste facilities said the 17 locations under his charge were safe from the wildfires, according to China's Xinhua news agency. Andrei Chizhov, head of safety for RosRao, said one of the waste management company's 17 plants was just four miles from a fire, but that the operator, "adopts all necessary preventive measures" to ensure their safety under such circumstances.

Radiation experts from Moscow conducted a thorough check of the Bryansk area, which borders Belarus and Ukraine, and concluded there has been no increase in radiation levels, she said.

Large forested areas in Bryansk were contaminated when the Chernobyl nuclear power plant's Reactor No. 4 exploded during a pre-dawn test on April 26, 1986, spewing radioactive clouds over much of the western Soviet Union and northern Europe.

Radioactive particles settled into the soil, and environmentalists have warned that they could be thrown up into the air once again by wildfires and blown into other areas by the wind.

Russia's Emergency Situations Minister Sergei Shoigu acknowledged the danger last week, and his department says they are taking all precautions.

"We had several fires, but the situation here is not as difficult as in the areas around Moscow," Yegorushkina told The Associated Press on Wednesday.

The chief of the Bryansk forest protection service said his agency had increased patrols around the forests, particularly in the southwest section affected by Chernobyl.

"There is a danger, but we are controlling the situation," agency chief Vladimir Rozinkevich told the AP.

Vasily Tuzov, a deputy head of the federal forest protection service, said wildfires engulfed a total of some 9,600 acres in several regions of Russia hit by the Chernobyl fallout, including the Bryansk region, but most of them have been put out.

He said it wasn't immediately clear whether any of the fires had spread any radioactive particles into previously unpolluted areas.

"Our workers will need to conduct measurements to determine that," Tuzov told the AP. "All we know now is that there have been fires in the areas with higher radiation levels."

Greenpeace and other environmental groups say radioactive dust from the Chernobyl disaster could be harmful even though doses will likely be small.

A top Russian forest expert said that the mixture of radioactive elements that remained in the forest floor in the affected regions remains dangerous.

"A cloud may come up with soot and spread over a huge territory," said Alexander Isayev of the Moscow-based Center for Forest Ecology and Productivity.

In Vienna, the International Atomic Energy Agency said it had no comment on the radioactive dangers posed by the wildfires.

Hundreds of wildfires sparked by the hottest summer ever recorded in Russia have engulfed large areas around Moscow and other parts of western Russia, cloaking the Russian capital in suffocating smog for a week. The normal death rate in Moscow has doubled to 700 people a day, morgues are overflowing and residents are desperately seeking ways to counter soaring temperatures and acrid smoke.

About 165,000 workers and 39 firefighting aircraft were battling more than 600 blazes nationwide Wednesday over 220,000 acres, the Emergency Ministry said.