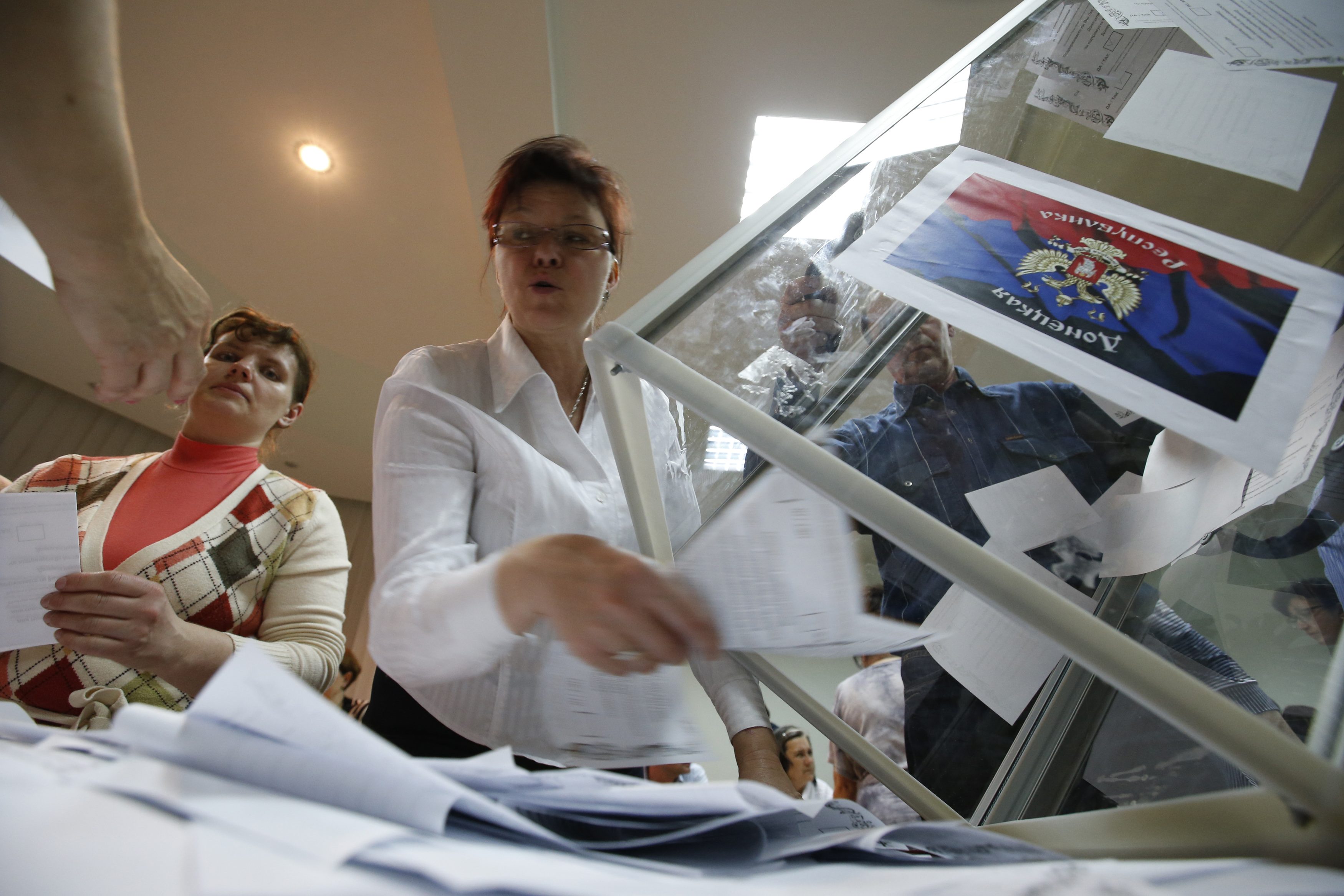 DONETSK, Ukraine -- Pro-Russian insurgents in Ukraine's Donetsk region declared independence Monday and asked to join Russia - a day after holding a hastily arranged vote on separatism that Ukraine's interim government and the West have declared a sham.

Organizers said about 90 percent of those who cast ballots Sunday in Donetsk and the neighboring Luhansk region backed sovereignty for the sprawling areas that lie along Russia's border and form Ukraine's industrial heartland.

The Kremlin on Monday took a cautious line to the referendum, saing Ukraine's government should engage in a dialogue with the eastern parts of the country.

The Russian government voiced its hope in a statement that "the practical implementation of the referendums results will take place in a civilized way," without violence.

It added that the Organization for Security and Cooperation in Europe could help organize a dialogue between Ukraine's government and representatives of the east.

Speaking separately Monday in Moscow, Russian Foreign Minister Sergey Lavrov said no further international talks on the Ukraine crisis could take place unless and until the government in Kiev entered into a direct dialogue with the separatists in the east. Lavrov also reiterated Moscow's "respect" for the results of the referendums in the two eastern Ukrainian provinces.

The Kremlin statement, however, appeared to signal that Russia has no intentions at present to annex the Donetsk and Luhansk provinces, like it annexed Crimea following a similar referendum in March. It also noted the "high turnout" in the vote and condemned the use of force against civilians in the east.

Ukraine's central government and the West have condemned the balloting as a sham and a violation of international law, and accused Moscow of fomenting the unrest in a possible attempt to grab more land weeks after the annexation of Crimea.

"The farce, which terrorists call the referendum, will have no legal consequences except the criminal responsibility for its organizers," Ukraine's acting President Oleksandr Turchynov said in a statement Monday.

The pro-Russian insurgents, who organized Sunday's balloting, said the ultimate status of the regions would be discussed later and could include the possibility of secession or annexation by Russia or remaining part of Ukraine.

Election organizers said turnout topped 70 percent by late afternoon, but with no international election monitors in place, it was all but impossible to confirm such claims. Turnout was brisk at some polling stations visited by AP journalists. At one polling station at a school in Donetsk, all voting slips that could be seen in the transparent ballot boxes showed that self-rule had been selected.

CBS News correspondent Clarissa Ward reported from Donetsk that there were glaring irregularities with the vote, which did not come anywhere near international standards. Booths out in the open, people openly voting twice, and other irregularities raised serious questions about the legitimacy of the operation.

Ward said a significant proportion of the population in the region doesn't support the separatist movement, but they remain a silent group as they boycotted Sunday's referendum.

There were no immediate signs of any outright intimidation by pro-Russian forces Sunday, and insurgents near the polls were not wearing their usual balaclavas.

A few days before the vote, Putin had urged the organizers to postpone the balloting in an apparent attempt to distance himself from the insurgents and keep his hands free for bargaining with the United States and the European Union on defusing the worst Russia-West crisis since the Cold War.

His spokesman, Dmitry Peskov, was quoted by the Kommersant daily Monday as saying that it was difficult for people in the east to heed Putin's call because of fighting in the region.

The insurgents in the east have seized government buildings and clashed with government troops and police over the past month. More than 30 people have been reported killed since Ukrainian forces began trying to retake some eastern cities from the insurgents.

Sunday's voting in the two regions with a combined population of 6.5 million appeared mostly peaceful, but armed men opened fire on a crowd outside the town hall in Krasnoarmeisk.

The men identified themselves to a crowd as Ukrainian national guards but the Interior Ministry has denied they were part of the national guard.

An Associated Press photographer who witnessed the shooting saw two people lay motionless on the ground. The Interfax news agency later reported that one man died on the spot and another later died of wounds at a hospital.

The violence in Krasnoarmeisk, about 20 miles west from the regional capital, Donetsk, came hours after armed men, one of whom said they were from the national guard, put a stop to the voting and took control of the town hall. In the evening, more armed men arrived in a van, a scuffle broke out with people gathered around the building and the men fired the shots.

Over the past few weeks, the Ukrainian government and the West have accused Russia of trying to destabilize the country or create a pretext for another invasion. Russia - which annexed Ukraine's Crimean Peninsula just days after voters there approved secession in a March referendum - has rejected the accusations.

Turchynov and Ukraine's caretaker government came to power in February following the ouster of Kremlin-friendly President Viktor Yanukovych after months of protests in Kiev. Moscow and many in Ukraine's east have accused the new government of intending to trample the rights of eastern Ukraine's Russian-speakers.