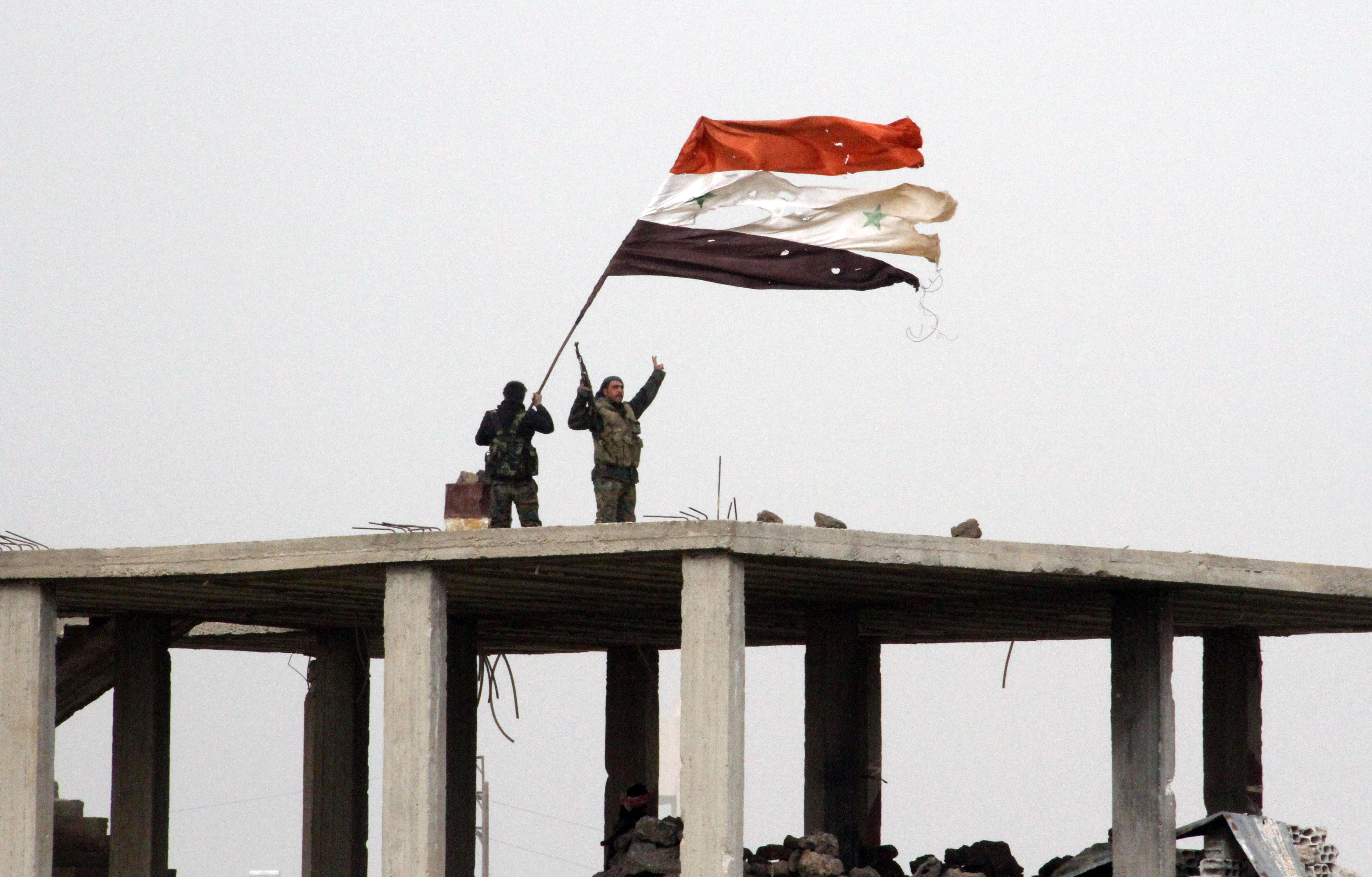 BEIRUT The U.S. military said it may have unintentionally struck Syrian troops while carrying out a raid against the Islamic State of Iraq and Syria (ISIS) on Saturday, threatening an already fragile U.S. and Russian-brokered cease-fire that has largely held despite dozens of alleged violations on both sides.

U.S. Central Command said the strike was immediately halted “when coalition officials were informed by Russian officials that it was possible the personnel and vehicles targeted were part of the Syrian military.”

The Syrian military said the deadly airstrike hit a base in the eastern city of Dayr az Zawr that is surrounded by ISIS, allowing the extremists to advance and overrun Syrian army positions in the area. Russia’s military said it was told by the Syrian army that at least 62 soldiers were killed in the air raid and more than 100 wounded.

The apparently errant strike could deal a crushing blow to the fragile cease-fire​ that has largely held for five days despite dozens of alleged violations on both sides. The cease-fire, which does not apply to attacks on ISIS, has already been the subject of disputes between Moscow and Washington, with each accusing the other of failing to fully implement it.

The Syrian military said the airstrikes enabled an ISIS advance on a hill overlooking the air base. It called the strike a “serious and blatant attack on Syria and its military,” and “firm proof of the U.S. support of Daesh,” using the Arabic acronym for ISIS.

A Syrian military spokesman  told a briefing early Sunday that the U.S. airstrike destroyed three tanks, three infantry fighting vehicles, four mortars and an anti-aircraft gun,  Russia’s TASS news agency reported. The unnamed spokesman said the ISIS advance on the base was stopped after Russian warplanes were called in to hit ISIS positions.

Russia called for an emergency session of the U.N. Security Council and demanded “full and detailed explanations about whether this was deliberate support of the Islamic State or another mistake.”

With some of the worst bickering since the Cold War, the U.S. and Russian Ambassadors traded barbs at the Security Council session Saturday night, CBS News’ Falk reported.

U.S. Ambassador Samantha Power called the convening of the Council a “stunt” that is “uniquely cynical and hypocritical” for Russia to call the emergency meeting, while never taking similar action to condemn Assad’s regime “for some of the most systematic atrocities we have seen in a generation.”

Russian Ambassador Vitaly Churkin, meanwhile, called the strike “a reckless operation” and questioned U.S. motives, saying he does not know where the negotiations - and the U.S.-Russian ceasefire -  will go next.

Churkin added, “In all my years at the U.N. … I’ve never seen such an extraordinary display of American heavy handedness as today,” adding that the humanitarian convoy to eastern Aleppo was supposed to leave on Sunday morning.

“It may well be, one has to conclude, that the airstrike has been conducted in order to disrupt the operation of the joint implementation group,” Churkin said.

Russian Foreign Ministry Spokeswoman Maria Zakharova was quoted by the state news agency TASS as saying that “after today’s attack on the Syrian army, we come to the terrible conclusion that the White House is defending the Islamic State.”

A senior Obama administration official said the United States has “relayed our regret” for the unintentional loss of life of Syrian forces fighting the ISIS.

A Russian Defense Ministry official said Syria has informed them that 62 of its soldiers were killed in the airstrike. Russia has been waging a year-old air campaign on behalf of Assad’s forces and closely coordinates with them.

Defense Ministry spokesman Maj. Gen. Igor Konashenkov said the airstrike near Dayr az Zawr airport, held by the government, was conducted by two F-16s and two A-10s. He did not identify the planes’ country affiliation, but said they were part of the international coalition. Konashenkov said the planes came from the direction of the Iraqi border, he added.

He added that if the coalition attack was launched by mistake, the reason for it was a “stubborn reluctance by the American side to coordinate its action against terrorist groups in Syria with Russia.”

ISIS has repeatedly attacked the government-held air base, which is an isolated enclave deep in extremist-held territory. The government controls the air base and parts of Dayr az Zawr city, while ISIS controls the entire province by the same name. An ISIS advance in Dayr az Zawr would endanger the lives of tens of thousands of civilians living in government-held areas. The Syrian Observatory for Human Rights said the Syrian army later recaptured most of the positions it lost to ISIS.

The U.S.-led coalition has carried out thousands of airstrikes against ISIS in Syria and Iraq over the past two years, allowing allied forces on the ground to liberate several towns and cities from the extremist group. Russia also carries out attacks against ISIS targets, in Dayr az Zawr and other parts of Syria.

“The coalition will review this strike and the circumstances surrounding it to see if any lessons can be learned,” the U.S Central Command statement said.

The cease-firetook effect on Monday​, and despite reports of violations, it has largely held. However, an aid convoy has been unable to enter​ rebel-held parts of the northern city of Aleppo -- a key component of the deal. On Saturday, a U.N. source told CBS News correspondent Elizabeth Palmer that the convoy, which has been stuck on the Turkish border, was expected to move on Sunday into eastern Aleppo.

The delay was caused by generals and diplomats trying to negotiate the convoy’s safe passage along a highly contested stretch of road, Palmer reports. The U.N. also blamed the Assad government for dragging its heels on the paperwork.

If all goes well, Palmer reports, two aid convoys carrying food for 80,000 people for a month will arrive in rebel-held Aleppo, which has been under intermittent siege by government forces all summer.

Russia has accused Washington of failing to rein in the rebels, and on Saturday Putin asked why the United States has insisted on not releasing a written copyof the agreement​.

“This comes from the problems the U.S. is facing on the Syrian track - they still cannot separate the so-called healthy part of the opposition from the half-criminal and terrorist elements,” Putin said during a trip to Kyrgyzstan.

“In my opinion, this comes from the desire to keep the combat potential in fighting the legitimate government of Bashar Assad. But this is a very dangerous route.”

He appeared to be referring to the Fatah al-Sham Front, an al-Qaeda-linked group previously known as the Nusra Front, which is deeply embedded in rebel-held areas and fights alongside more moderate groups. Abu Mohammed al-Golani, the leader of the group, condemned the cease-fire agreement in an interview with Al-Jazeera TV aired Saturday.

Russian Foreign Minister Sergey Lavrov echoed Putin’s remarks during a phone call with U.S. Secretary of State John Kerry. Lavrov noted the “refusal by an array of illegal armed groups to join the cease-fire,” and Washington’s obligation to “separate units of the moderate opposition from terrorist groupings,” according to a Foreign Ministry statement.

Under the cease-fire agreement, the U.S. and Russia would work together to target the Fatah al-Sham Front, as well as ISIS, while Assad’s forces refrain from striking opposition-held areas.

But Washington has warned Russia that unless aid is delivered to Aleppo, it will not move ahead with the formation of the joint coordination center.

The U.N. has accused Assad’s government of obstructing aid access to the contested city. The Russian military says insurgents have held up the delivery by firing on government positions along the main route leading into besieged, rebel-held districts, in violation of the cease-fire.

The Syrian government said it has done all that is necessary to facilitate the entry of aid convoys to Aleppo, but that armed groups have failed to withdraw from the supply routes and are committing “dangerous, provocative acts.”

Russia’s military said Syrian rebels violated the cease-fire dozens of times over the past day, including with strikes on military and civilian targets in Aleppo. Syrian activists said government forces killed five civilians in separate attacks on Saturday.

Syria’s conflict has killed more than 300,000 people and displaced half the country’s population since March 2011.