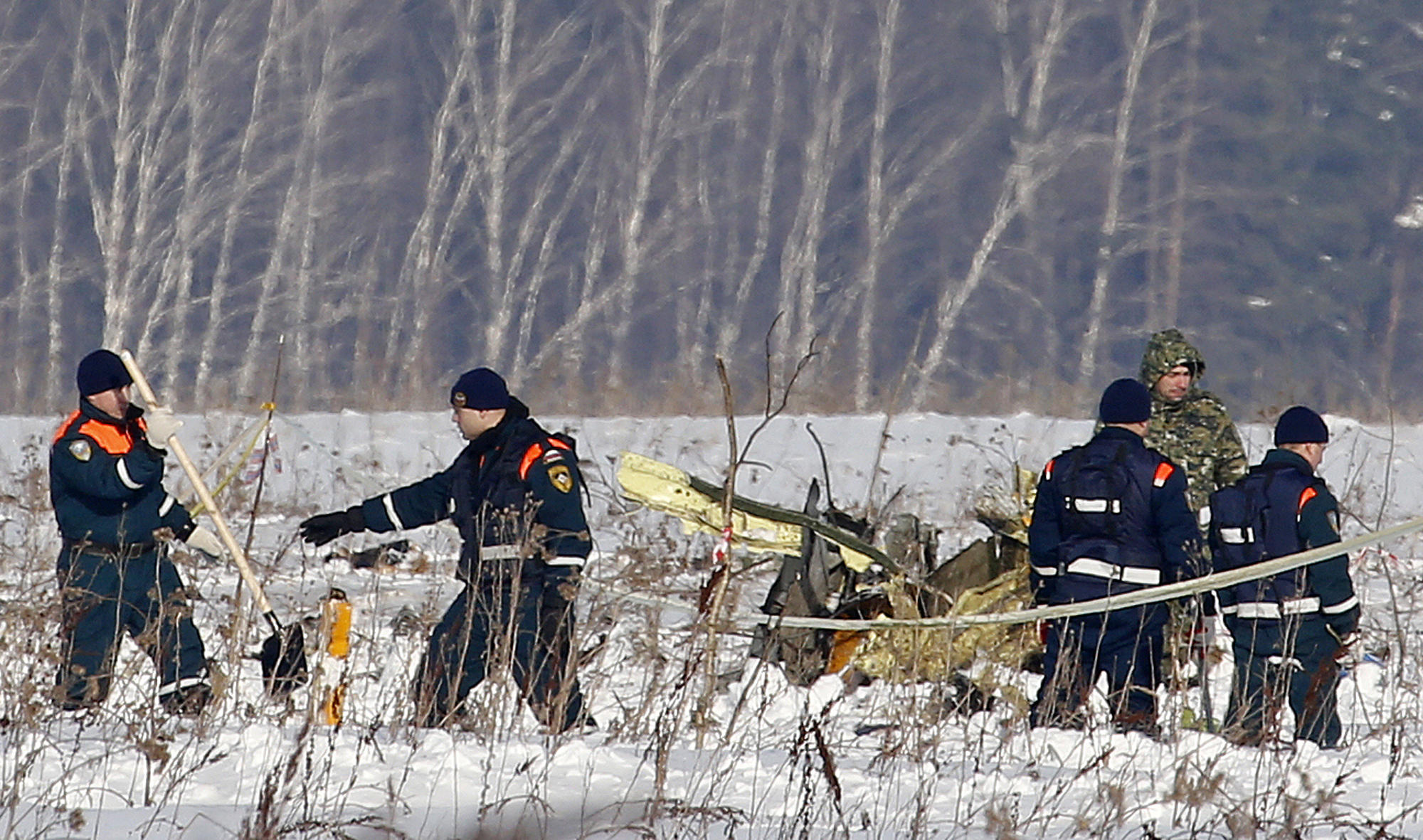 Investigators scoured the scene of one of Russia's worst-ever plane crashes Monday, after the passenger jet crashed Sunday near Moscow minutes after take-off, killing all 71 people on board. Both flight recorders were found among the wreckage, according to Russian news agency, TASS.

The voice recorder was found in a "satisfactory state," according to TASS, while earlier, the parametric recorder had also been located.

Saratov Airlines, the operator of the flight, suspended its use of all AN-148 aircraft until the end of the investigation into the cause of the crash.

On Monday, the crash site was enveloped in heavy snow that was waist-high in places, making it difficult to access, with emergency workers forced to reach the wreckage by foot and use snowmobiles.

Russia's Investigative Committee said it would consider explanations for the crash including human error, technical failure and weather conditions, as the country has experienced record snowfall in recent weeks. It did not mention the possibility of terrorism.

The Antonov AN-148 plane went down in the Ramensky district around 44 miles southeast of Moscow after taking off from Domodedovo airport in the Russian capital and disappearing off the radar at 2:28 pm local time on Sunday.

"Sixty-five passengers and six crew members were on board, and all of them died," Russia's office of transport investigations said in a statement.

A Swiss citizen and a citizen of Azerbaijan were among the fatalities on a list released by the emergency services ministry. Three children also died including a five-year-old girl.

The flight was operated by the domestic Saratov Airlines and was headed for Orsk, a city in the Ural mountains.

Around one hundred investigators and criminologists were working at the scene, the Investigative Committee, which investigates major incidents, said Monday.

The emergency services ministry said at least one of the two black boxes had been found.

With wreckage of the plane spread over more than 30 hectares around the crash site, it will take a week to inspect the whole area, the emergency services ministry said.

More than 900 people using equipment including drones were involved in the search operation, which has been reclassified as looking for bodies rather than survivors, the ministry said.

"We plan to carry out the main stage of the search operation in seven days because the plane debris is scattered over a very large area," emergency services minister Vladimir Puchkov said at the scene, quoted by Interfax news agency, adding that "heavy snow" hampered searchers.

"We walked about 600 to 700 metres across a field, with snow in places waist-deep," said Alexei Besedin, one of the first rescuers to reach the scene, quoted by the emergency services ministry.

"I felt a shock wave," Maria, a resident of a village near the crash site, told AFP.

"The windows shook," she said

The Russian-made plane was reportedly seven years old and bought by Saratov Airlines from another Russian airline a year ago.

Saratov Airlines was founded in the 1930s and flies to 35 Russian cities. Its hub is Saratov Central Airport in southern Russia.

Russian President Vladimir Putin offered "his profound condolences to those who lost their relatives in the crash," his spokesman Dmitry Peskov said.

Putin -- who is running for re-election in a March 18 poll -- cancelled plans to travel to the Black Sea resort of Sochi to meet with Palestinian leader Mahmud Abbas. Instead, the meeting was to take place in Moscow.

The governor of the Orenburg region, where the plane was heading, told media that "more than 60 people" on board the plane were from the region.

The region declared Monday a day of mourning with flags lowered and entertainment events cancelled.

With a population of 237,000 people, Orsk is the second biggest city in the Orenburg region, near Russia's border with Kazakhstan.

A light aircraft crashed in November in Russia's far east, killing six people on board.

In December 2016, a military plane carrying Russia's famed Red Army Choir crashed after taking off from Sochi, killing all 92 people on board.

The choir had been due to give a concert to Russian troops in Syria.

Pilot error was blamed for that crash.

In March 2016, all 62 passengers died when a FlyDubai jet crashed in bad weather during an aborted landing at Rostov-on-Don airport.