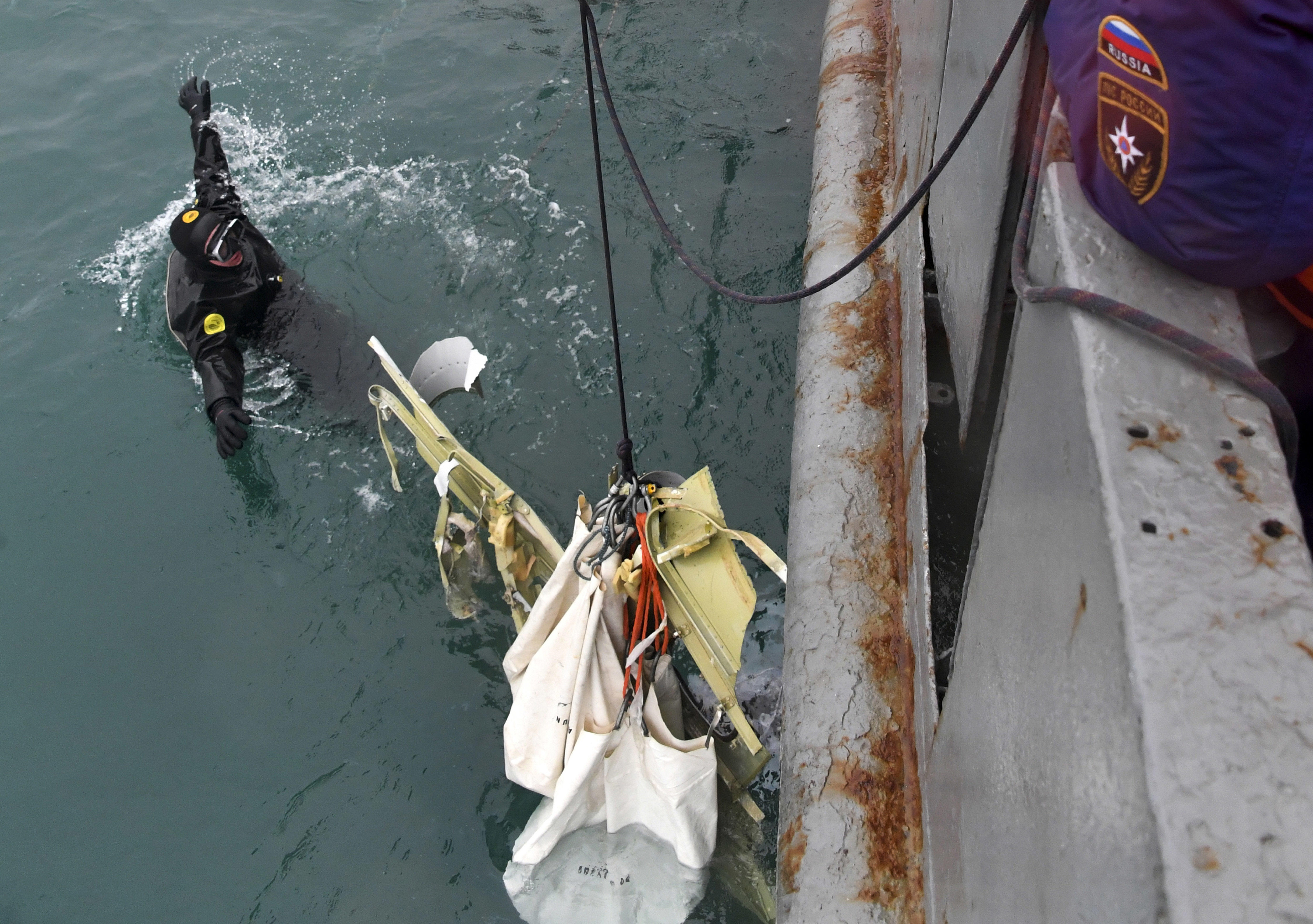 MOSCOW -- Flight recorders revealed no evidence of an explosion on board a Russian plane that crashed, killing all 92 on board, but investigators haven’t ruled out a deliberate mechanical impact to down the plane, a military official said Thursday.

Russian air force Lt.Gen. Sergei Bainetov, who heads the Defense Ministry commission conducting the crash probe, said that a cockpit conversation recorder contained the captain’s words that indicated a “special situation” that began unfolding on board the plane.

Bainetov wouldn’t elaborate on what may have led to the crash, but noted that it likely had been caused by several factors.

The Tu-154 of the Russian Defense Ministry crashed into the sea early Sunday, moments after taking off in good weather from the city of Sochi. It was carrying members of the Alexandrov Ensemble, widely known as the Red Army Choir, to a New Year’s concert at a Russian military base in Syria.

Bainetov said that the plane crashed 70 seconds after takeoff from an altitude of 820 feet while it was traveling at a speed of 224-230 miles per hour.

“After deciphering the first flight recorder we have made a conclusion that there was no explosion on board,” Bainetov said at a news conference.

“To examine all parameters of the work of engines, aircraft systems, to do the overall analysis of the flight, no fewer than 10 days are required, and we are hoping to present the final conclusions on the causes of the aircraft accident no earlier than in 30 days,” he said.

But asked if that means that investigators have ruled out a terror attack, Bainetov said “we aren’t ruling that version yet.”

“A terror attack doesn’t always involve an explosion,” he said. “Along with an explosion on board, there could have been some mechanical impact.”

He wouldn’t offer any details, saying that Russian law-enforcement agencies are working on the case.

Bainetov’s words appeared to contradict a previous statement from Russia’s top domestic security and counter-terrorism agency, the FSB, which has said it found “no indications or facts pointing at the possibility of a terror attack or an act of sabotage.”

It said investigators were looking into whether the crash might have been caused by bad fuel, pilot error, equipment failure or objects stuck in the engines.

Investigators have taken samples from a fuel tank used to fill the plane, which flew from Moscow’s Chkalovsky military airport and stopped in Sochi for refueling.

In an apparent attempt to downplay Bainetov’s statement, Russian Transport Minister Maxim Sokolov emphasized that “the version of a terror attack isn’t being considered as the main version.”

Sokolov said search teams have completed the bulk of efforts to recover bodies and debris from the crash site. He said 19 bodies and more than 230 body fragments have been recovered, adding that 13 big fragments of the plane and about 2,000 smaller fragments also have been pulled from the seabed.

The Tu-154 is a Soviet-built three-engine airliner designed in the late 1960s. Russian airlines decommissioned the noisy, fuel-guzzling aircraft years ago, but the military and other government agencies continue using the plane, which is still loved by crews for its maneuverability and sturdiness.

The plane that crashed Sunday was built in 1983 and underwent factory checkups and maintenance in 2014, and earlier this year. Investigators have taken relevant documents from the plant that did the job.