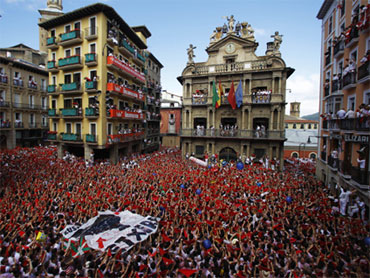 Thousands of people packed into Pamplona's main square Tuesday to spray each other with wine as a firecracker rocket blasted off to start Spain's San Fermin bull-running festival.

The nine-day festival got under way at midday with the traditional shout from the city hall balcony of "Viva San Fermin!" followed seconds later by the firing of the firecracker known as the chupinazo.

The rocket blast was the signal to the revelers - many in the festival's traditional dress of white shirts and trousers and red neckerchiefs - to erupt into party mode.

People sang and whooped while many drenched each other with all sorts of drink and threw eggs and flour.

Television shots from the air showed a veritable sea of red and white swaying back and forth in the square as a deafening roar could be heard rising up from the crowd.

In an almost laughable bid to try to keep the noise level down during a fiesta known for its all-night street partying, Pamplona town hall on Monday banned the street sale of vuvuzelas, the droning plastic horns so popular at World Cup matches in South Africa.

San Fermin's first bull-run is Wednesday at 8 a.m. (0600 GMT) when hundreds of people race ahead of six fighting bulls and six bell-tinkling steers - meant to keep them in a tight pack - charge down the 930-yard course from a holding pen to the northern town's bull ring.

Dozens of people are injured each year in the morning runs, most from falls but some also from gorings and tramplings by the beasts.

The fiesta, popularized internationally by Ernest Hemingway's 1926 novel "The Sun Also Rises," attracts tens of thousands of foreigners each year.