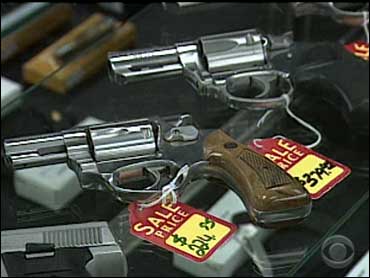 When 10-year-old Austin Smith heard Barack Obama had been elected president, he had one question: Does this mean I won't get a new gun for Christmas?

That brought his mother, the camouflage-clad Rachel Smith, to Bob Moates Sports Shop on Thursday, where she was picking out that special 20-gauge shotgun - one of at least five weapons she plans to buy before Obama takes office in January.

Like Smith, gun enthusiasts nationwide are stocking up on firearms out of fears that the combination of an Obama administration and a Democrat-dominated Congress will result in tough new gun laws.

"I think they're going to really try to crack down on guns and make it harder for people to try to purchase them," said Smith, 32, who taught all five of her children - ages 4 to 10 - to shoot because the family relies on game for food.

Last month, as an Obama win looked increasingly inevitable, there were more than 108,000 more background checks for gun purchases than in October 2007, a 15 percent increase. And they were up about 8 percent for the year as of Oct. 26, according to the FBI.

No data was available for gun purchases this week, but gun shops from suburban Virginia to the Rockies report record sales since Tuesday's election.

"They're scared to death of losing their rights," said David Hancock, manager of Bob Moates, where sales have nearly doubled in the past week and are up 15 percent for the year. On Election Day, salespeople were called in on their day off because of the crowd.

Obama has said he respects Americans' Second Amendment right to bear arms, but that he favors "common sense" gun laws. Gun rights advocates interpret that as meaning he'll at least enact curbs on ownership of assault and concealed weapons.

As a U.S. Senator, Obama voted to leave gun-makers and dealers open to lawsuits; and as an Illinois state legislator, he supported a ban on semiautomatic weapons and tighter restrictions on all firearms.

Gun advocates take some solace in the current makeup of the U.S. Supreme Court, which ruled 5-4 this summer to strike down the District of Columbia's 32-year ban on handguns. For now, gun rights supporters hold a narrow edge on the court, but Obama could appoint justices who would swing it the other way.

Franklin Gun Shop outside Nashville, Tennessee, sold more than 70 guns on Tuesday, making it the biggest sales day since the shop opened eight years ago. Guns & Gear in Cheyenne, Wyoming, also set a one-day sales record on Tuesday, only to break that mark on Wednesday.

Stewart Wallin, owner of Get Some Guns in the Salt Lake City suburb of Murray, Utah, said he sold nine assault weapons the day after Obama was elected. That same day, the gun store Cheaper Than Dirt! in Fort Worth, Texas, sold $101,000 worth of merchandise, shattering its single-day sales record, store owner DeWayne Irwin said.

One Georgia gun shop advertised an "Obama sale" on an outdoor sign, but the owner took it down after people complained that the shop appeared to be issuing a call to violence against the country's first black leader.

The president of a Montana gun manufacturer stepped down last month after word that he supported Obama led to calls for a boycott of the company.

While Wayne LaPierre, executive vice president of the National Rifle Association, attributes some of the sales boom to the tanking economy, he thinks the Democratic sweep is the top reason why guns are suddenly a hot commodity.

"I don't think he'll be able to stand up to that anti-Second Amendment wing of the Democratic party that's just been spoiling for chance to ban America's guns," LaPierre said of Obama.

During the campaign, the NRA warned that Obama would be the "most antigun president in American history." And while Vice President-elect Joe Biden owns shotguns, he has supported a ban on assault weapons and has said private sellers at gun shows should be required to perform background checks.

But Mark Tushnet, a Harvard Law School professor who has written a book about the gun debate, said new firearms regulations will be a low priority for an Obama administration and Democratic Congress facing a global economic crisis and two wars.

"Maybe the gun-show loophole will be closed, but not much else," he said in an e-mail. "I'd be surprised, for example, if Congress enacted a new assault gun ban."

Paul Helmke, president of the Brady Campaign to Prevent Gun Violence, said his organization will continue to press for what he calls "sensible" restrictions - background checks at gun shows, a ban on military-style assault weapons and cracking down on illegal gun trade. He believes he has the backing of the new administration on those issues, but any fears of a broader crackdown are unfounded.

"The one thing that they agree strongly with us on is that it's too easy for dangerous people to get guns in this country," Helmke said. "I guess if you're a dangerous person you might want to run out there and buy some more, but otherwise you should be OK."