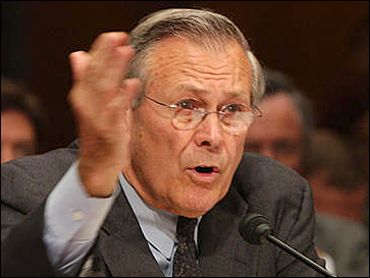 Thus far, no videos of abusive treatment have reached the public. But still photographs, first aired last week on CBS News' "60 Minutes II" have spawned a worldwide wave of revulsion that has damaged America's image overseas and sparked a political storm at home.

He said the Iraqis who were mistreated will receive compensation.

One week after shocking photos appeared showing prisoners subjected to sexual humiliation, Rumsfeld said the treatment was "inconsistent with the values of our nation. It was inconsistent with the teachings of the military ... and it was certainly fundamentally un-American."

During a total of six hours of testimony in the Senate and House, Rumsfeld sought to repair the damage done to American prestige aboard, to ease the anger of lawmakers caught off guard by the uproar and to shore up support for his own job among key members of Congress.

He said bluntly, "These events occurred on my watch. As secretary of defense, I am accountable for them. I take full responsibility."

Rumsfeld said he "would resign in a minute" if he thought he could not be effective. But he brushed aside Democratic calls to step down, saying, "I would not resign simply because people try to make a political issue out of it."

The defense secretary said those involved in the abuse would be brought to justice regardless of rank.

In addition to the known abuse cases and at least 25 prisoner deaths already reported, acting Army Secretary Les Brownlee said the Army is investigating 42 potential cases of misconduct against civilians that occurred outside prisons in Iraq, Afghanistan and nearby countries.

Friday's criticism was pointed at times. Sen. Carl Levin, D-Mich., noted with "deep dismay" that Rumsfeld and Gen. Richard Myers, the chairman of the Joint Chiefs of Staff, had briefed lawmakers about Iraq in a classified session last week but did not mention the major story the government knew was about to break in the news media.

Consultation with Congress "is not supposed to be an option but a long-standing and fundamental responsibility" of administration officials, Levin lectured Rumsfeld.

Halfway around the world, not everyone was as supportive.

"I don't care if Rumsfeld resigns. For us, the physical and mental and social damage can't be made up for by an apology or even a resignation," said Helmi Sharawy, director of the Cairo-based Arab-African Research Center.

Over and over, Rumsfeld told members of Congress he and President Bush were "blindsided" by the photos that were made public in a CBS broadcast last week. He said the pictures had been leaked, and had not yet reached the Pentagon when they appeared on television.

He also said repeatedly that Army officials had publicly disclosed the abuse when it was first reported and announced investigations into it.

Bush said as much in an interview with Al-Ahram, an Egyptian newspaper. "Obviously, our reputation has been damaged severely by the terrible and horrible acts, inhumane acts that were conducted on Iraqi prisoners," he said.

Bush, traveling in Iowa and Wisconsin, telephoned Rumsfeld before flying home to tell him he "did a really good job" in his testimony, White House spokesman Scott McClellan told reporters.

Six months before the presidential election, Rumsfeld's acceptance of responsibility drew a tart response from Sen. John Kerry, the Democratic challenger to Bush. "The chain of command goes all the way to the Oval Office," said the Massachusetts senator. "Harry Truman did not say, 'The buck stops at the Pentagon."'

Sen. Lindsey Graham, R-S.C., told reporters, "The American public needs to understand we're talking about rape and murder here. we're not just talking about giving people a humiliating experience." He did not elaborate.

Rumsfeld said a panel of retired officials would report within 45 days on "the pace, the breadth, the thoroughness of the existing investigations" determine whether more inquiries were needed.

After the hearing, he said the board was expected to include former Rep. Tillie Fowler of Florida, who has headed the Air Force Academy's oversight board into sexual assaults; James Schlesinger, a defense secretary from 1973 to 1975; and retired Air Force Gen. Chuck Horner. One other person is yet to be named.

The military began investigating the abuse shortly after it was first reported by one GI in January, and has already disciplined some captors who were involved. Rumsfeld also said two civilian contractors who worked at the Abu Ghraib prison were under investigation.

Questioned by Levin, Rumsfeld said that not only the captors who abused prisoners would be held accountable for their actions, but also commanders further up the military chain of command.

Military police, intelligence officers and 27 civilian contractors were all present at the Abu Ghraib facility, and Sen. John McCain, R-Ariz., peppered Rumsfeld with questions about who had overall command.

McCain also asked what instructions had been given to the MPs. The question goes to the heart of the findings in an internal Army report that the prison guards were told to "soften up" prisoners so they would be more cooperative during interrogations.

Lt. Gen. Lance Smith, the deputy commander of U.S. Central Command, said the abuses photographed at Abu Ghraib apparently took place in a cell block with 20 or 30 prisoners, usually late at night or before dawn, and was limited to "six or seven" military police officers.

Critics have said they believe the administration's decision at the start of the war on terror to declare some prisoners weren't covered by the Geneva Conventions might have led to a lax attitude in the military about what was and was not allowed.

But Rumsfeld said Iraqi prisoners were to be treated under the Geneva Conventions according to administration policy.

"This was an aberration," said Gen. Myers.

In Geneva, the International Red Cross said it had warned U.S. officials of abuse of prisoners in Iraq more than a year ago.

"We were dealing here with a broad pattern, not individual acts. There was a pattern and a system," said Pierre Kraehenbuehl, director of operations for the International Committee of the Red Cross.

Answering a question many lawmakers have posed, Kraehenbuehl said the abuse went beyond detainees held at the Abu Ghraib prison in the Baghdad area.