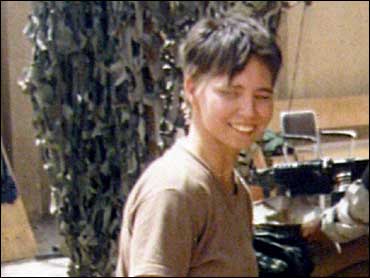 Army Pfc. Lynndie England, shown in photographs smiling and pointing at naked Iraqi prisoners, was charged Friday by the military with assaulting the detainees and conspiring to mistreat them.

England, 21, faces four allegations, according to a statement from the XVIII Airborne Corps at Fort Bragg.

She is accused of "assaulting Iraqi detainees on multiple occasions;" conspiring with another soldier, Spc. Charles Graner, to mistreat the prisoners; committing an indecent act; and committing acts "that were prejudicial to good order and discipline and were of nature to bring discredit upon the armed forces through her mistreatment of Iraqi detainees."

The charges must be taken up in Article 32 investigation, a process similar to a civilian grand jury, before they can be sent to a general court-martial.

"The military is trying to get this over with as quickly as possible but she will only now be assigned an attorney, she has to decide whether she wants to hire a civilian attorney, the civilian or military attorney has to become acquainted with the evidence against her, so this is going to take awhile," says CBS News National Security Correspondent David Martin.

England was reassigned to a military police unit at Fort Bragg when she returned from Iraq and will continue her duties, the Corps statement said.

CBS News has learned England and Graner, both divorced, were involved in a romantic relationship in Iraq and that England is four months pregnant with Graner's child.

Pictures of England and other Americans humiliating and degrading naked Iraqi detainees have sparked an international outcry over the U.S. military's handling of war prisoners.

In one photo from Abu Ghraib prison near Baghdad, England is shown standing making a thumbs-up gesture behind a pyramid of naked Iraqi men; in another, cigarette dangling from her lips, she points to a hooded and naked prisoner.

A third photo shows her leading around a naked Iraqi prisoner by a leash that is tied to his neck.

But family and friends of the Army reservist, a member of the 372nd Military Police Company based in Cumberland, Md., defend her and say she is being scapegoated by the military.

"I'm proud of my daughter," England's mother, Terrie England, told CBS News Correspondent Thalia Assuras. "She is not herself in them. It's like it's staged."

"Yes, I am very proud of my sister. I'm behind my sister and anybody else that's in the 372nd," said Klinevester, adding, "I think you're using her as a scapegoat. They're just picking on her."

A close family friend, Destiny Goin, said she believes the photos "were posed. I don't believe Lynndie would actually being doing the actions that you see in the photos. It's not like her to be like that, she's a caring person."

Terrie England says her daughter was just following orders, afraid she would get in trouble if she didn't go along.

"She told me, 'They told us to do whatever you have to do in order to get them to talk,'" says Terrie England. "She took orders. I mean she had questioned them to other soldiers with her but like the others said, 'Yeah, we just follow orders.'"

Many residents of her rural, one-stoplight, Mineral County hometown about 10 miles south of the Maryland border are wary of the media. But those who do talk express revulsion for the stories of abuse.

"Those people should pay for their actions," said William McGregor, 61, who retired as a master sergeant after 25 years in the Marine Corps, including two tours in Vietnam. "They had enough training to know right from wrong, and what they did was wrong."

In his hometown of Uniontown, Pa., Graner's friend Thomas Zavada is more forgiving.

"We're at war. We don't know the pressures," Zavada says, "being away from home. There's a lot of guys that could be in that position if the occasion arises."

Meantime, England's mother fears her daughter has become a scapegoat.