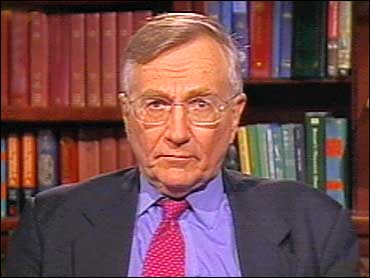 With operation Iraqi Freedom less than two weeks old, there has been plenty of criticism of the Pentagon and the American war strategy.

Hersh talked to The Early Show co-anchor Harry Smith about his article, which alleges there was a tug-of-war between Donald Rumsfeld and the top general getting ready for this war and that in the end, Rumsfeld won.

"Tug-of-war is sort of a mild description," Hersh said. "What I did is talk to the people who actually do the war plans. The guys who work - I'm talking about colonels and lieutenant colonels and majors and some young generals - who actually write the plan to take this to war. They work with the joint staff of the Joint Chiefs of Staff from the elite unit in the Pentagon. All services are involved. And they're the guys who spent the last six or eight months getting ready for the war.

Hersh claims that Secretary Rumsfeld repeatedly overruled the senior Pentagon planners on the Joint Staff, the operating arm of the Joint Chiefs of Staff.

"And six times, I write. They went specifically on six specific occasions, they went to Rumsfeld, gave him the plan that had been approved all the way up, top to bottom of the military chain of command, and Rummy sent it back. He said too many forces. He asked for what they call inside a redo," Hersh explained.

In a TV interview Sunday, Rumsfeld called the New Yorker article "pure fiction" said the war plan is all General Franks' idea. He called the war plan "innovative" and said he wished he could take credit for it.

Hersh does not imply that the war's supply problems or ambush of the Marine unit are the result of the lack of troops on the ground. He said all he knows is that there were fewer forces than needed.

"The guys in the field have been on line now for two weeks on duty: on line, two or three hours of sleep, no hot showers, no hot meals, no getting a chance for relief. And they've been facing the enemy constantly. After three days, all sorts of studies that the military have done show, the effectiveness of troops goes down enormously. We have no reserves. We have no way of helping these guys out, sending units in to relieve them. We're simply short-staffed. What we have is what you see in the field."

In Tuesday's issue of The Wall Street Journal, Gen. Barry McCaffrey is quoted as saying the U.S. should be fighting this battle with three U.S. armored divisions, and an armored cavalry regiment to provide rear area security.

Hersh agrees, "We have one mechanized division out there right now. We've got a lot of Marines, about 50,000 Marines, but they're separate. Separate units. The Army wanted four divisions, exactly right as McCaffrey said. And you know, it's more than just Rumsfeld cutting back the constant request for more troops."

Hersh says the planners also wanted to "preposition" enough tanks, Humvees and armored cars for three or four divisions. "Rummy said no, it's too expensive. So there is only enough equipment for one division and that's the division in the field," Hersh claims. "So we could fly all the troops we want into Kuwait right now, there's nothing for them to drive."

Gen. McCaffrey goes on to say in the Journal that if the U.S. shrinks from using direct and overwhelming violence on the Republican Guard and Fedayeen, it risks thousands of casualties in Army and Marine assault forces, and leaves in place an unintimidated, even an emboldened, terrorist threat.

Hersh said he couldn't comment on McCaffrey's view. "I could just tell you the Army doesn't believe in a fair fight. We like to send our boys, the way they want to do it is they send their boys in more than they need. It's very wasteful, it's not efficient, but it's the way you do it."

Many of the planners, he said, were recently in the field with the fighting troops and now feel as if they have let these troops down.

Hersh describes how, in the months leading up to the war, a split developed inside the military, with planners and their bosses warning that the war plan was thin on troops and materiel, and the top generals - including Tommy Franks and Richard Myers - supporting Rumsfeld. After Turkey denied the US permission to land the 4th Infantry Division in Turkey, Franks initially argued that the war ought to be delayed until the troops could be brought in by another route but was overruled, Hersh writes.

The article also notes Rumsfeld's faith in precision bombing. Hersh quotes one planner as saying Rumsfeld had two goals: "to demonstrate the efficacy of precision bombing and to do the war on the cheap." Rumsfeld and his two main deputies for war planning, Paul Wolfowitz and Douglas Feith, "were so enamored of 'shock and awe' that victory seemed assured", the planner said.

He also writes that a another big disappointment was the failure of the Shiite factions in southern Iraq to support the American and British invasion, and the general lack of support in the Middle East for the Americans and British.