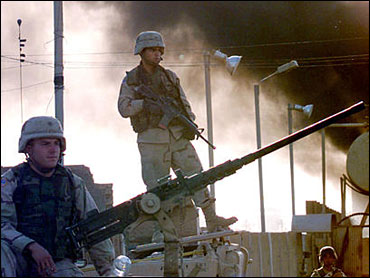 Defense Secretary Donald H. Rumsfeld said Friday that although major fighting in Iraq is over, it would be "a terrible mistake" to assume the war-torn nation is secure.

A day after President Bush went to a U.S. aircraft carrier to proclaim success in ousting President Saddam Hussein, the defense secretary urged caution and said much remains to be done.

Almost daily, U.S. troops exchange gunfire with Iraqis, sometimes as a result of anti-American protests. Lawlessness is rampant, in a land abounding with well-armed citizens and divided loyalties.

"The president said that we have moved from period of major military conflict to a period of stabilization," the secretary said. "There will be pockets of resistance. There will be people killed."