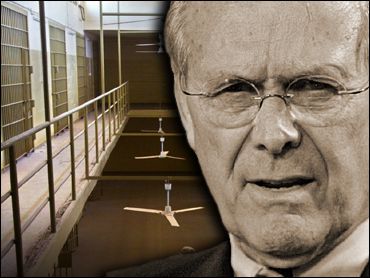 Rumsfeld told a Senate committee that Pentagon lawyers had approved methods such as sleep deprivation and dietary changes as well as rules permitting prisoners to be made to assume stress positions.

CBS News' 60 Minutes II will broadcast home video taken by a soldier working at the U.S. run prisons at Camp Bucca and Abu Ghraib, Tonight at 8 p.m. ET/PT.
Gen. Richard Myers, chairman of the Joint Chiefs of Staff, also noted that the rules require prisoners to be treated humanely at all times.

But Sen. Richard Durbin, D-Ill. said some of the approved techniques "go far beyond the Geneva Convention," a reference to international rules governing the treatment of prisoners of war.

Fears that the prisoner abuses would trigger a violent backlash appeared to be realized Tuesday when a video was posted on an al Qaeda linked Web site showing the beheading of an American civilian. The video said the killing was to avenge the prisoner abuse.

The Defense Department is conducting multiple investigations into the abuse, and congressional hearings are under way, as well. At the insistence of lawmakers, the Pentagon arranged for members of Congress to view photos and videos during the day. They depict the abuse, including examples of prisoners forced into sexually humiliating poses.

Durbin noted that one American GI was missing in Iraq, his whereabouts unknown. Given the circumstances, he asked Rumsfeld, "wouldn't it help if there was clarity from you and from this administration that we would abide by the Geneva Convention when it comes to civilian and military detainees unequivocally?"

Expanding his question to include detainees in Afghanistan and Guantanamo Bay, he asked whether such a declaration would "also serve to help American prisoners" held captive.

Rumsfeld replied that the Geneva Convention applies to all prisoners held in Iraq, but not to those held in Guantanamo Bay, where detainees captured in the global war on terror are held.

He said the distinction is that the international rules govern wars between countries but not those involving groups such as al Qaeda. "Terrorists don't comply with the laws of war. They go around killing innocent civilians," Rumsfeld added.

A new video obtained by CBS News' 60 Minutes II, shot by a GI serving at the Camp Bucca and Abu Ghraib prisons, shows the soldier's disdain for Iraqi prisoners. Of two who died, she says, "That's two less for me to worry about."

Meanwhile, the U.S. military has opened an investigation into alleged abuse of a detainee in Afghanistan.

Also Wednesday, U.S. senators were getting a look at more photos of American soldiers brutalizing Iraqi prisoners. Senators were being allowed to view the photographs for three hours Wednesday afternoon in a high-security, classified office in the Capitol.

The material senators were reviewing Wednesday was expected to show abuses that go well beyond the sexual humiliation depicted in photos already circulating publicly. It is not clear if the Pentagon will release them publicly.

At hearings into the abuse of Iraqi detainees over the past week, several senators have wondered whether interrogation tactics from Guantanamo Bay were adopted in Iraq.

There is disagreement over what Miller meant. Gen. Anthony Taguba, who investigated the detainee abuse, believes Miller's recommendation led to an inappropriate change in policy for MPs at Abu Ghraib prison in Baghdad, where several incidents of abuse were photographed.

At a Senate hearing on Tuesday, Defense Undersecretary for intelligence Stephen Cambone disagreed with Taguba, saying Miller's recommendation was only a suggestion that changed no guard duties.

Taguba did not blame any policy for the abuse shown in the photographs. But he and Cambone also split over a Nov. 19 order shifting control of Abu Ghraib to military intelligence. Taguba said this led to a struggle among officers for authority over the jail and its guards, but Cambone said guards remained under a military police brigade.