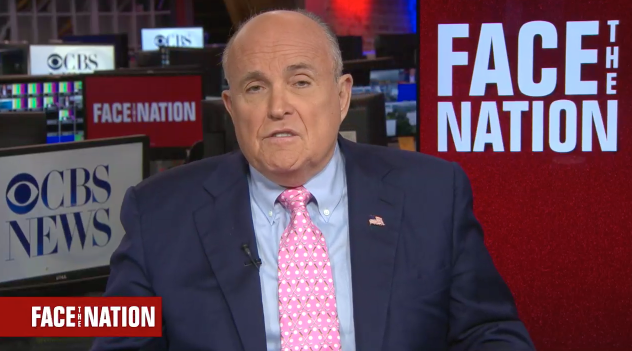 Giuliani, speaking on "Face the Nation" on Sunday, claimed that "troubling, unethical behaviors" among some in the Justice Department had tainted the Mueller probe, which began as an FBI counterintelligence investigation. The department's inspector general released a report this week into the handling of Hillary Clinton's email scandal, revealing that FBI agent Peter Strzok, who oversaw the Clinton investigation and was later removed from the Mueller probe, had suggested in text messages that the FBI would "stop" a Trump presidency two months before the 2016 election.

"How much did he infect that probe with his own very, very extreme positions? I don't know, but I want to find out before I go forward," Giuliani said when pressed about Strzok's influence on the investigation.

The inspector general found no evidence to suggest that political bias influenced the FBI's actions with respect to the Clinton probe. But Giuliani said he wants another investigation into the bureau's Russia investigation, which was eventually taken over by Mueller when he was named special counsel.

"It's crying out for someone to investigate the investigators," Giuliani said. "There should be a full and complete IG report and grand jury investigation of what happened here, after it became the Russia probe. What was the purpose of it? What did they gather?"

When asked if and when Mr. Trump would sit down with Mueller's team of investigators for an interview, Giuliani said he advised against it, but said his client is intent on providing his version of events.

What shape an interview would take is still up in the air. "What we'd really like is something responded to in writing. And it could be under oath."

But Giuliani added: "We are in rather sensitive negotiations with them … there might be a narrow area that we could all agree on."

Areas of the negotiation include the format, the scope of questions and the duration. Unlike former President Bill Clinton's videotaped testimony in the Whitewater investigation, Giuliani indicated his preference for that only the audio of the interview be recorded.

"I think we've already agreed that it should be just audio recorded," said Giuliani. "We would like to see it limited to some specific questions about the heart of the probe – the Russian alleged collusion. We think that those questions could be answered quickly. We think two hours. They probably think four. So let's settle at three."

However, Giuliani made clear that he wants to know more before any final agreement. "I'm not sure we can possibly recommend being questioned until we know how badly is this investigation infected by what Strzok did at the beginning."