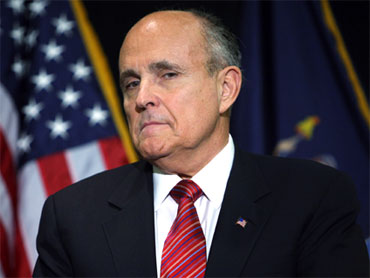 Sources close to former New York City mayor Rudy Giuliani confirm to CBS News that the Republican is talking to his political advisers about mounting another presidential bid.

Giuliani, whose 2008 presidential campaign fell flat, has learned from his mistakes, a source says, and will retool his strategy, beginning with a strong start in the early primary state of New Hampshire.

The New York Post first reported on Giuliani's moves Friday morning. According to the Post, Giuliani is optimistic about his chances, predicting a Republican primary populated with far-right candidates like Sarah Palin. That would allow him to stand out as a moderate candidate with strong national security credentials. The Post reports Giuliani will meet with voters in New Hampshire next month.

In an appearance on MSNBC this morning, the former mayor played down the latest reports but remained vague about his intentions. "So far I haven't found any political advisors to round up," Giuliani said. He added, however, that "of course I keep in the back of my mind" the possibility of running again.

Given Giuliani's lackluster performance in 2008, some skepticism about his presidential ambitions could be justified. Some insiders told the Post his current moves are designed to keep him relevant and possibly boost his speaker fees.

Also, some recent polls suggest another presidential bid could be a long shot for Giuliani. He was left out of a New Hampshire Journal poll that surveyed New Hampshire residents about potential Republican candidates, and he failed to get any support in a National Journal survey of about 100 Republican "insiders."