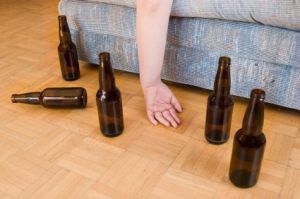 Authorities say a couple in Putnam Township, Mich., had an unexpected house guest - a drunken 27-year-old man who wandered into their cottage and climbed into bed with them.

The Livingston County Daily Press & Argus of Howell reports that the man showed up in their bedroom around 3:30 a.m. Sunday.

Police say the couple left the bedroom and called 911, and that officers arrived to find the intruder deeply asleep, with his shorts partly down.

Police say the "guest" then awoke and said, "This isn't my house." He explained he went out drinking nearby after putting his 2- and 4-year-old children to sleep at his own home a few doors down.

The kids were found safe and sound asleep, and placed with neighbors. Their embarrassing father was booked on suspicion of illegal entry and released on bond.