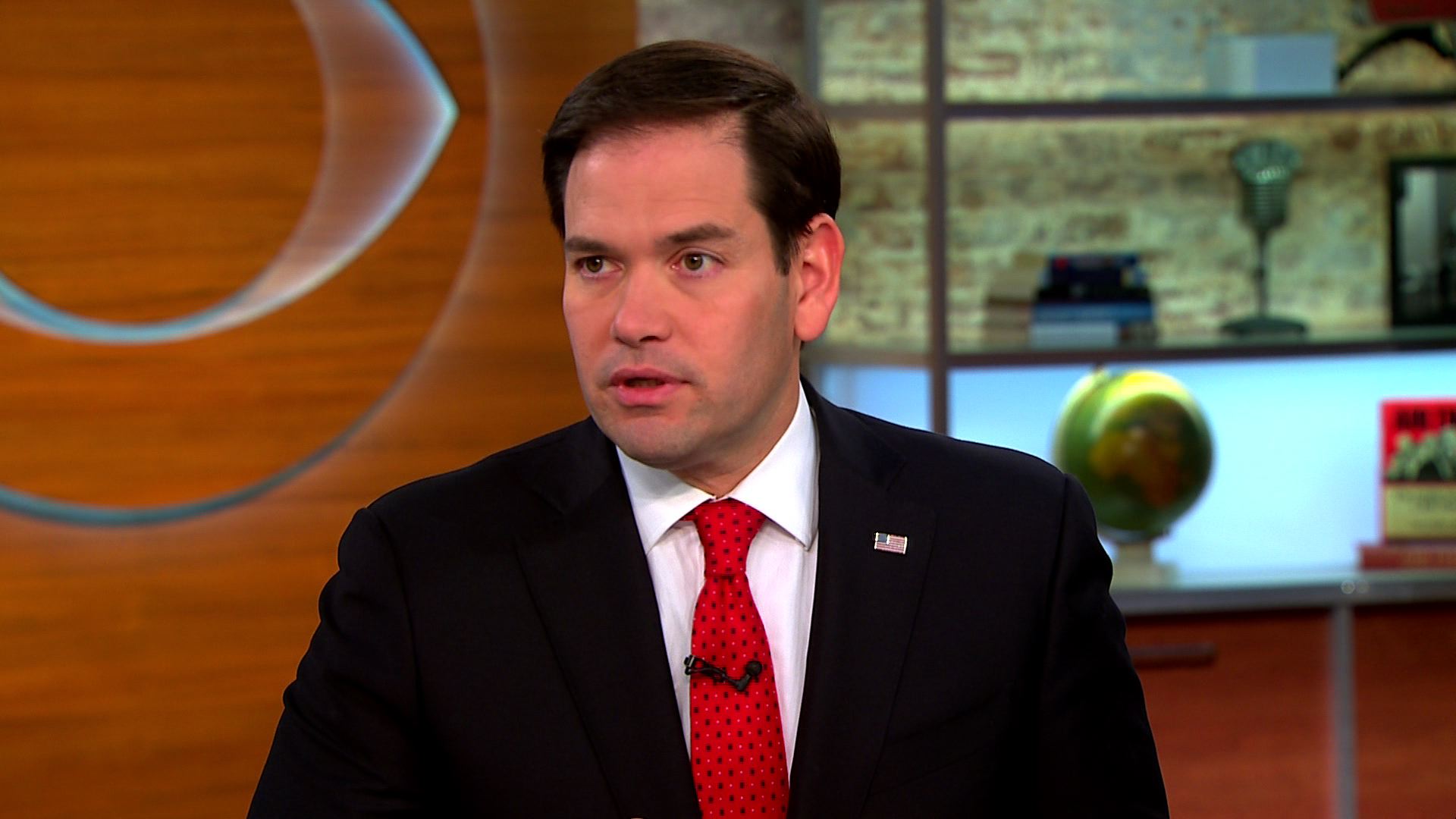 Marco Rubio slammed the idea of expanding background checks for gun sales during an interview with "CBS This Morning," just days after a deadly shooting in San Bernardino claimed 14 lives.

"None of these crimes that have been committed -- or what I believe is a terror attack in California -- would have been prevented by the expanded background checks," the GOP presidential candidate and Florida senator said Friday. "The fact of the matter is these individuals would have passed."

"None of the major shootings that have occurred in this country over the last few months or years that have outraged us would gun laws have prevented them," Rubio added. "In fact, many of them existed despite the fact that local jurisdictions had gun laws even stricter than what you find in other jurisdictions."

He pushed back against the notion of so-called "gun show" and online loopholes in the current laws, saying it puts an "incredible burden" on individuals that simply want to sell their firearms.

"What they're trying to do now would not solve any of these problems and, in fact, would impede the Second Amendment right of a large number of Americans," the GOP contender said.

If such restrictions on firearm purchases were implemented, Rubio said, "I decide I want to sell my gun to a friend of mine...now you have put an extraordinary burden on me to go out and conduct a background check. And I'm liable if i get it wrong."

As an individual, Rubio said, it would be "very difficult to implement, almost impossible to enforce."

Instead, Rubio pointed to "cultural changes" in the U.S., coupled with mental health issues, as the reason for the rise in mass shootings.

"We have a violence problem in America," Rubio said. "It's a combination of cultural changes that have occurred in our country and mental health issues."

Adding to those problems, Rubio said, was the issue of "homegrown violent extremism."

Though officials have told CBS News that the two suspects in the San Bernardino shooting, 28-year-old Syed Rizwan Farook and his wife Tashfeen Malik, were not on any U.S. terror watch lists, terrorism has not been ruled out as a possible motive for the attack.

"It is going to be very hard to find someone who has never done anything wrong in their life, who was radicalized six months ago online," he said, pointing to the fact that Farook was a U.S. citizen, born in Illinois, who seemed to "live a normal everyday life."

That is a "very significant and difficult threat to confront," Rubio added.

To prevent such domestic attacks, the senator pushed for "robust intelligence gathering capabilities to disrupt plots."

The Florida Republican was sharply critical of some of his Senate colleagues and presidential rivals who voted in favor of the USA Freedom Act, which stripped the NSA of its phone metadata collection powers.

"We can now not access the phone record of individuals that we either suspect being involved in terrorism or who carry out an attack to see who they were coordinating and talking to," he said.

Rubio also issued a scathing condemnation of President Obama over his climate change policies, just as the U.S. is poised to join other countries in Paris to sign a pledge combatting global warming and reduce carbon emissions.

In an interview with CBS News earlier this week, the president slammed Republicans like Rubio for denying the human causes of climate change: "Mr. Rubio is from Florida, and you can go now to places in South Florida where when the sun is out during high tide, you've got fish swimming in the streets because the flooding is so high. The evidence is there right now that drought, floods, storm surges are hurting people right now. And that's only gonna get worse."

Rubio scoffed at the president's words, saying that the reason for flooding in his home state "might be because of some rise in the sea level, but primarily it's because Miami and all of South Florida is built on a swamp."

He added, "Everything the president advocating for, even the scientists admit, we don't believe it would make a dramatic impact in the near future."

The presidential hopeful also cautioned against trusting developing countries like China or India when it comes to climate change pacts.

"What deal has China ever followed through on?" Rubio said. "They are not going to hamstring their economy."