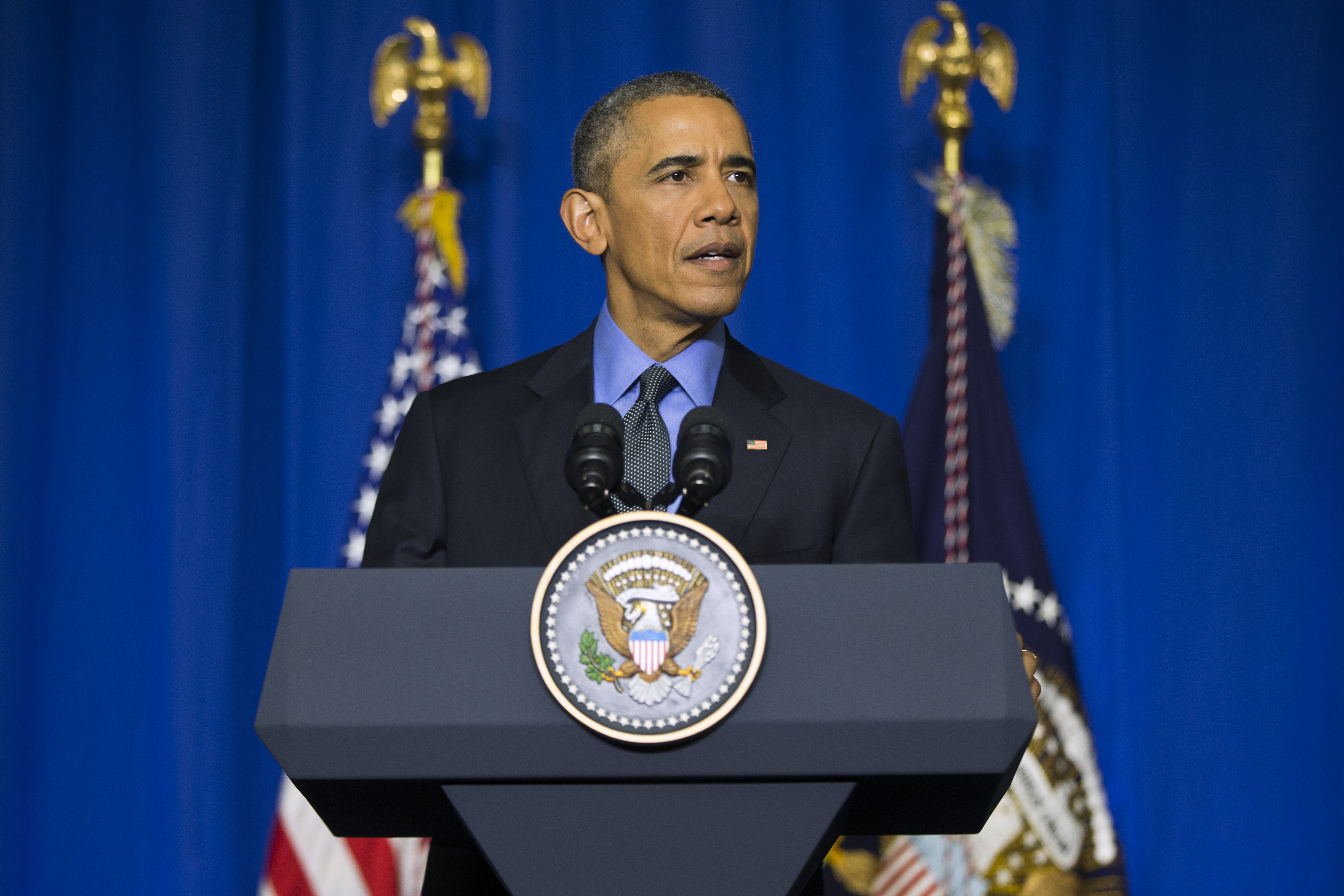 During a news conference at the COP21 climate conference in Paris on Tuesday, President Obama had some words for the Republicans hoping to win his job: "Everyone else is taking climate change really seriously." In other countries, he said, "They think it's a really big problem. It spans political parties."

But in the United States, everything about climate change is politically divisive. There appears to be little common ground on what causes it, what to do about it -- or even, in the case of some Republicans, whether the problem exists at all. While the president noted that "99.5 percent of scientists and experts [and] 99 percent of world leaders" agree human-caused climate change needs to be reckoned with, some Republican leaders have called it a "hoax" and a "contrived, phony mess."

"While the world is in turmoil and falling apart in so many different ways especially with ISIS, our President is worried global warming -- what a ridiculous situation," GOP frontrunner Donald Trump said in a video post on Instagram.

Similarly, New Jersey Gov. Chris Christie -- who has acknowledged in the past that climate change is real -- said during a press conference that Obama "is struggling mightily to be relevant in a dangerous world, and he's focused on the wrong climate."

This sharp back and forth is nothing new, but it underscores just how divisive and dirty a term "climate change" has become in the U.S. political arena.

Just ask one of Christie's predecessors, former New Jersey Gov. Christine Todd Whitman, a Republican who served as Administrator of the Environmental Protection Agency during Pres. George W. Bush's first term. That background gives her a unique perspective on the political controversy raging over environmental issues today. How did something that the overwhelming majority of climatologists agree on become a point of political debate?

"It's probably because science is never exact -- I mean you can find that over 97 percent of scientists say 'this is real,' but then there are those three who say 'no, it's not.' It's an easy issue to demonize. They can say, 'well it's not 100 percent,' " Whitman told CBS News.

Whitman is a moderate Republican who has long been critical of the sharp partisan nature of American politics. In 2005, she published "It's My Party, Too: The Battle for the Heart of the GOP and the Future of America." The book drew on her past experience in elected office and time serving in the Bush administration. To Whitman, the growing move to political extremes -- on both the left and right -- is not in the best long-term interests of the country.

"Everything has gotten so partisan. In many ways, climate change now has become one of those signature issues -- like what taxes has been for Republicans for years," Whitman added. "The truth, of course, is somewhere in between. Yes, the Earth has been changing since it was formed, we don't 'cause' climate change, but we do impact it. It's all in the nuances, which makes it so easy to demonize."

Whitman stressed that taking something like climate change, which bears serious ramifications for future generations, and turning it into fodder for political spin is dangerous for the public at large, especially heading into a presidential election year.

"Right now, you are kind of torn in terms of how much you want to see (politicians) do. Obama, right now, has to lay the framework for the future, but can't get a whole lot done. Again, I don't want to see the various presidential candidates get pushed into positions that they can't come back from," Whitman said. "I mean you don't want to see Hillary (Clinton) pushed so far left that she would rule out something like nuclear energy, but she'll have a lot of Democrats pressuring her to do that. On the right, it's the same -- you have people saying they don't believe in climate change. You will find yourselves at the end of the day where we just can't move forward and that is not where we want to be."

The future of nuclear energy has been Whitman's focus for the past decade. She has served as co-chair of the Clean and Safe Energy Coalition (CASEnergy Coalition) -- which advocates for nuclear energy options -- since it was formed in 2006. Whitman said that CASEnergy "doesn't lobby," but is designed to offer information and "answer people's questions" about nuclear, "clean" energy. The coalition is funded by the Nuclear Energy Institute, a nuclear energy lobbying group.

What does Whitman think of the energy and climate policies of those currently running, on either side?

"From what I've heard, Hillary Clinton has a broad energy plan. (Ohio Gov. John) Kasich does, as well. Jeb Bush doesn't believe in climate change, but he has more moderate proposals," Whitman said of the 2016 field. "But this is absolutely the wrong time to be looking at policy because, unfortunately, it's so hyper partisan during the presidential campaign that you are not going to get a serious discussion about any policy until next November."

The trend over the past decade has been for liberals and conservatives to push further to their respective sides. A 2011 paper from Aaron M. McCright of Michigan State University and Riley E. Dunlap of Oklahoma State University analyzed data from 10 national Gallup polls between 2001 and 2010 to examine how liberals and conservatives receive and respond to information on climate change. The results show that over that decade, liberals grew much more likely to report believing climate change has already begun, while conservatives became increasingly likely to say the opposite.

The study also pointed out the role of the media in fueling this split. "Such polarization likely has continued in recent years given the heightened balkanization of news media (e.g., MSNBC on the Left and FOX News on the Right), allowing Americans to obtain their news from outlets that reinforce their political beliefs," the authors write.

In the latest CBS News/New York Times poll, released Monday, almost three-quarters of Democrats (72 percent) and half of independents (52 percent) said they believe global warming is caused by human activity, but less than a third of Republicans (32 percent) agreed.

However, some views on this issue are shifting. The poll found that the number of Americans who believe global warming is caused by human activity has risen 11 points since 2011.

For a seasoned politician like Whitman, could she ever see herself voting for a Democrat if, say, a nominee on the left had a more aggressive climate change policy than his or her counterpart on the right?

"The way I would base my vote would not be on a single issue," she said. "It's not the only issue I would bet on. It is based on a lot of factors."