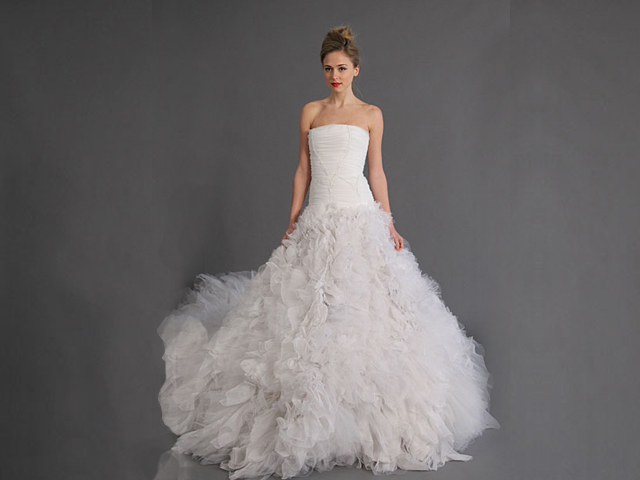 Gown designers are taking their cue from the royal wedding, wasting no time preparing offerings inspired by Friday's nuptials - even before the big event.

It will make Westminster Abbey's center aisle the center of the fashion world, as Kate Middleton unveils the most anticipated dress of the decade - in what famed designer Bruce Oldfield calls "the fashion event of the century."

Queen Victoria was a game-changer when she wore white to her 1840 wedding, setting the standard for nearly every bride who followed. And images of Princess Diana's 25-foot train, cascading down the steps of St. Paul's Cathedral, inspired designers for decades.

On "The Early Show" Wednesday, Brides.com Editor in Chief Julie Raimondi hosted a mini-fashion show of gowns designers have already fashioned after what they think Kate will wear.

The gowns Raimondi featured on the show, she says, were the hottest trends from Bridal Fashion Week. "These princess-like trends were obviously inspired by the popularity of Kate Middleton and the influence of this royal wedding," Raimondi points out.

"Kate's dress will be an important dress and one that will be talked about forever, but her wedding is already changing the bridal market. All of the dresses that we're showing are fresh from the runway and are not yet priced, but will be featured in the designers' 2012 lines.

"We're showing gorgeous gowns that probably will range in price from $1,200 to well over $10,000, but these trends will be soon found in every price point for every princess bride-to-be."

This classic grand tulle ball gown, which we saw all over the runway and is clearly a result of royal fever. This one is by Alfred Angelo and features a corset top with layers and layers of tulle at the bottom. The tulle is cut, giving this a modern, edgier look, and the top features enough embellishments to match the grandness of the bottom.

Probably the most exciting, and fun, trend we're seeing is the explosion of the wedding fascinator. When the focus is on a signature accessory, it's important to keep the gown simple and sleek. This simple mermaid gown is by Junko Yoshioka, and has amazing lines and a crisp, modern edge that beautifully showcases the playfulness of the hat. We predict hats won't solely be worn by the wedding guests, but by brides, as an interesting and intricate alternative to veils.

A royal wedding inspires a return to the formal. This is a gown by Lazaro, and represents the trend of over-the-top embellishments. In recent years, wedding gowns have really paired down, so this is something very different -- it's all about beading and lace and sparkle, along with a formal silhouette, so the effect is very "more-is-more," and it's something we saw a whole lot of in the 2012 collections.

When Princess Diana came out in the voluminous princess ball gown with puffy sleeves and layers of tulle, it became the new "standard." The David and Elizabeth Emmanuel gown was made of 275 yards of pearl-studded silk taffeta, tulle, and netting. It was a lot -- even for the '80s! Thankfully, today's princess ball gowns are toned down, but will always epitomize royal weddings, since gowns must be big and grand to suit a cathedral setting.

This is a huge departure from what wedding gowns have looked like for the past 10 years, and it's all about the sleeve. Getting married in Westminster Abbey, Kate's gown will likely have sleeves, and that has inspired sleeved gowns to pop up in almost every line. This one is by Ramona Keveza. The body of the gown is simple and flattering, and all the styling is around the arms and neck, making this a very formal look, and surprisingly sexy.

This is also reminiscent of another royal wedding when, in 1956, Grace Kelly went from Hollywood star to real-life princess in a fairy-tale gown by MGM costume designer Helen Rose. The dress was made from 125-year-old Valenciennes rose point lace, 25 yards of silk taffeta, and 98 yards of tulle, and the veil was covered with lace appliquéd lovebirds and thousands of pearls. It was very ornate, without being too much.

This Douglas Hannant gown features a 12-foot tulle train. Princess Diana's train was 25 feet, so you can imagine what a spectacle that was. We don't expect Kate to go that distance, but she will have a grand train which, like the ball gown, is almost crucial to fill up the space of Westminster Abbey. This kind of statement gown would do just that. Although it's much too daring on top for a royal wedding, it epitomizes the grand, fabulous, over-the-top and super-sexy gowns from the 2012 lines that scream princess fantasy!