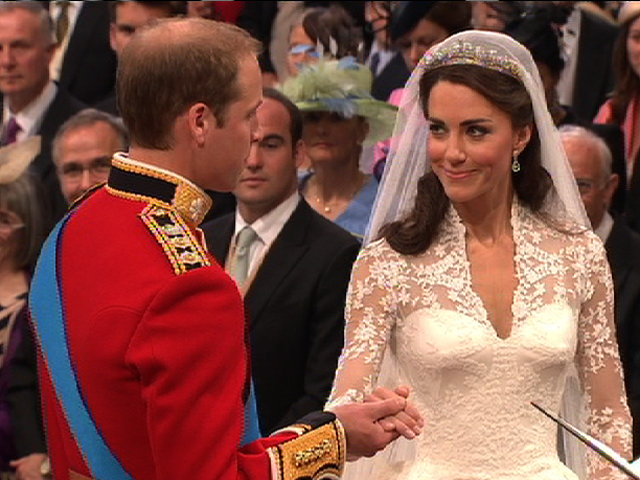 There's a law in England going back hundreds of years that gives princes the edge over princesses when it comes to inheriting the crown.

Now, reports CBS News correspondent Charlie D'Agata, there's a push to update that law, so the first child of Prince William and Catherine, whether a male or female, would succeed William.

When two young people fall in love and have a "little" marriage ceremony, D'Agata observes, it's only natural for talk to turn to the pitter-patter of tiny feet.

But when those feet are walking in the footsteps of kings and queens, a bundle of joy could trigger a constitutional crisis.

The way things stand, if the Duke and Duchess of Cambridge have a baby girl first, her claim to the crown would be pushed aside if and when a younger brother comes along.

It's been that way for centuries.

One British woman told CBS News it's a "fuddy-duddy tradition. It should be overturned."

Queen Elizabeth II had no brothers. Prince Charles, William's father, was first-born. William doesn't have any sisters, so it hasn't really been an issue until now.

British Prime Minister David Cameron is leading the charge, saying in this day and age of equal rights, it's time to drop outdated notions of male superiority.

He's not alone in thinking the law should be changed.

A British-American man told CBS News, "It was made by male chauvinistic pigs in the years past. It's (about) time we change it all."

Cameron says while he's at it, it's also time to lift the law banning British monarchs from marrying Roman Catholics.

It goes back to the time of Henry VIII, who broke with Rome and feared Catholics as a threat to the crown.

But the reforms are not just Cameron's call.

He'll have to get approval from all 16 British Commonwealth countries -- like Canada and Australia -- that still have the British monarchy as their head of state.

What does the Royal Family itself have to say about it? Not a lot.

The prime minister says he would like to have this business resolved before a baby is born to avoid an awkward situation, to say the least. He says William and Kate will be part of the discussions.