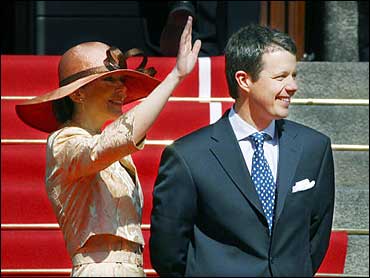 Emblems of love pervaded the Danish capital on Thursday, and well-wishers expressed the city's romantic mood a day ahead of the planned fairy tale wedding of Crown Prince Frederik and Australian commoner Mary Donaldson.

"People are truly happy for them," said Mette Wandel, 40, placing chocolate hearts in a special wedding display in a downtown confectionary store. "I think it's all so festive."

A street sign outside a nearby sports bar promised live coverage of the wedding Friday at the city's Lutheran Cathedral.

Elaborate flower arrangements adorned streets and cobblestone squares throughout Copenhagen, where buildings were decorated with huge banners of Frederik and Donaldson, holding hands and smiling at each other. Danish and Australian flags fluttered in the light breeze, as television crews from around the world set up boom cameras along the royal couple's parade route.

"People are so happy. Everyone is smiling," said Angelika Marikovskaya, a 35-year-old immigrant from Belarus after snapping pictures of her two sons posing in front of a flower arrangement in red, white and gold in the downtown Gammeltorv square.

Along Stroeget, Copenhagen's main pedestrian thoroughfare, fashion retailers, jewelers and hair dressers displayed pictures of Frederik and Donaldson and messages of best wishes in their windows.

Escorted by the mounted royal guard, the horse-drawn carriage made a test run through the capital — without Frederik and Donaldson. The carriage was open, but the palace would decide Friday at the last minute whether to use a closed one instead, should the weather turn ugly.

Forecasts predicted more sun Friday, but with a chance of showers in the afternoon.

"I just think it's great," said Barron Ellesworth, a tourist from San Diego, California. "I can understand the excitement that they have. And even our tour guides, when they talk, when they see the horses, the mounted police and they say, 'Oh look!"'

Lots of heads turned when a motorcade carrying Frederik, Donaldson and their respective families rushed by to a wedding gift ceremony at the Danish Parliament.

"That was the queen," said Lis Rasmussen, 62, part of a group of senior citizens who had come downtown to see the flower arrangements. "Did you see her wave?"

More than 250,000 people are expected to jam the city center to get a glimpse of the newlyweds after the ceremony Friday.

At the Rosenborg Castle, one of downtown Copenhagen's many fairy tale-like castles, the Royal Danish Life Guards, who will wear the red and blue gala uniforms on Friday, were getting ready.

"Tomorrow is a very special day," guardsman P.D. Fugsmann said. "We're guarding the queen and the prince — and the crown prince and the future crown princess who are getting married tomorrow (Friday). All the royals will be there ... so it's an important job for us to keep cool."