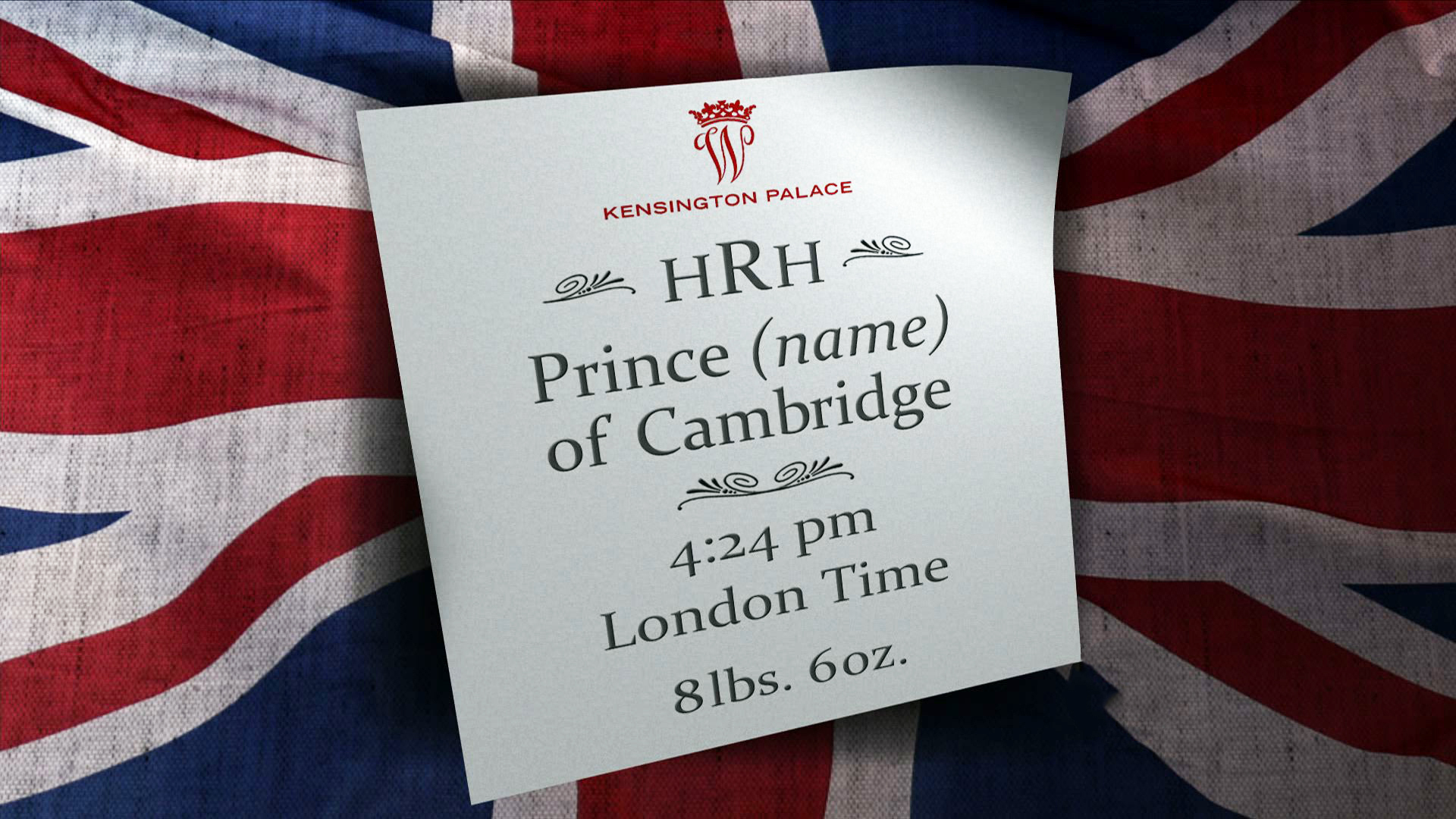 LONDON It's Day One of parenting for Prince William and Kate. After the excitement and fatigue and joy of childbirth -- emotions shared with a nation -- the young couple is expected to bring the prince home and start to care for him.

But the lad's name -- and his likeness -- remain a royal mystery. And as the infant child begins a long journey expected to see him someday become a king, Brits -- and people from around the world -- have been joining the royal family in celebration.

In a new statement released by Kensington Palace on Tuesday morning, Prince William and his wife Kate thanked the hospital staff for the "tremendous care the three of us have received," but gave no hint as to when they might leave the hospital or announce their son's name.

"Mother, son and father are all doing well this morning," a palace spokesman said.

Paying tribute to the young couple the evening before, Prime Minister David Cameron said "the whole country will celebrate," and predicted that William and Kate would "make wonderful parents."

Tourists and well-wishers flocked to Buckingham Palace on Tuesday, lining up outside the gates to take pictures of the golden easel on which, in keeping with royal tradition, the birth announcement was displayed. A band of scarlet-clad guardsman at the palace delighted onlookers with a rendition of the song "Congratulations."

Other celebrations Tuesday included gun salutes by royal artillery companies to honor the birth and the ringing of bells at London's Westminster Abbey.

Riders in uniform trotted past the palace to Green Park, where six field guns fired 41 blank rounds. An additional 62 gun salute was fired off at the Tower of London, the medieval royal palace which sits on the north bank of the Thames in the capital.

At the same time, 10 bell ringers began sounding a royal salute to the new prince. The bell peal will last a full three hours, and will be the same one played to mark William and Kate's marriage. Three of the 10 bell ringers who will be in the Abbey on Tuesday were also on hand 31 years ago to do the same job when William was born.

The young prince was delivered at 4:24 p.m. in London on Monday, but the royal couple kept the world waiting another four hours to learn of the birth.

Even grandfather Charles seemed clueless an hour after the birth. Asked by a reporter upon emerging from a public event in the northern English city of York if there had been any news, he laughed off the question and said, "none," as he got into a waiting car.

But news there was. The birth was announced via a formal press release issued by Kensington Palace, which stated that the duchess "was safely delivered of a son" at 4:24 p.m., local time, weighing 8 lbs., 6 oz.

CBS News correspondent Elizabeth Palmer reported that William, a truly modern dad, remained with the duchess throughout her labor. It was the prince who called the queen, Prince Charles, Prince Harry and the Middletons with the news at some point before the public was notified.

Halfway around the world, royalist group Monarchy New Zealand said it had organized a national lightshow, with 40 buildings across the island lit up in blue to commemorate the royal birth, including Sky Tower in Auckland, the airport in Christchurch, and Larnach Castle in the South Island city of Dunedin.

The baby isn't even a day old -- and may not even been named for days or even weeks -- but he already has a building dedicated to him.

In Australia, Prime Minister Kevin Rudd said an enclosure at Sydney's Taronga Park Zoo would be named after the prince as part of a gift from Australia. The government would donate 10,000 Australian dollars ($9,300) on the young prince's behalf toward a research project at the zoo to save the endangered bilby, a rabbit-like marsupial whose numbers are dwindling in the wild. The prince's name -- when known -- would be added to the bilby enclosure.

"I don't know if the royal family would need this, but we'll probably give them a free pass to Taronga Park Zoo as well," Rudd said.

British media joined in the celebration.

"It's a Boy!" was splashed across many U.K. front pages, while Britain's top-selling The Sun newspaper temporarily changed its name to "The Son" in honor of the tiny monarch-in-waiting.

"REGAL HAS LANDED," the paper cried.