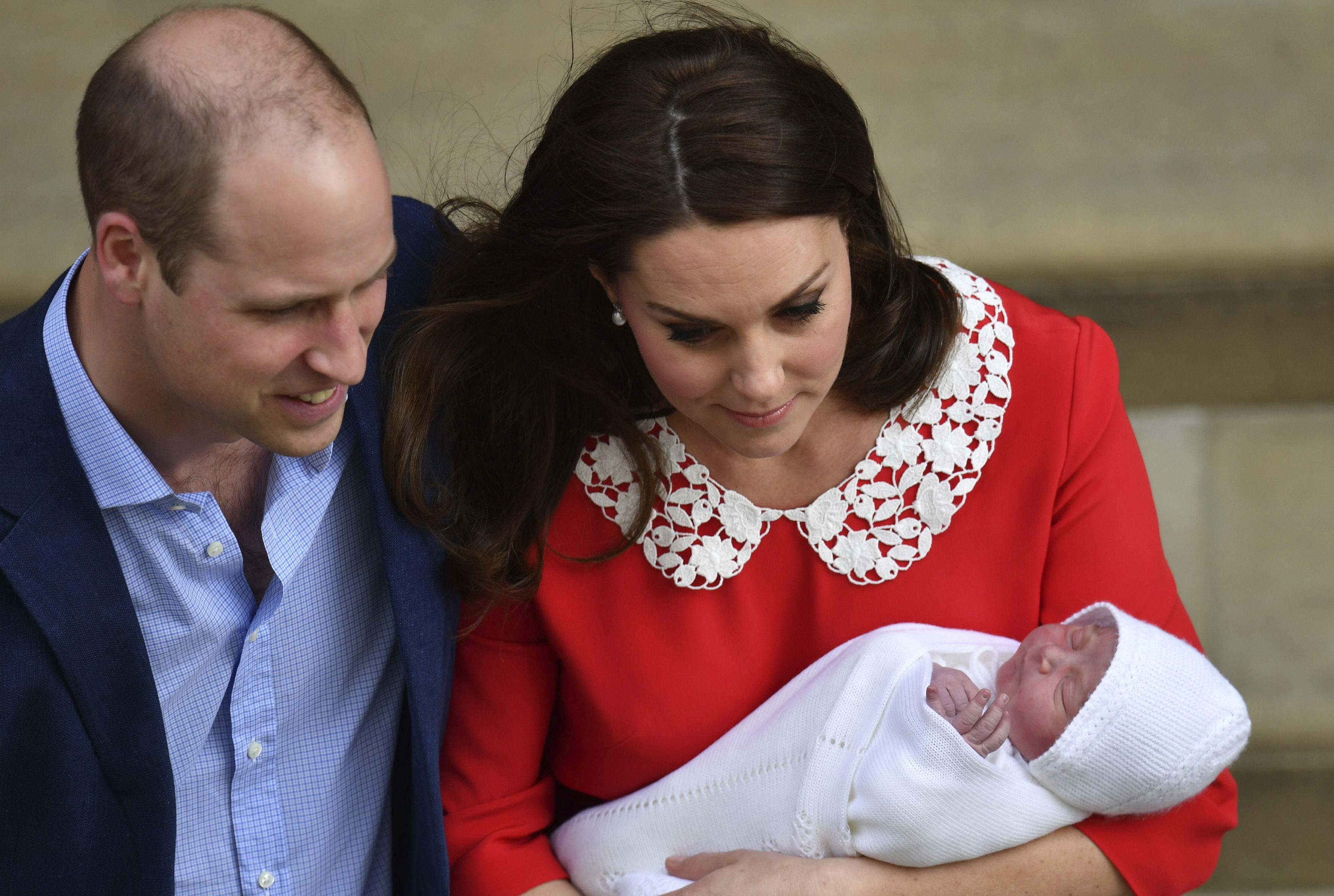 Prince William and Kate Middleton, the Duke and Duchess of Cambridge, welcomed baby number three Monday morning. The waiting game is on for what the royal baby's name will be.

The Duchess of Cambridge and Prince William have left a London hospital and headed home with their newborn son. The duchess, who gave birth Monday morning, emerged from St. Mary's Hospital about seven hours later alongside her husband, holding the baby wrapped in a white blanket.

The trio posed for photographers before going back inside.

The royals emerged a few minutes later with their infant in a carrier and got into a waiting car.

The newborn prince's elder siblings, Prince George and Princess Charlotte, already had gone home after a brief first meeting with their baby brother.

Earlier, Kensington Palace confirmed that both mother and baby were doing well, and that Prince William was there for the birth.

Kate arrived Monday morning in "the early stages of labor" at St. Mary's Hospital in London and was admitted to the Lindo Wing, where she had already given birth twice. She and William arrived together by car.

The new prince officially arrived at 11:01 a.m. local time (6:01 a.m. Eastern) and weighed in at eight pounds, seven ounces. His name was not immediately announced.

Known simply as Kate Middleton before her royal life began, the Duchess announced she was pregnant with her third child after missing a royal engagement in September. As with her other two pregnancies, she suffered from hyperemesis gravidarum, or acute morning sickness.

The couple's second child, Princess Charlotte, began attending nursery school in London in January at the age of two. She turns three in May. Her big brother Prince George is four and began school in September last year.

Monday was already special in the U.K.; April 23 is St. George's Day, which honors the patron saint of England. Kate spent about 10 hours in labor with Prince George, but her second child, Princess Charlotte, was delivered after less than three hours.

CBS News correspondent Roxana Saberi reports that, like all royal babies, the new addition to the family can expect to melt hearts and make headlines when first seen by the public on the steps of the Lindo Wing. But after that, he won't likely be seen very often; William and Kate have closely guarded their children's privacy.

As has been the custom since the middle of the 19th century, the official birth announcement was placed on an ornate easel outside Buckingham Palace shortly after the new prince came into the world on Monday. In a far-less time-honored tradition, however, his birth was first announced by the duke and duchess's official residence, Kensington Palace, via Twitter.

The British royal family is set for a big year, with Prince William's brother Prince Harry set to marry American actress Meghan Markle on May 19 at Windsor Castle, outside London.