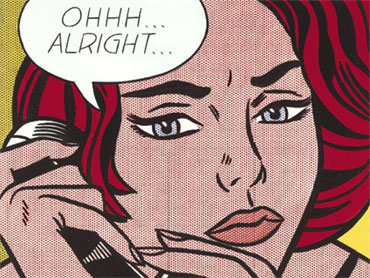 In life, Roy Lichtenstein was one of the biggest names in pop art. Now, more than a decade after his death, his paintings still get double takes. Here's Erin Moriarty of "48 Hours":

Whimsical paintings based on cartoons … witty sculptures … prints that remind us of famous paintings, with a commercial twist.

Images so familiar to us today it's nearly impossible to believe that they were once considered quite shocking.

So shocking that in 1964 Life Magazine wondered if the artist who created them, Roy Lichtenstein, was quite possibly the worst artist in the U.S.

That's not a question anymore.

When the dust settled at Christies' auction house last November, one of Lichtenstein's pieces named "Ohhh...Alright..."did more than "all right": It sold for nearly $43 million.

A record, beating out even Warhol's Campbell's soup can.

Lichtenstein himself would find that shocking.

"He used to say that he was amazed that people would actually pay for what he called 'used canvases,'" said Mitchell Lichtenstein, Roy's youngest son.

But, in fact, Roy Lichtenstein may be more popular today than ever, says his youngest son, Mitchell, who walked us through the sculpture garden on the roof of his father's old N.Y. studio, pointing to one piece Mitchell's mother had called "her giant Chia Pet."

"I think people appreciate his humor," Mitchell said, "and I think they see more in it as time goes by."

Mitchell, an actor and movie director, admits he didn't always appreciate his father's work, either.

"Kids talked about what their father did," he told Moriarty, "and I thought, 'Well, my father doesn't really have a job!'" And it was weird to say 'artist' because that wasn't a really a job."

Which also meant he was around more often than a lot of dads!

"There was always something fun to do in the studio," Mitchell recalled.

Mitchell says his father worked every day, stopping for lunch promptly at 1, and never suffered for his art.

"He didn't have demons that kept him from working, like many artists. He just loved what he did and felt very grateful to be able to do," he said.

When Lichtenstein burst onto the New York scene back in the early 1960s, tough guy abstract expressionists like Willem de Kooning and Jackson Pollock, splattering their emotions all over the canvas, were the rage.

Lichtenstein replaced their heat with cool.

"Those who had a negative reaction to his art, their main argument was, 'This is not art,'" said Isabelle Dervaux, curator of an exhibit of Lichtenstein's early drawings, which originated at the Morgan Library in New York this fall, and moves to Vienna, Austria at the end of the month.

She says that Lichtenstein, along with artists Robert Rauschenberg and Andy Warhol, turned images from popular culture into art. Its name: "Pop art."

"Throughout the art history, when an artist brings something so radically new, some people don't see it," Dervaux said.

Well, taking a look at some of Lichtenstein's earliest work, you can see their point. A couch? A BB gun? Not traditional subjects for art.

"There's different levels of humor," Mitchell Lichtenstein said. "There's the humor of just making a Donald Duck, or a Mickey Mouse, and lifting it into another realm of art."

Take his very simple drawing of a hand tracing the outline of a foot, inspired (says Dervaux) by a diagram from a mail order catalogue for shoes. "It's a very practical kind of drawing."

"And nobody thinks of that as 'art,'" said Moriarty.

Lichtenstein's work became more complex over the years, says his son, as he continued to question how we see the world.

For example, says Mitchell, why would we accept two simple lines - which could be a parenthesis and an apostrophe - as a nose?

While his art today is worth millions, you don't have to have a lot of money to appreciate it.

There are Lichtensteins at the airport in Columbus, Ohio . . . in Miami . . . and beneath Times Square, in the subway of New York. All you have to do is look up.

The mural right below 42nd Street was a gift from Roy Lichtenstein to the city's Arts for Transit program.

"Do you know how many times I've walked by this and never really thought about it?" said Moriarty.

"You're always just trying to not bump into people and get to your destination," said Mitchell.

So like his father, says Mitchell, to use clean futuristic images to gently poke fun at the swirling chaos below.

"I think people see the joy that is really behind his work," he said. "I think you feel his humanity, his humor and his kindness in his work, and people really respond to that, I think."

"Do you notice that whenever you talk about your father or your father's work, you just smile? You naturally smile?" Moriarty said.

"It makes me smile," he said. "I think it makes people smile."