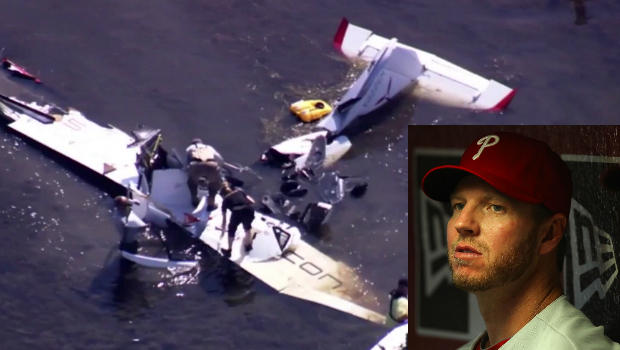 LOS ANGELES -- The tiny sport plane Roy Halladay was flying when he fatally crashed into the Gulf of Mexico was made for entry-level pilots like him, though the plane's chief designer and test pilot died while flying one earlier this year, officials and experts said.

Halladay, the 40-year-old former Blue Jays and Phillies pitcher, had been the proud owner for less than a month of his ICON A5, and was among the first to fly it, with only about 20 in existence, according to the website for ICON Aviation.

In one of many enthusiastic tweets about the plane, Halladay said it felt "like flying a fighter jet," as seen in this Oct. 31 tweet:

Noreen Price from the NTSB said during a press briefing Wednesday afternoon that at 12:06 p.m. the aircraft had a "high-energy impact" into water and confirmed that there was only one person aboard the aircraft.

The airplane was recovered and moved to a secure facility for further review, Price mentioned. A flight recorder was recovered and will be analyzed. The official said there was no voice recording and no may day call was made prior to the crash.

The official said a timeline of events leading up to the crash is being developed and mentioned that Wednesday is the first full day NTSB has been on scene. "Our mission is to not just find out what happened, but why it happened," Price said.

NTSB urged anyone with any videos or pictures to submit them electronically.

The investigation could take up to two years.

Rolled out in 2014, the A5 is an amphibious aircraft meant to be treated like an ATV, a piece of weekend recreational gear with folding wings that can easily be towed on a trailer to a lake where it can take off from the water.

"The way that a lot of people described it is a Jet Ski with wings," Stephen Pope, editor-in-chief of Flying magazine, told The Associated Press. "It's really a play thing."

The man who led the plane's design, 55-year-old John Murray Karkow, died while flying an A5 over California's Lake Berryessa on May 8, in a crash the National Transportation Safety Board blamed on pilot error. The NTSB also will investigate Halladay's crash to determine the cause.

Meanwhile, Halladay's love of flying was evident on social media said he had dreamed about owning one of the planes, and said in video on the company's website that he had to talk his wife into letting him get one. The son of a corporate pilot, Halladay had been forbidden to take up aviation until he retired from baseball at the end of 2013.

Halladay said in a tweet in October that "real life" was better than his dreams.

Pope, the editor-in-chief of Flying magazine, said "the plane itself is great," but he had concerns about Halladay, a new pilot with little flying time, taking the craft out over water at low altitude, though the plane was marketed as a craft that could do that.

"They still think that that's the way the airplane should be flown, and there are people in aviation who completely disagree with that," Pope said. "They think you should not have a low-time pilot flying low over water. That's a recipe for disaster."

Low flying was part of the problem when Karkow, the designer, crashed, according to federal investigators. Karkow was killed along with passenger Cagri Sever, the company's newly hired director of engineering.

The NTSB blamed pilot error for the crash, saying Karkow mistakenly entered a canyon while flying too low, causing the plane to strike the canyon wall.

Another A5 crashed in April, making a hard landing in the water off Key Largo, Florida, injuring the pilot and his passenger. The pilot told investigators the plane descended faster than he expected.

Halladay's ICON A5 went down around noon Tuesday off the coast of Florida, Pasco County Sheriff Chris Nocco said.

The sheriff's office marine unit responded and discovered Halladay's body in shallow water near some mangroves. No survivors were found.

Police said they didn't know where the aircraft was headed.

ICON Aviation said in a statement that the company would assist the NTSB in every way possible with its investigation, and that its executives and employees were "devastated" by Halladay's death.

"We have gotten to know Roy and his family in recent months, and he was a great advocate and friend of ours," the statement said.

Meanwhile, an outpouring of condolences flooded social media Tuesday, including a statement from Major League Baseball.

"On behalf of Major League Baseball, I extend my deepest condolences to his family," MLB Commissioner Rob Manfred said.

The Philadelphia Phillies issued a statement saying the club is "numb over the very tragic news" of Halladay's "untimely death."

"There are no words to describe the sadness that the entire Phillies family is feeling over the loss of one of the most respected human beings to ever play the game. It is with the heaviest of hearts that we pass along our condolences to Brandy, Ryan and Braden," the statement said.

Ryan Howard, former Phillies player and current first baseman of the Colorado Rockies, tweeted: "Such a sad day. We lost a great ball player but an even better human being. Many prayers to Brandy, Ryan, & Brayden. We will miss you Roy."

Halladay was a former eight-time All-Star and two-time Cy Young Award winner. He pitched for the Toronto Blue Jays from 1998 to 2009 and played with the Philadelphia Phillies from 2010-2013.

Halladay was also nominated for the Roberto Clemente Award thanks to his work with underprivileged children, CBS Sports writes.

Halladay is survived by a wife and two sons.