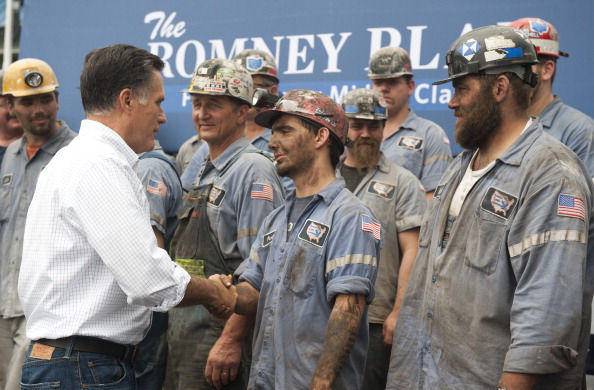 In a 2007 interview on HBO's Real Time With Bill Maher, Biden, then a 2008 presidential candidate, was asked which is more likely to contribute to Americans' deaths - air pollution from coal, high-fructose corn syrup or a terrorist attack. Biden responded: "Air that has too much coal in it, corn syrup next, then a terrorist attack. But that is not in any way to diminish the fact that a terrorist attack is real. It is not an existential threat to bringing down the country, but it does have the capacity, still, to kill thousands of people. But hundreds of thousands of people die and their lives are shortened because of coal plants, coal-fired plants and because of corn syrup."

Addressing a crowd in Beallsville, Romney attacked President Obama's energy policies and added, "His vice president said coal is more dangerous than terrorists. Can you imagine that? This tells you precisely what he actually feels and what he's done and his policies over the last three and a half years have put in place the very vision he had when he was running for office."

The video of Biden's comment has made the rounds of conservative blogs and websites for years. Republicans have repeatedly accused Obama of waging a "war on coal," pointing to declines in its usage, while administration officials say economics are to blame: The Environmental Protection Agency has been devising court-mandated rules on air pollution at a time when low natural-gas prices are pushing out coal-generated electricity.

Romney also took issue with a claim that the Obama administration is committed to coal and sought to eliminate any suspicion - fueled by a 2003 statement opposing a Massachusetts coal plant in which he declared that he would not "create jobs that kill people" - that he is against coal.

Under questioning from reporters, Romney senior adviser Kevin Madden said Romney hasn't changed his position on coal over the years. He said Romney's opposition to the Massachusetts plant stemmed from concerns over its safety.

"Any time you're dealing with any sort of energy exploration, safety is important - no change in that," Madden said.