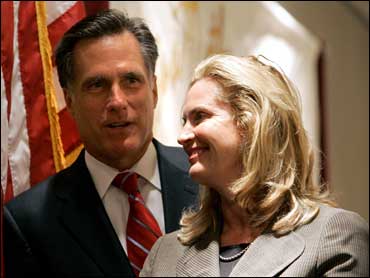 By The Politico's Mike Allen.

The Monday morning blast e-mail to radio talk show hosts was headed, "Can Mitt Romney Serve Two Masters? The Mormon Church vs. the United States of America." It went on for eight pages, with color photos, about "secret names and many other bizarre proceedings" of the Church of Jesus Christ of Latter-day Saints.

A series of sensational "Mormons believe" bullet points concluded: "If Mitt Romney does not follow what the prophet of the Mormon Church dictates, he will be an apostate."

The e-mail was offering guest appearances by Tricia Erickson, who was described as heading a modeling agency when she represented Fawn Hall (of Iran-contra fame) and Donna Rice (who derailed Gary Hart's presidential campaign) but who now bills herself as a crisis-management expert.

She also claims to have been raised in the Mormon Church before deprogramming herself and tells bookers she can help their listeners "make an informed judgment about whether Mitt Romney should be the president."

Erickson is a fringe figure who is not likely to be embraced by Romney's GOP rivals or taken seriously by mainstream journalists. But that does not mean Erickson and her online pamphleteering are not serious concerns of the former Massachusetts governor in his 2008 presidential bid.

As Romney tries to capitalize on a polished performance in the Republican presidential debates, questions about his religion and its political implications remain a fundamental challenge for his campaign.
The campaign is emphasizing Romney's faith and downplaying his specific religion. Romney press secretary Kevin Madden said: "Governor Romney is running for commander in chief, not chief theologian."

It reported an unfavorable impression of Latter-day Saints in a two-year study of 1,269 social science and humanities faculty members by the Institute for Jewish & Community Research. In several polls, a third or more of registered voters have said they would not vote for a member of the church.

In Spartanburg, S.C., an hour from the debate site, the Herald-Journal reported last week in an article headlined "Critics Target Romney's Mormonism" that a wave of anti-Mormon literature had poured into South Carolina mailboxes ahead of the debate.

The paper said the "eight-page diatribe," which does not mention Romney but is a clear attack on him, is titled, "Mormons in Contemporary American Society: A Politically Dangerous Religion?" The Herald-Journal could not discover who had paid for or mailed the brochures, which had no return address and were postmarked Providence, R.I.

Romney told MSNBC he considered it "an extraordinarily bigoted kind of statement" and added, "As I go around the country, the overwhelming majority of people I meet welcome a person of faith. They want a person of faith to lead the country." Later, campaigning in Ames, Iowa, Romney was even sharper, declaring Sharpton's comment "un-American."

The Romney campaign has been closely watching the other Republican candidates for any sign of anti-Mormon innuendo, and it plans to respond with similar overwhelming force if one of Romney's opponents is caught in a slur on his faith.

In a telephone interview, Erickson said she is Republican and supports one of the lesser-known candidates, Rep. Duncan Hunter, R-Calif., but did not discuss her flier with his campaign. She said she sent her offer to a media list of hundreds of newspapers and radio and television stations. "I'm not biased — I'm knowledgeable," she said.

The Church of Jesus Christ of Latter-day Saints recognizes the educational job it faces. The current lead item on the church's website provides links bolstering an affirmative answer to the question, "Are Mormons Christians?"

It sounds like a basic question, but some evangelical voters in South Carolina and other Southern states have been taught that the answer is "no."

Church officials are not backing Romney's candidacy, pointing to the church's policy against taking stands in political campaigns or allowing candidates to use church property or other resources.

Richard Bushman, a professor emeritus of history at Columbia University who is both a devout Mormon and a religious scholar respected in secular academia, says conservative Christians — one of the most important blocs of early Republican voters — should be natural allies for Romney.

Several evangelical leaders have said Romney's Mormonism should not be disqualifying, and his campaign has been doing personal visits to key pastors and denominational leaders.

Bushman said it's not yet clear whether Romney will be able to resolve doubts about the influence his faith would have on his government, as John F. Kennedy did with his Roman Catholicism.

Romney's campaign has indicated he's likely to give a major speech to serve as a counterpart to Kennedy's 1960 address to the Greater Houston Ministerial Association, in which he declared:

Can Romney overcome doubts about his faith? "I think it's going to depend heavily on his personality and character: Can he sell himself and his views?" Bushman said. "He's a very winning person. I think he's going to win over a lot of wavering middle people, including some evangelical friends who'll say, 'Look, this is a godly man. He's a faithful family man. He believes in good values. Why not?' Then there's going to be the suspicion factor from many others that will simply exclude him."

An indication of the tough questions ahead for Romney came this week at a conference for national religion and political reporters in Florida, where Bushman spent an afternoon answering pointed questions at a forum sponsored by the Pew Forum on Religion & Public Life.

One of them was whether Romney's candidacy could wind up being a public relations disaster for his church.

"If it compels people to think not just about these horror stories they hear about Mormons but compare it to Mormons they know, they will begin to realize Mormonism is something different than is depicted in those extreme examples," Bushman said.

"I don't think there's any other way to do it except to know a lot of Mormon people and how they live their lives."
By Mike Allen
TM & © 2007 The Politico & Politico.com, a division of Allbritton Communications Company