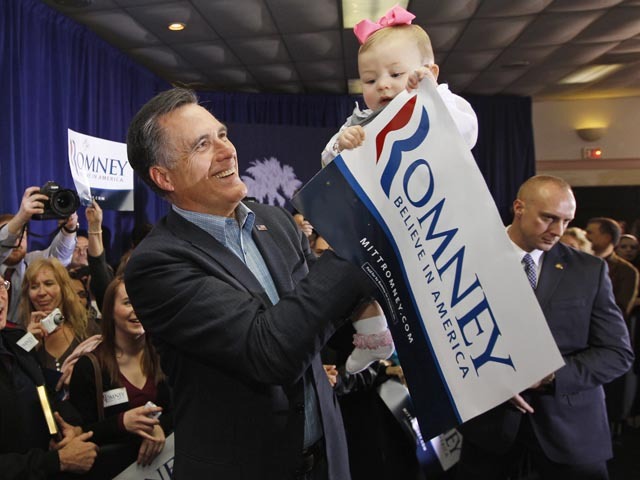 Republican presidential front-runner Mitt Romney acknowledged Tuesday that he pays an income tax rate close to 15 percent, the same rate that billionaire investor Warren Buffett has decried as lower than that paid by most middle-class Americans.

Asked a press conference what rate he pays, Romney responded, "What's the effective rate I've been paying? It's probably closer to the 15 percent rate than anything. Because my last 10 years, my income comes overwhelmingly from some investments made in the past, rather than ordinary income or rather than earned annual income. I got a little bit of income from my book, but I gave that all away. And then I get speakers fees from time to time, but not very much."*

Romney earned more than $300,000 in speaking fees in the twelve months through February 2011, according to financial disclosure statement filed to the government by his campaign. While that income would be taxed at a 35 percent rate, minus deductions, he suggested it is a fraction of his overall income.

Romney, who in August disclosed to the Federal Election Commission a net worth of between $190 and $250 million, in effect confirmed that, like many wealthy investors, he earns the bulk of his income from his investments. Dividends and capitol gains are taxed at a relatively low 15 percent rate. Romney said at Monday's Republican presidential debate that he would"probably" release his tax returns in April, though he would not promise to do so.

President Obama has sought to increase the tax rate for wealthy investors, and cleverly named his proposal to do so "the Buffett rule," after the famed investor from Omaha, Nebraska. Mr. Obama wants to make sure that no household making more than $1 million annually pays a lower rate than middle class Americans.

In a high-profile op-ed in the New York Times in August, Buffett complained that the tax system is so dysfunctional that he ended up paying a lower tax rate than the salaried workers at his firm and urged Congress to "stop coddling the super-rich."

Buffett wrote, "Some of us are investment managers who earn billions from our daily labors but are allowed to classify our income as "carried interest," thereby getting a bargain 15 percent tax rate. ... These and other blessings are showered upon us by legislators in Washington who feel compelled to protect us, much as if we were spotted owls or some other endangered species. It's nice to have friends in high places."

Romney has spoken out against Obama's plan to raise taxes for the wealthiest Americans, saying in August, "Right now we need job creators to use their capital to start new businesses, to put people to work, and the last thing I want to do is to take money away from entrepreneurs and innovators, small business people."

Democrats are already jumping on Romney's acknowledgement concerning his tax rate. Priorities USA Action, a Democratic super PAC, emailed reporters a web video it made previously spotlighting the issue on Tuesday. The video spotlights what it calls "The Romney Rule," which it defines as "millionaires like him are entitled to pay taxes at a lower rate than teachers, cops or construction workers."

Former House Speaker Newt Gingrich, who is also seeking the GOP presidential nomination, responded to Romney's comments on Tuesday by saying, "he ought to release his taxes so we can find out whether or not it was really 15 percent."

"And second I think we ought to rename our flat tax," he continued, referencing his own optional flat tax proposal. "We have a 15 percent flat tax so this would be the Mitt Romney flat tax that all Americans could then pay the rate that Mitt Romney paid. I think that's terrific."

"Release all of your income tax and then the people of America can do the calculations I think rather speedily and figure out what it is and make an appropriate conclusion," he said.

In response to Gingrich's comments, Romney spokesperson Andrea Saul commented: "President Obama and Speaker Gingrich are once again reading from the same talking points. Neither Obama nor Gingrich understand how the real economy works and their desperate distractions from that fact aren't going to work."

*Correction: Romney's quote had been changed after an error in the original transcription.