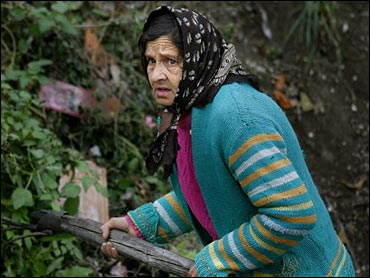 The name of this remote Romanian village means "mud," and that's exactly what angry locals are throwing back at comedian Sacha Baron Cohen.

Cohen used Glod's Gypsies as stand-ins for Kazakhs in his runaway hit movie, "Borat: Cultural Learnings of America for Make Benefit Glorious Nation of Kazakhstan." But offended villagers are threatening to sue the film's producers for paying them a pittance to put farm animals in their homes and perform other crude antics.

Residents and local officials in the scruffy hamlet 85 miles northwest of Bucharest said Tuesday they were horrified and humiliated to learn their abject poverty and simple ways are ridiculed in a movie, which has raked in $67 million at box offices in the United States alone in just two weeks.

"We thought they came here to help us — not mock us," said Dana Luca, 40, sweeping a manure-stained street lined with shabby homes of crumbling brick and corrugated iron sheeting.

"We haven't got anything here. We haven't got running water. We can't even bathe," she said. "We are poor people, but we are still people."

Nicolae Staicu, leader of the 1,670 Gypsies, or Roma, who eke out a living in one of the most impoverished corners of Romania, said he and other officials would meet with a public ombudsman on Wednesday to map out a legal strategy against Cohen and "Borat" distributor 20th Century Fox. The film's opening sequence showing Borat's hometown in Kazakhstan is shot in Glod.

Staicu accused the producers of paying locals just $3.30 to $5.50, misleading the village into thinking the movie would be a documentary, refusing to sign proper filming contracts and enticing easily exploited peasants into performing crass acts.

Only five villagers have jobs at a nearby sanatorium and a stone quarry, Staicu said. The rest weave baskets, grow apples, pears and plums, gather mushrooms in the dense Carpathian Mountain forests rising above the town, or raise a few scrawny chickens.

With no gas heating or indoor plumbing, most keep warm with wood stoves and drink from wells. Horse-drawn carts far outnumber automobiles on unpaved, badly potholed roads, and mangy stray dogs growl and snap at strangers.

Acrid fires smolder in trash piled up on the outskirts of the village, and children — their clothing worn and torn — play in yards littered with stumps, scrap metal and other bric-a-brac.

"These people are poor and they were tricked by people more intelligent than us," he said.

The mood in Glod, meanwhile, was tense and volatile, with crowds of angry, shouting villagers repeatedly gathering around reporters.

One man was seen slapping his sister, who had appeared in the film, and slamming the gate to his ramshackle home shut to keep her from being interviewed. At another point, a resident threatened news photographers with a stick, and another pelted their car with rocks.

People in the former Soviet republic of Kazakhstan also have decried how they are depicted in the film. Cohen's character is a Kazakh TV journalist on an adventure across America.

Two members of a fraternity at a South Carolina university who appear making drunken, insulting comments about women and minorities also are suing 20th Century Fox and three production companies, claiming the crew got them drunk in a bar before filming and told them the movie would not be shown in the United States.

Not everyone in Glod is upset. Sorina Luca, 25, excitedly described how she was given $3.30 to bring a pig into her home and let the producers put a toy rifle into the hands of her 5-year-old daughter for one scene.

"I really liked it," she said. "We are poor and miserable. Nothing ever happens here."