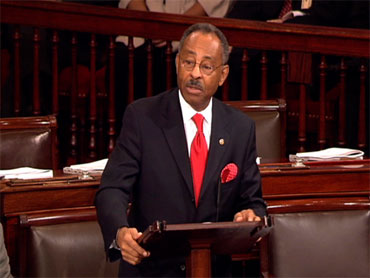 Sen. Roland Burris' appointment by a disgraced governor made him an oddity and something of an outcast in Washington. But on Thursday he said that his time in the U.S. Senate, however short, was a "towering testament" to the American Dream.

Delivering a farewell speech on the Senate floor, Burris said he was proud of what he accomplished in just under two years in Washington.

"Together we have achieved passage of the most ambitious legislative agenda since the Great Depression," Burris said. He called his time in the Senate "the honor of my lifetime."

Burris cited more than 60 bills he sponsored and 300 others he co-sponsored during his time in office. He said he was particularly proud of his work on President Barack Obama's healthcare overhaul and increasing funding for Pell Grants.

The Democrat was appointed to the seat by former Illinois Gov. Rod Blagojevich. Burris will make way for Republican Rep. Mark Kirk, who won an election to fill the remainder of Burris' term and a full six-year term on Election Day. Kirk will be sworn in after Thanksgiving.

Burris is the Senate's only black member and when he leaves, there will be none - a fact Burris said was painful to him. He used much of his speech to call for more diversity in government.

The great-grandson of a slave, Burris said his time in the Senate was "a remarkable testament to our nation's ability to correct the wrongs of generations past," but also said that is departure is a "solemn reminder of how far we have to go."

"I am today the only black American member of this Senate ... when the one 112th Congress is sworn in this coming January, there will not be a single black American who takes the oath of office in this chamber. This is simply unacceptable."

Burris has not announced what he plans to do after leaving office, but is expected to return to Illinois.