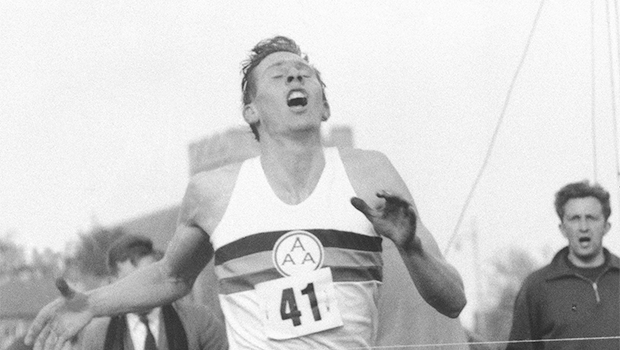 LONDON -- Roger Bannister, the first runner to break the 4-minute barrier in the mile, has died. He was 88. Bannister's family said in a statement that he died peacefully on Saturday in Oxford, the English city where the runner cracked the feat many had thought humanly impossible on a windy afternoon in 1954.

Bannister, who went on to pursue a long and distinguished medical career, had been slowed by Parkinson's disease in recent years.

He was "surrounded by his family who were as loved by him, as he was loved by them," the family said in a statement announcing his death on Sunday. "He banked his treasure in the hearts of his friends."

British Prime Minister Theresa May remembered Bannister as a "British sporting icon whose achievements were an inspiration to us all. He will be greatly missed."

Helped by two pacemakers, Bannister clocked 3 minutes, 59.4 seconds over four laps at Oxford's Iffley Road track on May 6, 1954, to break the 4-minute mile -- a test of speed and endurance that stands as one of the defining sporting achievements of the 20th century.

"It's amazing that more people have climbed Mount Everest than have broken the 4-minute mile," Bannister said in an interview with The Associated Press in 2012.

The enduring image of the lanky Oxford medical student -- head tilted back, eyes closed and mouth agape as he strained across the finishing tape -- captured the public's imagination, made him a global celebrity and lifted the spirits of Britons still suffering through postwar austerity.

"It became a symbol of attempting a challenge in the physical world of something hitherto thought impossible," Bannister said as he approached the 50th anniversary of the feat. "I'd like to see it as a metaphor not only for sport, but for life and seeking challenges."

Bannister talked to CBS' "Sunday Morning" in 2004 -- 50 years after his incredible feat:

He might not have set the milestone but for the disappointment of finishing without a medal in the 1,500 meters, known as the metric mile, in the 1952 Olympics in Helsinki. Instead of retiring from the sport, he decided to chase the 4-minute mark.

Swedish runner Gundar Haegg's mile time of 4:01.4 had stood for nine years, but in 1954 Bannister, Australian rival John Landy and others were threatening to break it.

"As it became clear that somebody was going to do it, I felt that I would prefer it to be me," Bannister told the AP.

He also wanted to deliver something special for his country.

"I thought it would be right for Britain to try to get this," Bannister said. "There was a feeling of patriotism. Our new queen had been crowned the year before, Everest had been climbed in 1953. Although I tried in 1953, I broke the British record, but not the 4-minute mile, and so everything was ready in 1954."

His chance finally came on a wet, cool, blustery May afternoon during a meet between Oxford and the Amateur Athletic Association.

When Bannister looked up at the English flag whipping in the wind atop a nearby church, he feared he would have to call off the record attempt. But, shortly before 6 p.m., the wind died down. The race was on.

With 250 yards to go, Bannister surged past Chataway, his long arms and legs pumping and his lungs gasping for oxygen.

"The world seemed to stand still, or did not exist," he wrote in his book, "The First Four Minutes."

"The only reality was the next 200 yards of track under my feet. The tape meant finality -- extinction perhaps. I felt at that moment that it was my chance to do one thing supremely well. I drove on, impelled by a combination of fear and pride."

After Bannister crossed the finish line, the announcer read out the time: "3..." The rest was drowned out by the roar of the crowd.

The record lasted just 46 days, as Landy ran 3:57.9 in Turku, Finland, on June 21, 1954. That set the stage for the showdown between Bannister and Landy at the Empire Games, now called the Commonwealth Games, in Vancouver, British Columbia on Aug. 9, 1954.

Landy set a fast pace, leading by as much as 15 yards before Bannister caught up as the bell rang for the final lap.

"Around the last bend, I think the crowd was making so much noise he couldn't hear whether I was behind, or whether he'd dropped me, and he looked over his left shoulder, and I passed him on his right shoulder," Bannister said.

Bannister considered that victory even more satisfying than the first 4-minute mile because it came in a competitive race against his greatest rival.

Bannister capped his brilliant summer of 1954 by winning the 1,500 meters at the European Championships in Bern, Switzerland, in a games record of 3:43.8.

Bannister, who was chosen as Sports Illustrated's first Sportsman of the Year in 1954, retired from competition and pursued a full-time career in neurology. As chairman of the Sports Council between 1971 and 1974, he developed the first test for anabolic steroids.

"None of my athletics was the greatest achievement," he said. "My medical work has been my achievement and my family with 14 grandchildren. Those are real achievements."

IAAF President Sebastian Coe said Bannister's death represented a "day of intense sadness both for our nation and for all of us in athletics."

"There is not a single athlete of my generation who was not inspired by Roger and his achievements both on and off the track," Coe tweeted.

Bannister also served as master of Oxford's Pembroke College from 1985-93.

Bannister married Moyra Jacobsson, an artist, in 1955. They had two sons and two daughters and lived in a modest home only minutes away from the track where he made history.

Bannister outlived his 4-minute mile pacemakers: Brasher, who founded the London Marathon, died in 2003 at the age of 74. Chataway died in 2014 at 82.