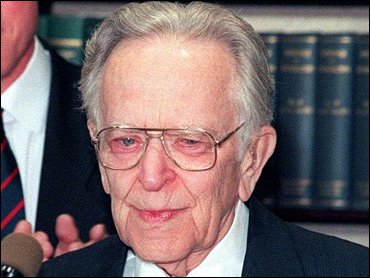 As lawyers and court watchers have long suspected, the Supreme Court was ready to effectively overturn the landmark Roe v. Wade ruling legalizing abortion in 1992, but Justice Anthony M. Kennedy got cold feet, and the vote went the other way.

Internal notes in the papers of late Justice Harry A. Blackmun reveal the secretive dealings that led to the court's ruling in Planned Parenthood v. Casey that year.

Blackmun's extensive records from 24 years on the court became open to the public March 4.

Details of the archives were first released by NPR's Nina Totenberg, who got advance access.

Unbeknownst to Rehnquist, Kennedy was having second thoughts, and agreed with Justices Sandra Day O'Connor and David Souter, to a compromise position.

The Casey ruling carved out a middle ground that upheld a woman's right to abortion largely free from state regulation.

The case was argued in April and Rehnquist was at work on his majority ruling, when Kennedy sent a note to Blackmun, NPR reported.

"I need to see you as soon as you have a few moments. I want to tell you about a new development in Planned Parenthood v. Casey. It should come as welcome news."

Blackmun had written the Roe ruling 18 years before, and had guarded it from previous attack from conservative justices.

"The detriment that the State would impose upon the pregnant woman by denying this choice altogether is apparent. Specific and direct harm medically diagnosable even in early pregnancy may be involved. Maternity, or additional offspring, may force upon the woman a distressful life and future. Psychological harm may be imminent. Mental and physical health may be taxed by child care," Blackmun wrote in the Roe decision, which involved a Texas law. "There is also the distress, for all concerned, associated with the unwanted child, and there is the problem of bringing a child into a family already unable, psychologically and otherwise, to care for it."

Later in the decision, he wrote: "In view of all this, we do not agree that, by adopting one theory of life, Texas may override the rights of the pregnant woman that are at stake."

The Casey case, named after then-Pennsylvania Gov. Robert Casey, an anti-abortion rights Democrat, concerned restrictions on abortion, like requiring a waiting period and the notification of husbands or parents.

The ruling created an "undue burden" standard to evaluate restrictions on abortion, saying a restriction is acceptable unless "its purpose or effect is to place substantial obstacles in the path of a woman seeking an abortion before the fetus attains viability."

The ruling tossed out the husband notification law, but did not rule against the waiting period or parental notification for minors.

Blackmun's paper legacy, filling more than 1,500 boxes, will be unsealed Thursday on the fifth anniversary of his death.

It's been more than a decade since intimate details of the court's inner workings were revealed in Justice Thurgood Marshall's papers, which elicited bitter criticism within the court because the papers include secret memos and unpublished draft opinions in controversial cases.

Most current justices are expected to ensure their files and any embarrassing secrets they might hold will be protected long after their deaths.

Blackmun, like Marshall, served 24 years on the court and into his 80s, retiring in 1994. He accumulated far more correspondence than Marshall.

The appointee of President Nixon "took copious notes and never threw away any of his papers," Washington lawyer David Frederick said.

His authorship of Roe v. Wade brought him more than 60,000 angry letters and repeated threats on his life.

Blackmun, who died at age 90, served with eight of the current nine justices. Stephen Breyer was chosen as his successor in 1994.

Blackmun also donated his papers to the Library of Congress, more than 530,000 items, with a release date five years after his death.