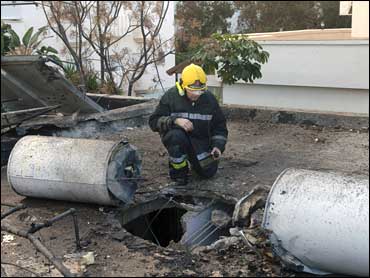 Lebanese militants fired at least three rockets into northern Israel early Thursday, threatening to open a second front for the Jewish state as it pushed forward with its offensive in the Gaza Strip. Gaza militants fired a rocket barrage into southern Israel almost simultaneously.

There were no serious injuries in either attack. But the rockets on Israel's north raised the specter of renewed hostilities with Hezbollah, just 2 1/2 years after Israel battled the guerrilla group to a 34-day stalemate. Hezbollah started the 2006 war as Israel was battling Palestinian militants in Gaza.

Lebanon's government said Thursday it was trying to determine who fired the rockets from southern Lebanon into Israel and stressed that it remains committed to peace.

No group immediately claimed responsibility for the rocket firing. The militant group Hezbollah had no immediate comment, and its TV station only carried the reports of the exchange without any commentary.

CBS News correspondent Robert Berger reports that a Palestinian splinter group is suspected of being behind the rocket fire. The group is not directly linked to Hezbollah and was believed to have been acting independently. The rockets used in the attack were older and not typical of Hezbollah's arsenal, added Berger.

A Lebanese government official said the government was investigating the rocket firing and was in consultation with the U.N. peacekeeping force in southern Lebanon, which oversees a truce since the 2006 war, to determine who had fired the rockets into northern Israel.

Meanwhile, Israel said it had suspended its Gaza military operation for three hours to allow in humanitarian supplies.

But a U.N. official in the Gaza Strip said Israeli forces fired on a truck on a U.N. aid mission and killed the driver during that three-hour window Thursday.

U.N. spokesman Adnan Abu Hasna said the U.N. coordinated the delivery with Israel, and the vehicle and was marked with a U.N. flag and insignia when it was shot in northern Gaza.

The Israeli army said it was investigating.

In new fighting Thursday, Israel killed at eight people, including five militants, raising the death toll from its 13-day offensive to 696 people, according to Palestinian medical officials.

Israel has repeatedly said it was prepared for a possible attack on the north since it launched its bruising campaign against Hamas militants in Gaza on Dec. 27. Israel has mobilized thousands of reserve troops for such a scenario, and leaders have warned Hezbollah of dire consequences if it enters the fighting.

Shortly after the rockets fell around the town of Nahariya, 5 miles south of the Lebanese border, Lebanese TV stations reported Israeli mortar fire on open areas in southern Lebanon. The Israeli military confirmed it carried out "pinpoint fire" in response without elaborating.

Television news video showed a hole in the roof of a nursing home in Nahariya where one of the rockets apparently struck, causing serious damage to the building but no injuries.

Despite the heavy fighting, there were apparent strides on the diplomatic front with the U.S. throwing its weight behind a deal being brokered by France and Egypt.

(AP/ESRI/United Nations)
Israeli air strikes killed 29 Palestinians on Wednesday after leaflets were dropped warning residents to leave the area "because Hamas uses your houses to hide and smuggle military weapons."

Ten Israelis have been killed, including three civilians, since the offensive began.

Thousands of Palestinians have fled their homes, seeking refugee at U.N. schools turned into temporary shelters.

The fury of the renewed fighting made it appear each side was scrambling to get in as many hits as possible before a truce could materialize.

"I feel like the ground is shaking when we hear the shelling. People are terrified," said Fida Kishta, a resident of the Gaza-Egypt border area where Israeli planes destroyed 16 empty houses Wednesday.

In Turkey, a Mideast diplomat who spoke on condition of anonymity because he was not authorized to speak publicly said that country would be asked to put together an international force that could help keep the peace. And diplomats in New York worked on a U.N. Security Council statement backing the cease-fire initiative but failed to reach agreement on action to end the violence.

"We are very much applauding the efforts of a number of states, particularly the effort that President (Hosni) Mubarak has undertaken on behalf of Egypt," Secretary of State Condoleezza Rice said. "We're supporting that initiative."

(AP Photo/Bassem Tellawi)
In Syria, Abu Omarm, a spokesman for Hamas leader Khaled Mashaal (at left), told CBS News' George Baghdadi on Wednesday the militant group could only agree to a plan which guaranteed to end the economic blockade and to reopen the border crossings as soon as hostilities on both sides were halted; what he called a "complete package."

Israel has no direct contacts with Hamas, but Mashaal indicated earlier Wednesday for the first time an apparent willingness to "contribute in reaching a solution to stop the aggression in Gaza." (Click here to read more on this from George Baghdadi in the World Watch blog.)

The Israeli military, which has refused to allow journalists into Gaza, permitted two TV teams to accompany soldiers on patrol for the first time. The footage showed soldiers walking through a deserted street in an unidentified location in Gaza.

The Israeli military correspondent who accompanied the soldiers said they were concerned about Hamas booby-traps. He said they were shooting through walls, throwing grenades around corners, going from house to house looking for Hamas gunmen and using bomb sniffer dogs. Buildings showed bullet and shrapnel marks. "We used a lot of fire," said an officer in the group, Lt. Col. Ofer.

Growing international outrage over the human toll of Israel's offensive, which includes 3,000 Palestinians wounded - could work against continued fighting. So could President Bush's departure from office this month and a Feb. 10 election in Israel.

But Israel has a big interest in inflicting as much damage as possible on Hamas, both to stop militant rocket fire on southern Israeli towns and to diminish the group's ability to play a spoiler role in peace talks with Palestinian moderates.

The Israeli Cabinet formally decided on Wednesday to push ahead with the offensive while at the same time pursuing the cease-fire. Israeli officials also rejected Hamas' call to open the border crossings, which Israel has largely kept closed since the group seized the territory by force in June 2007.

Of the 688 Palestinians killed since Dec. 27, some 350 were civilians, among them 130 children, according to Palestinian officials.