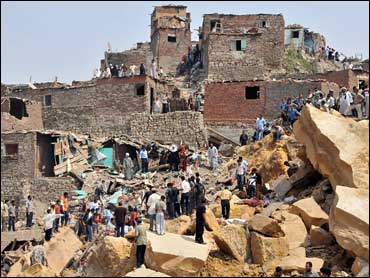 Massive boulders crashed down on an Egyptian shantytown Saturday on the outskirts of the capital, killing at least 24 people, authorities said. Rescuers were digging by hand to reach any survivors.

At least eight boulders, some the size of small houses, fell from the towering Muqattam cliffs and buried about 50 homes in the massive Manshiyet Nasr slum, one of many densely populated shantytowns ringing the city of 17 million.

The collapse occurred in the early morning, when most residents were still sleeping after waking earlier to eat ahead of the daytime fast during Islam's holy month of Ramadan.

"My whole family is underneath the rock," sobbed Anwar Ragab by phone to The Associated Press as he watched a body being pulled from under the rock. "I don't know what to do, I can't do anything - I just want my children back."

A security official said 35 people were injured and many more may be buried under the hundreds of tons of rock that fell. He spoke on condition of anonymity because he was not authorized to speak to the press.

"It was as if a knife sliced the cliff into pieces," said 27-year-old resident Sayyed Rashad.

The town was covered by a thick layer of dust and the scene was chaotic as men and women screamed in grief and blamed the government for a slow rescue operation. People tried to lift the massive rocks by hand, calling out the names of relatives and family members stuck under the debris.

Slums like Manshiyet Nasr at the base of the cliffs are built by migrants from the countryside looking for work in Cairo, which suffers from a severe housing shortage. Buildings on top of the cliffs and below are crudely built and lack basic services, contributing to the instability of the vast plateau.

"The reason the rocks keep falling is because there is no sewage system and their wastewater is eating away at the mountain," Hani Rifaat, a local journalist who has been following the issue, told AP from the site of the disaster.

Sewage could be seen pouring down from residential areas on top of the plateau, prompting fears of another collapse. 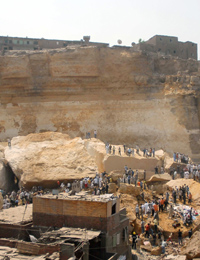 (AP Photo )
Resident Mohammed Hussein said contractors were working on shoring up the cliffs as they became increasingly unstable, but they could not complete their work until the government resettled the community below. The slum is home to half a million people, according to official government figures.

"The contractor who is stabilizing the mountain asked the government to resettle everyone at least 50 kilometers (32 miles) from the mountain because he didn't want the rocks he was removing to fall on the people," Hussein told AP Television News. "The rocks are soaked with water and so are more brittle and prone to falling."

The rock slide and the slow response comes after a string of other disasters in the country led to accusations of government neglect and incompetence. Among them, a fire that gutted the upper house of parliament in August, a fire that destroyed another Cairo slum in 2007 and a ferry disaster that claimed 1,000 lives in 2006.

Hours after the rock slide, no heavy equipment was being used to clear debris. A single bulldozer sat stranded because it couldn't move through the slum's narrow streets, forcing authorities to prepare to demolish some buildings.

In their frustration, police and residents exchanged angry words.

Workers brought in flood lights, indicating the rescue effort would continue into the night.

The government issued a statement saying survivors of the rock slide would be transferred to new housing for the night and given all necessary aid.

"We are following the case step by step and providing the care and comfort for the residents," Prime Minister Ahmed Nazif said in the statement. "We would like to remind people the danger of building informal housing in dangerous areas."

Haidar Baghdadi, the parliamentarian for the region, told Al-Jazeera news channel that buried residents were calling for help from under the rubble using cell phones.

He added that the area was known to be dangerous and the residents were supposed to be resettled to government housing. He also criticized the lack of government emergency response.

"We should have removed these rocks five years ago to protect the people underneath or moved the people," he said, blaming the Housing Ministry for the disaster.

Rock slides periodically take place on the edges of the brittle Muqattam hills outside Cairo. In 1994, some 30 people were killed in another rock slide in the same area.