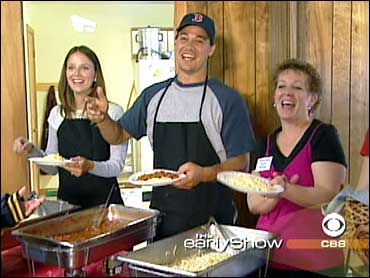 When it comes to raising money, many small towns across the country throw pasta dinners.

So, when Early Show viewer Alison Jones asked "Boston Rob" Mariano to host an event in her town, he not only showed up, he brought along his wife and fellow reality show star Amber Mariano, as well as a special, secret family spaghetti sauce recipe, for the latest installment of "Rob to the Rescue."

"Dear Rob: I am the director of youth ministry at a small rural church in Barryton, Michigan. Like most rural towns across the U.S., our kids come with little money, except for everything but the necessities. We have a state youth convention for our church denomination every May. This is an awesome convention, and the kids love to go. We do various fundraisers to help raise the money. Would you consider coming to host our Italian dinner night so the kids go to their annual state youth convention?"

The first thing Rob did when he and Amber arrived was to ask, "Where's the sauce? Take me to the sauce! The sauce is the most important part of any spaghetti dinner."

And cook it, he and Amber did.

The dinner drew about 100 people last year, but this time around, with the draw of Rob and Amber, Alison was expecting 500. Barryton only has some 400 residents.

Yet, says, Rob, "I think the dinner was a huge success. We had over 1,000 people show up and have my grandma's sauce, and they doubled their expectations on how much money they wanted to make," to the trune of roughly $4,000.

Rob and Amber had trouble cooking the macaroni quickly enough to keep up with demand, but it all worked out. Some people waited in line for nearly two hours for a plate of pasta and a photo of the couple.

With eight burners boiling pasta, it still wasn't enough to keep up with crowds. Rob felt the church cook was making matters worse by reusing the boiled water. The heavily -starched water, according to Rob, was taking even longer to boil, and several arguments about how to cook spaghetti broke out in the church kitchen.

All's well that ended well though, and all for a good cause.

Generously coat the bottom of a deep sauce pan with olive oil. Turn heat up to high and add a pressed and separated garlic clove. Add green pepper, red pepper, onion, and a dash of salt and pepper. After five minutes, add half a can of tomato paste (most people wait until the end of the recipe to add paste, but Grandma Mariano suggests the paste will fry a bit, adding a unique flavor to your sauce). Reduce heat and allow vegetables to simmer for about ten minutes. After ten minutes of simmering, add the lamb chops (or pork or veal). After stirring the meat into the base, add a 1/2 cup of red wine and a fistful of fresh basil. Once all the basil and vegetables have reduced, add three cans of crushed tomatoes. Fill one of the empty tomato cans with water and add to sauce. Stir the sauce continuously over low heat for the next several hours. As the sauce reduces, the acidity of the tomatoes will rise. Add sugar to balance the flavor. Add the remaining wine and another can of water. Remember to continuously stir the sauce from the bottom to avoid burning. The sauce will usually take a total of about four hours to cook.