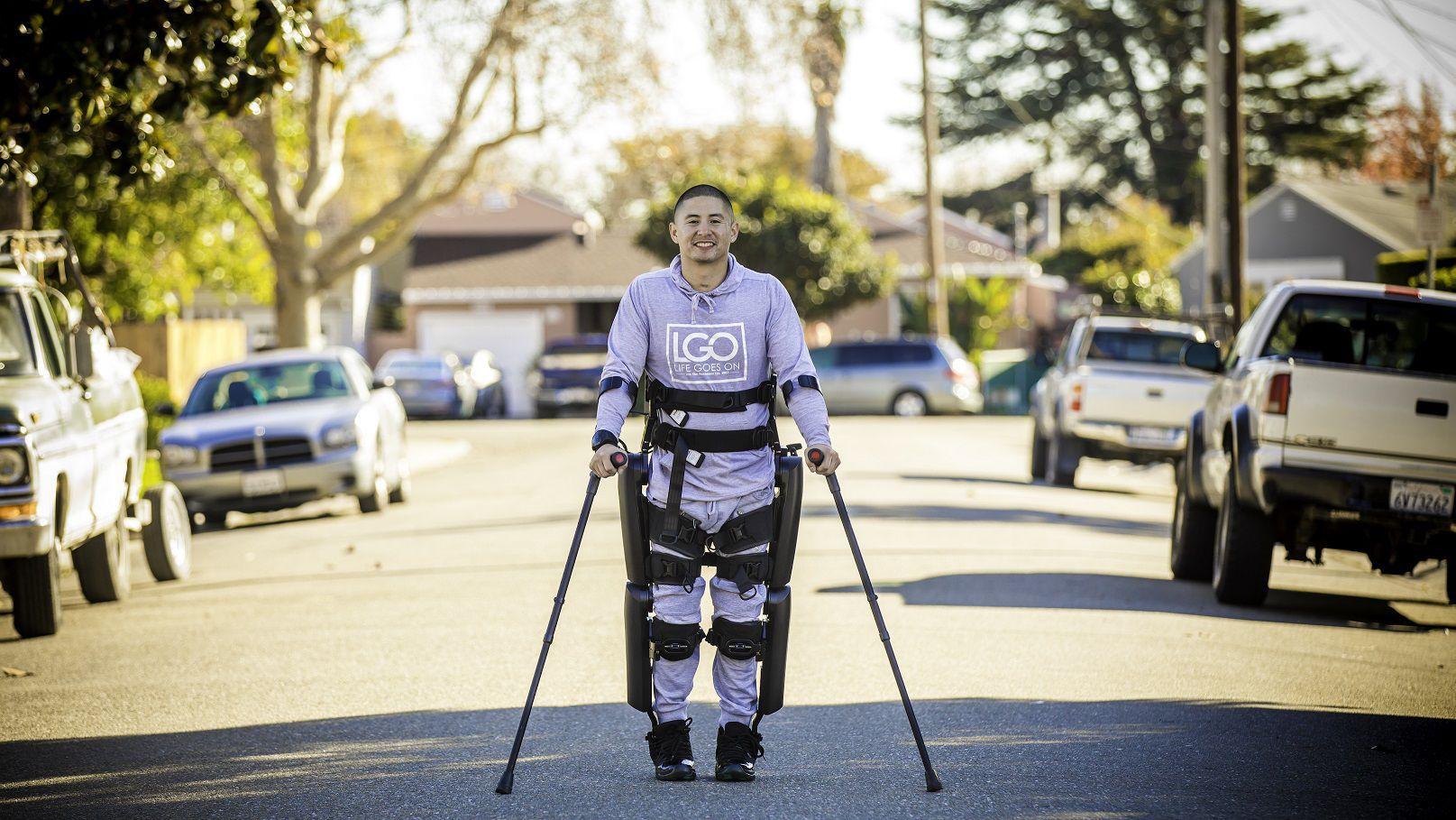 Arthur Renowitzky can’t help but command attention as he walks down the street on a sunny autumn morning.

A driver lowers her window to flash a smile and a thumbs-up. “You got this,” she says. A neighbor waves from his front yard. “Go get ‘em A.R.”

Renowitzky has been paralyzed since 2007 after being shot in the chest for $20 and a fake gold chain. But he can stand and walk, using crutches for balance, when wearing an exoskeleton suit with motorized hips and knees powering his movements.

Wearable robots aren’t new. DARPA has been funding their development since the early 2000s with the aim of building motorized armor to enhance soldiers’ strength and endurance. Panasonic, Ekso Bionics and others offer upper-body suits that help construction and factory workers lift heavy loads. But their most powerful promise may be in helping people regain control of their bodies.

Therapeutic exoskeletons are found mainly in hospitals and rehab centers, where they help increase strength, fight muscle atrophy and encourage blood circulation. The current generation, from companies like ReWalk, Ekso Bionics, Rex Bionics and SuitX, can be bulky, with a gait best described as robotic. Users can walk with them only on solid, level surfaces and need crutches for balance and support. Still, they’re life-changing for paraplegics like Renowitzky.

“It brought tears to my eyes to be eye level with the world again and know that technology is advancing so rapidly,” says Renowitzky, 29, describing the first time he stepped into the 50-pound ReWalk.

Get up, stand up

Nearly 6,000 miles away, Mark Daniel walks along the shore of the Limmat River that runs through Zurich’s Old Town.

The day before, Daniel, 27, had competed against six others in a powered exoskeleton race, where robot-assisted athletes performed six everyday tasks, like climbing stairs and sitting down. He placed second.

Daniel has been testing motorized legs at Florida’s not-for-profit Institute for Human and Machine Cognition (IHMC) since 2010, but this was the first time he got to sightsee in them.

“To be walking down the sidewalk outside was a real heartfelt moment for me,” he says. “I just stood there at the river for I don’t know how long and absorbed it.”

So far, only a handful of companies around the world have regulatory approval to sell exoskelestons for home use. Renowitzky is one of the lucky few to have an exosuit to call his own.

Yet about 17,000 people a year suffer from spinal cord injuries in the US alone, according to the National Spinal Cord Injury Statistical Center. For them, rehab is critical. A key part of that is getting them out of bed and moving as soon as possible, says Tom Looby, CEO of Ekso Bionics, citing the Kessler Foundation, a nonprofit focused on rehabilitation research. It found that exosuits helped to improve patients’ oxygen consumption, ventilation and heart rates. Patients could also walk faster and farther.

“Why do steps matter? Repetition,” says Looby. “If you can discharge people with a higher degree of capability, the thought is you can reduce complications, reduce the lifetime care costs and make people healthier, longer.”

Those complications can be both painful and costly. Patients with spinal cord injuries frequently experience cardiovascular disease, bone density loss, urinary tract infections, chronic pain and pressure ulcers, which can require hospitalization and even surgery.

Universities, clinics and tech companies are working to make motorized hips and legs lighter and thin enough to tuck under clothing. Their ultimate goal: to develop suits that feel like second nature to walk in, allowing users to move more quickly and over rougher terrain, turn and sidestep, says Peter Neuhaus, senior researcher at IHMC.

Right now, for example, users have to consciously balance themselves when they take a step. The IHMC wants robotics to take over more of that responsibility.

Neuhaus and his team have built an exoskeleton with powered ankles that can be adjusted for stiffness and angle. These might someday allow users to walk faster and stand without crutches.

And researchers around the world have been working on ways to control exoskeletons by thought alone. We saw one example three years ago, when Juliano Pinto used a mind-controlled suit to kick off the World Cup in Brazil.

Beyond the obvious advantage, such systems could keep the motor-controlling segments of the brain active and elastic, potentially helping patients move more on their own, says Jose Contreras-Vidal, director of the University of Houston’s Laboratory for Noninvasive Brain-Machine Interface Systems. “If we’re talking about recovery of function, you’ll want to act on those brain areas that are involved in walking.”

In the U.S., the ReWalk and Parker Hannifin Indego are the only exoskeletons people can buy for personal use. They both cost $80,000.

Renowitzy got his ReWalk two years ago after a stranger named Eugene Yoon heard his story and decided to hike the 2,650-mile long Pacific Crest Trail to help raise money in a crowdfunding campaign.

Renowitzy sometimes wears the exosuit when speaking for the Life Goes On Foundation, which he founded in 2008 to help victims of spinal cord injuries and gun violence. He also brings it to his childhood playground, where he walks around a track and takes in views of the nearby San Francisco Bay.

People who see him there often ask about his robotic legs.

“I don’t mind sharing that with strangers,” he says. “It’s part of my life.”

So much so, he calls his exoskeleton “my buddy,” and walking in it still gives him a high.

“It’s an amazing feeling that will keep going throughout my day — even as long as a week,” Renowitzky says as he presses a button on his wrist-worn controller to switch the battery-powered ReWalk to seated mode, then uses upper-body strength to slide back into his wheelchair.

This story appears in the spring 2017 edition of CNET Magazine. For other magazine stories, click here.