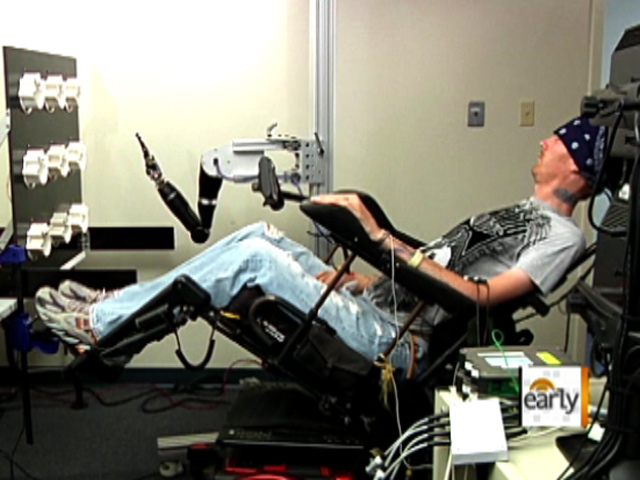 There's new hope for the disabled: Researchers at the University of Pittsburgh Medical Center wanted to see if paralyzed patients could move robotic limbs using nothing but their brains.

Combining mind and machine could improve the lives of millions of people.

Tim Hemmes was part of a clinical trial. It lasted only 30 days, but what was accomplished is giving new hope to spinal cord patients around the world.

A simple touch on the hand is a basic gesture most people take for granted. But for many spinal cord patients, it's something they only dream of.

"I saw my mom reach down and pick my daughter up to lift her up to wash her hands for dinner. That was the defining moment of standing up and lifting her up. I realized, I can't do that. That was very hard for me," Hemmes said.

As Jeff Glor reports, this month, Hemmes became the first man in the world to control a bionic arm with his mind. "Is it 'Star Trek'-like? I don't know, maybe a little bit, but this is something that I did, so it's not a movie," he said.

Hemmes always pushed himself to stay active: He played hockey, loved being outdoors and loved riding his motorcycle.

It was a motorcycle accident in July 2004 that left Hemmes a quadriplegic. "The last thing I was doing before my accident was putting my daughter to bed. I laid her down and went out for a bike ride that night. I saw a deer, swerved and hit gravel. I had a helmet on and that's basically what saved my life," he remembered.

He was alive, but the life he knew was gone. Hemmes spent months in a nursing home, depressed, before realizing he needed a way to connect to his family.

That led Hemmes to an experimental program called "Revolutionizing Prosthetics," that would enable him to test whether or not brain signals could stimulate movement in a robotic arm.

Up until this point, robotic prosthetic arms required muscle contractions to trigger a tiny computer to make the arm function. Doctors hope that, by inserting tiny electrodes into the brain of paralyzed patients -- without these muscle functions -- will have a new way to do more on their own.

"Tim is quadriplegic, so he has no motion from the neck down," Dr. Elizabeth Tyler-Kabara, from the University of Pittsburgh School of Medicine, explained.

During the first few days in the lab, Hemmes discovered just how tough all of this may be. "I was trying to move my arm left, I was trying to think left. The grid was able to pick up the signals that I was firing to go left, the computer was understanding what my brain was telling it," he said.

"But that wasn't good enough for him, so then we had to keep going," Dr. Tyler-Kabara said.

On the second-to-last day, Hemmes was able to reach out and give one of the scientists a high five.

Then something unexpected happened. "There is nothing about this that wasn't fascinating," Dr. Tyler-Kabara remembered. "While the first reach was sort of this scientific triumph, the second reach had all this emotional component to it."

"You could have heard a pin drop, it was, 'Wait, this is his moment, this is their moment, we're going to be quiet and let this happen,"' she added.

"It wasn't my arm. It was something hydraulic and plastic and metal, but I put it there. She reached out her hand and looked at me and said,'Baby hold my hand,"' Hemmes remembered. "It was something very personal and something that I'll take with me for the rest of my life, 'cause I just reached out and grabbed somebody after seven years."

Today, Hemmes still depends on his loved ones for his basic needs, but believes what was accomplished is the first step to gaining back his independence.

"So was I ambitious? Hell yeah, I was ambitious. I want to get my life back. I wanna, I have a goal, I have an end goal and this is the first step," he said.

Now that Hemmes has proven this form of brain stimulation can work, the plan is to test the device with more patients.